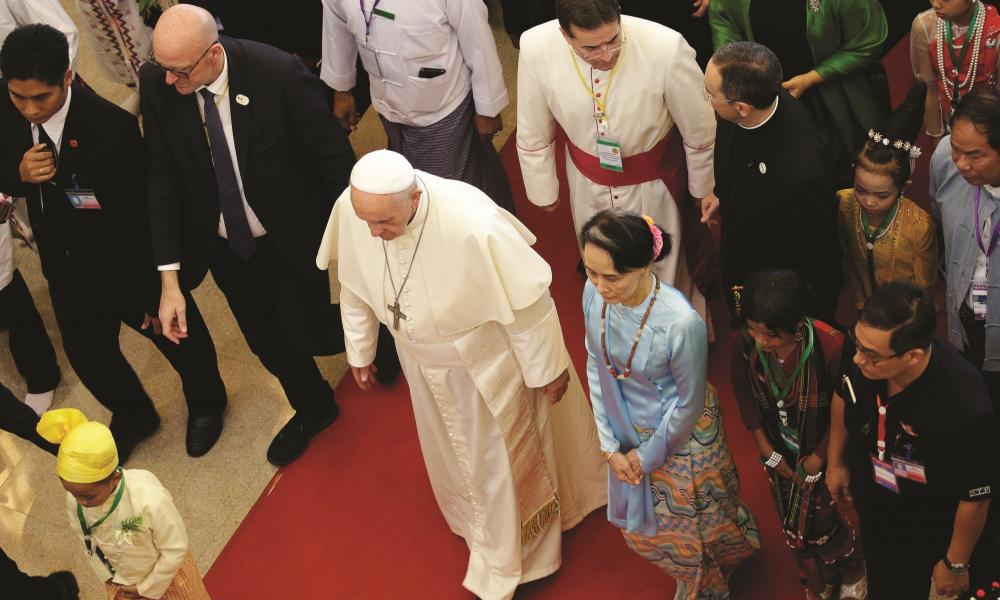 ‘The Future Must Be Peace’

Six months after formal relations were established between the Vatican and Myanmar, Pope Francis traveled to the country in late November to show solidarity with the small Catholic community there. He met with bishops and Buddhist leaders, and celebrated Mass with thousands of young people. He then traveled to Bangladesh, where he met with Rohingya refugees, a Muslim minority group who has fled Myanmar in huge numbers because of violence against them. He said, “The presence of God today is also called ‘Rohingya.”

In a speech in Myanmar, the Holy Father said: "The future of Myanmar must be peace, a peace based on respect for the dignity and rights of each member of society, respect for each ethnic group and its identity, respect for the rule of law, and respect for a democratic order that enables each individual and every group – none excluded – to offer its legitimate contribution to the common good.”

The Mass is ‘the triumph of Jesus’

Stressing the importance of the Mass in a series of general audiences, Pope Francis explained in late November: “This is Mass: to enter into Jesus' passion, death, resurrection and ascension. When we go to Mass, it is as if we were going to Calvary, it's the same.” He reiterated that the Mass is not simply a “memorial,” remembering an event from the past. Instead, when we are at Mass and we truly enter into Jesus’ passion and make that event alive and present, we are transformed and strengthened to go forth and bear witness. He said: “Every celebration of the Eucharist is a beam of that sun that never sets, which is the risen Jesus Christ. To take part in Mass … means entering into the victory of the resurrection, being illuminated by his light, warmed by his heat.”

November 26 - “Let us look to Jesus today and say to him in our hearts: ‘Remember me, Lord, now that you are in your Kingdom!’”