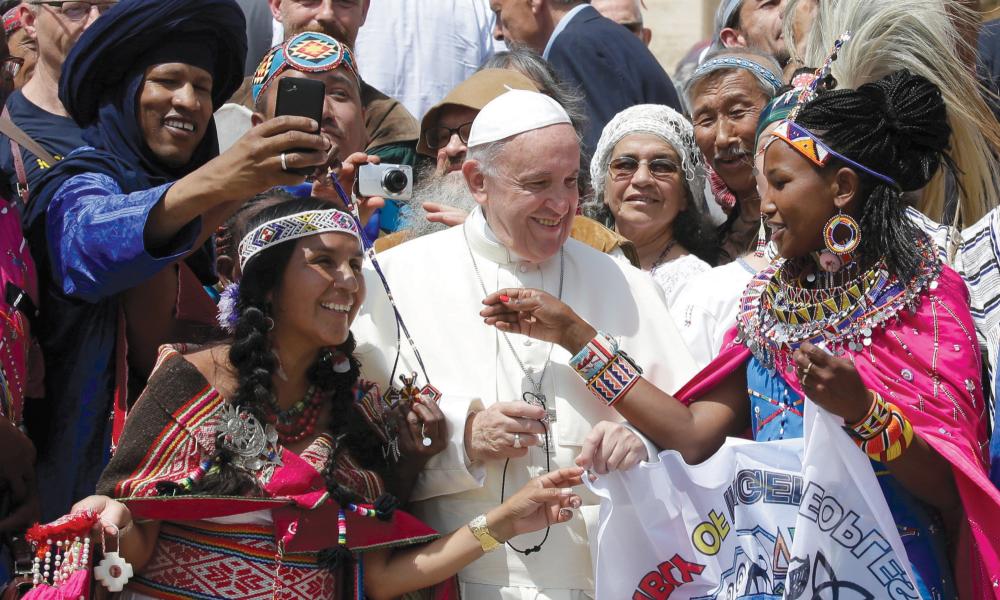 Pope Francis greets members of the Assembly of Indigenous Peoples after the General Audience in St. Peter’s Square at the Vatican on May 30.

In gratitude for the gifts of the Spirit

In a recent homily, Pope Francis spoke of how the sacrament of confirmation “invokes a new outpouring of the Holy Spirit” and renews the promises made at baptism. He continued, “Just as Jesus received the outpouring of the Spirit at his baptism in order to carry out his messianic mission, the Church prays that we, too, may receive the gifts and fruits of the Spirit that enable us to help the body of Christ grow in unity and missionary zeal.” We receive the gift of the Spirit through the laying on of hands and anointing with chrism at our confirmation. He encourages us to use this gift and “open our hearts ever more fully to the creativity of the Spirit who makes all things new.”

In his new film entitled Pope Francis – A Man of His Word, writer and director Wim Wenders makes clear his desire to allow the audience to really encounter the pontiff. As the name of the film implies, by walking with Pope Francis while he faces the problems of today’s world, the viewer is able to see the pope as a man true to his word. The goal is for the audience to see that Francis truly does practice what he preaches, and strives to live in the footsteps of his namesake, St. Francis of Assisi, in his care for the poor and weak of society.

The film, which was released in May, shows Pope Francis, not deterred by the many problems the world faces today, as a man courageously and passionately dedicated to speaking out about global problems and then, as a man of his word, walking with all people toward the peace and charity of Christ.

Pope Francis’ Monthly Prayer Intention for August
For those who have responsibility in economic matters: That any far-reaching decisions of economists and politicians may protect the family as one of the treasures of humanity.