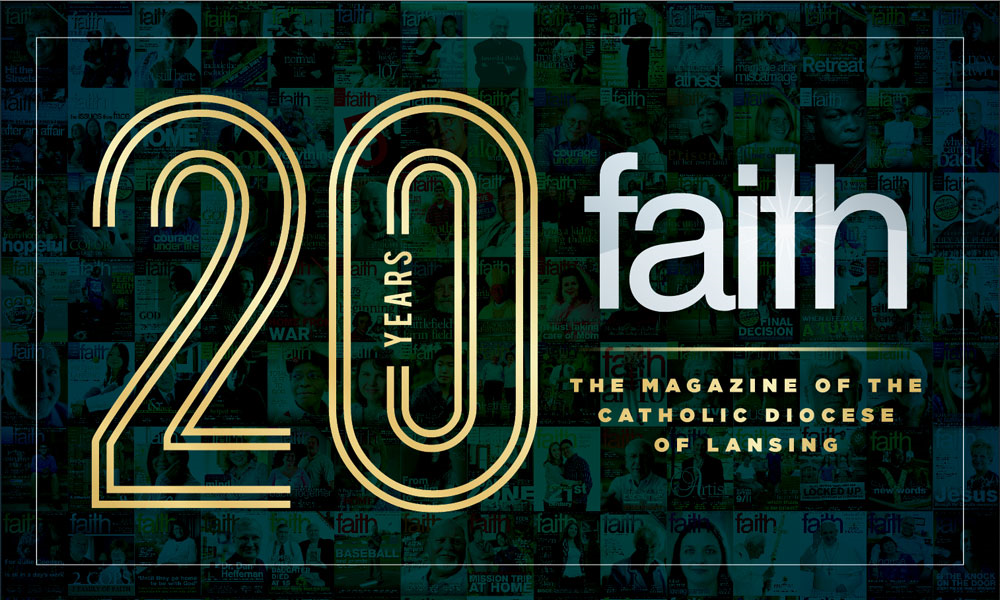 Thank you, readers, for 20 years of FAITH

I got my first experience of working on a magazine while I was still a seminarian at Mundelein Seminary in Chicago. During my time there, I had become the editor of The Bridge, which at that time was the school’s semiannual newsletter to alumni and friends of the seminary.

During my time as editor, a young Lansing seminarian named Patrick O’Brien joined the staff of The Bridge. Patrick came to Mundelein with an extensive background in publishing and advertising. As the seminary prepared to celebrate its 75th anniversary in 1997, Patrick felt The Bridge should be completely revamped, transforming it from a newsletter into a full-fledged and full-color magazine. Patrick convinced me that as editor all I had to do was walk into the rector’s office, present a mock-up of what a seminary magazine could look like, get the rector to agree to the change, and then ask for several thousand dollars in order to purchase an Apple Macintosh computer and some very expensive magazine publishing software. Somehow, despite my trepidation, it turned out to be just about as simple as Patrick had outlined. The rector agreed to the concept, funds were allocated, equipment and software was purchased, and The Bridge became a magazine. And thus the idea that would eventually become FAITH Magazine began to take shape.

Father Charlie Irvin, the founding editor of FAITH, was also my pastor while I was in seminary. He saw and very much liked The Bridge. It also happened that Bishop Carl Mengeling, who was then bishop of the Diocese of Lansing, was looking for a new and innovative way to reach out to the people of our diocese as part of the New Evangelization that was so important to St. John Paul II. Father Charlie and Bishop Mengeling both became convinced that the best way to do this would be through a completely brand-new concept – a diocesan magazine that would tell stories of faith by sharing the faith of the people of the diocese. It would combine beautiful and faith-filled stories with beautiful images and design to become a new means of connecting Jesus with people of faith and people who were seeking faith in God. Patrick O’Brien, who just two years earlier had been instrumental in transforming The Bridge, had left seminary. He hadn’t left behind his faith or his creativity, and he was eager to help with the idea of FAITH. Working with Bishop Mengeling, Father Charlie and several other priests of our diocese, a concept for FAITH was created and envisioned as a way of launching our diocesan celebration of the New Millennium.

In the summer of 1999 a small office for FAITH was procured at the diocese. With a tiny staff that included Father Charlie Irvin, Patrick O’Brien, Jillane Job and several others, the work of FAITH began. Our first issue was published in January 2000, and what started as an idea became a reality with the support and creativity of so many. You can learn how FAITH has grown by reading Patrick O’Brien’s column on page 2. I joined the staff in 2000 as associate editor and was appointed editor in chief in July 2001. Suffice to say, I could never have imagined what FAITH would become over the last 20 years. My thanks go to Bishop Mengeling and Bishop Boyea for their support and guidance. Thanks to the many who have allowed us to share their stories of faith through the years. Thanks to the very talented staff, writers and contributers whose creative genius makes possible the work of FAITH in what has become a multi-faceted company. Thanks to the parishes and pastors whose financial support continues to make FAITH available to the people of our diocese. Thanks to our readers who encourage and challenge us. Thanks to those who pass each issue of FAITH along to neighbors, family or friends. Most of all, thanks be to God for the gift of faith we have the honor to share on these pages. And so, our journey in FAITH continues.