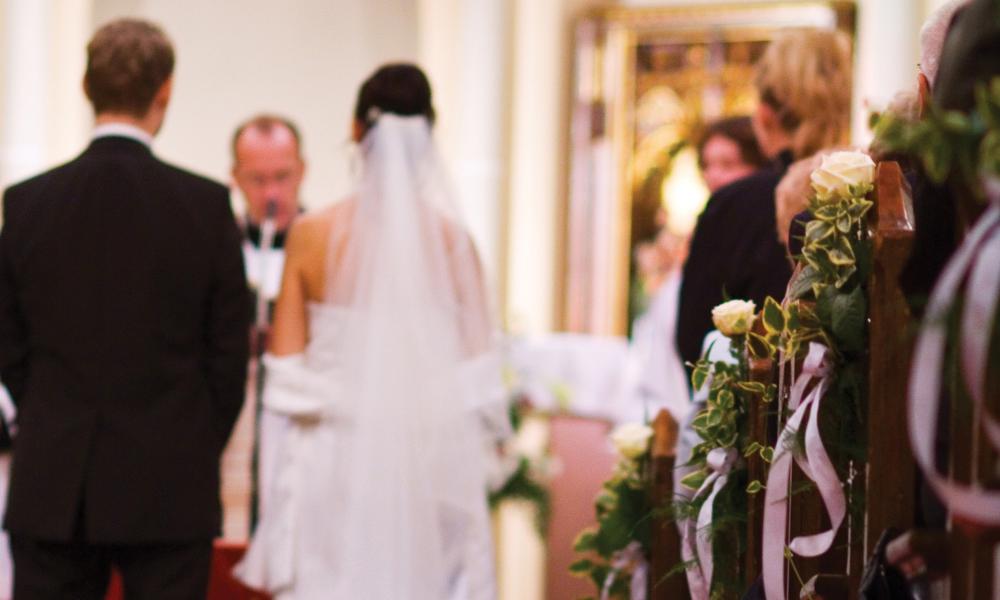 In the current debate over gay marriage, people sometimes ask: Who should define marriage? Democrats or Republicans in Congress? The Supreme Court? Should it be put to a referendum, allowing the majority to choose a definition?

We can identify two kinds of “definitions” when it comes to marriage. The first touches on the essence, the objective reality, or the truth about marriage. The second involves a legal or political position, advanced through the media, judicial decisions, or other legislative means. While these secondary definitions of marriage can be of interest, their true level of importance is properly gauged only in reference to the first and objective definition.

Notable errors are sometimes made in these secondary definitions of marriage. In the mid-1960’s, to consider but one example, prohibitions existed in more than a dozen states which outlawed persons of different races from marrying one another. A white man and a black woman could fall in love in those states, but could not legally tie the knot. The Supreme Court overturned those restrictions in 1967, recognizing that the ability to enter into marriage doesn’t depend on the skin color of the man and woman getting married.

Gay marriage advocates today sometimes attempt to draw a parallel between such mixed-race marriage laws and state laws that would prevent two men (or two women) from getting married to each other. They suggest that legally forbidding two men from getting married stigmatizes those men in much the same way that preventing a black man from marrying a white woman stigmatized both of them. Yet there is really no parallel at all between the two cases. While marriage as an objective reality is certainly color-blind to the racial configuration of the spouses, it can never be “genital-blind,” because male-female sexual complementarity stands squarely at the heart and center of marriage itself.

“The human race is divided into two sexes whose reason for existence is physical union with a view to continuing the species.” More recently, Professor Robert P. George similarly described marriage as “a union that takes its distinctive character from being founded, unlike other friendships, on bodily unity of the kind that sometimes generates new life.” There are many kinds of love, ranging from maternal love to brotherly love to love of friends to love of neighbor to romantic love, but only one that is proper and integral to marriage, namely, spousal love with its inscribed complementarity and potential for human fruitfulness.

Marriage teaches us that men need women and women need men and that children need both mothers and fathers. In this sense, marriage and the family represent foundational realities, not constructs that can be invented, defined, legislated, or determined by popular vote or culture. Marriage, in fact, is the “primordial first institution,” flowing out of the intimate and creative union of male and female. It precedes other societal institutions and conventions, and is essentially ordered towards creating and caring for the future in the form of the next generation. Marriage is a given reality that we come to discover in its authentic design, not a concept for us to “define” according to our own agenda or desires.

Gay marriage proponents deny these foundational truths about marriage. Through vigorous legislative efforts, they are striving to impose a profoundly false redesign for marriage upon society so that, in the words of Professor George, marriage becomes “an emotional union for the sake of adult satisfaction that is served by mutually agreeable sexual play,” thereby undermining its intrinsic connection to complementary bodily union between men and women. This forced reconfiguration of marriage is no more defensible than the efforts of those who socially or legislatively attempted to impose a notion of “racial purity” upon marriage or society in former times.

Rev. Tadeusz Pacholczyk, Ph.D. earned his doctorate in neuroscience from Yale and did post-doctoral work at Harvard. He is a priest of the diocese of Fall River, MA, and serves as the Director of Education at The National Catholic Bioethics Center in Philadelphia. See www.ncbcenter.org.