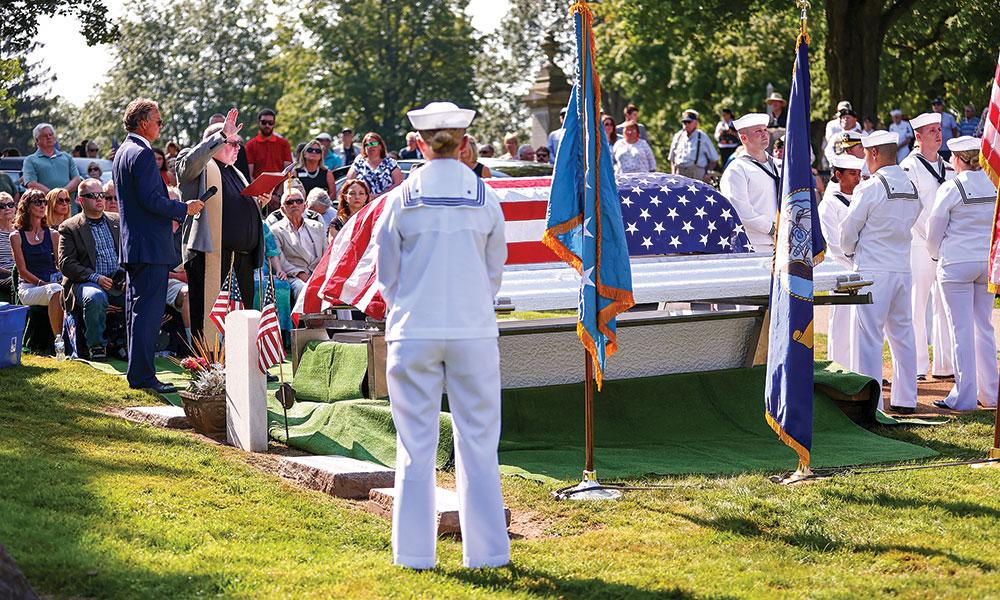 Giving Thanks for Selfless Service

Navy Ensign Francis Flaherty was born in March of 1919, and grew up in Charlotte, Michigan. He was a parishioner of St. Mary parish, the parish I pastor today. From what I have learned, Francis was a popular member of his high school class and had dreams of one day becoming a physician. He attended the University of Michigan, and following his undergraduate studies, he enlisted in the United States Navy. Ensign Flaherty was assigned to the battleship USS Oklahoma. His duties included leading a gun crew in one of the ship’s massive turrets. He and his crewmates found themselves aboard the Oklahoma in Pearl Harbor, Hawaii, on Dec. 7, 1941.

The Oklahoma was mortally wounded early in the Japanese attack. Having suffered massive damage from a number of torpedoes, the ship began to slowly roll over and the alarm was sounded that all personnel should abandon ship. In that moment, recognizing what was happening and the peril faced by his crewmates, Francis grabbed a flashlight and used it to point the way to safety for the members of his gun crew. The turret’s crew would escape, but Francis, along with more than 400 other sailors aboard the Oklahoma, would lose his life that day. Francis bravely stayed at his post and guided others to safety at the cost of his own life. For his actions, Francis was awarded the Congressional Medal of Honor, our nation’s highest military award.

At the time of his death it was not possible to identify Francis’ body, and so he and many others were buried as “Unknowns” in the National Memorial Cemetery of the Pacific located in Honolulu, Hawaii. However, thanks to advances in science and the Navy’s dogged determination, Francis’ remains were positively identified near the end of 2019.

Surviving members of his family were notified and then began the process of bringing Francis home so he could finally be laid to rest in Maple Hill Cemetery in Charlotte, his hometown.

On Aug. 21 of this year, folks from all around mid-Michigan gathered to support members of Francis’ family as his mortal remains were buried next to his parents in a grave that had, for many years, been marked by a solitary military-style headstone. With high-ranking members of the Navy present as well as many area veterans and hundreds of grateful townspeople, we had the opportunity to prayerfully acknowledge Francis’ death nearly 80 years ago, bringing what I hope is a sense of closure and peace for his family. I doubt that I will ever again have the opportunity to take part in such a solemn ceremony.

During the month of November, the Church recalls and prays for all the faithful departed, as we celebrate the Feasts of All Saints and All Souls. As a nation, we will also mark Veterans’ Day. I know these occasions will have a more intense meaning for me this year. I hope that all of us will pause on these days ahead to think about and to pray for those who have gone before us marked by the sign of faith, as well as those who so freely gave what they could to protect us and keep us safe. Let us be thankful for so many examples of faith and selfless service. And so, our journey in FAITH continues.