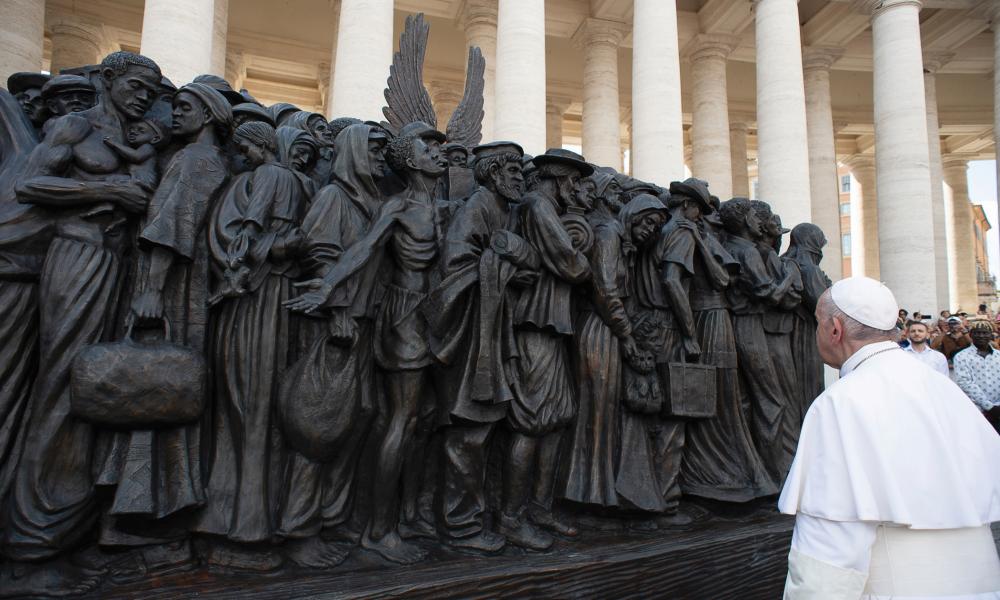 In observance of the 105th World Day of Migrants and Refugees on Sept. 29, Pope France unveiled the sculpture “Angels Unawares,” after celebrating Mass and leading the Angelus in St. Peter’s Square for 40,000 faithful. The work, by artist Timothy Schmalz of Canada, is inspired by St. Paul’s Letter to the Hebrews: “Do not neglect to show hospitality to strangers, for thereby some have entertained angels unawares.” (13:2)

“The elderly and the young, together. This is the sign that a people cherishes life, that there is a culture of hope: the care of the young and the elderly.”

Dialogue and Reconciliation in the Near East

That a spirit of dialogue, encounter, and reconciliation emerge in the Near East, where diverse religious communities share their lives together.

On Oct. 5, the pope created 13 new cardinals from 13 different nations. The choices represent the variety of ways the Church works to spread the Gospel. Several come from developing countries, such as Cuba, Congo and Guatemala, and two serve in the predominantly Muslim countries of Morocco and Indonesia. They are a sign of “the missionary vocation of the Church that continues to proclaim the merciful love of God to all men and women on earth.

Third Sunday in Ordinary Time declared the Sunday of the Word of God.

On the inauguration of the 1600th anniversary of the death of Scripture scholar St. Jerome, Pope Francis issued an Apostolic Letter declaring that the Third Sunday in Ordinary Time will be called the Sunday of the Word of God. Devoted to the celebration, study and dissemination of the word of God, Pope Francis also described it as a way to “strengthen our bonds with the Jewish people and to pray for Christian unity."