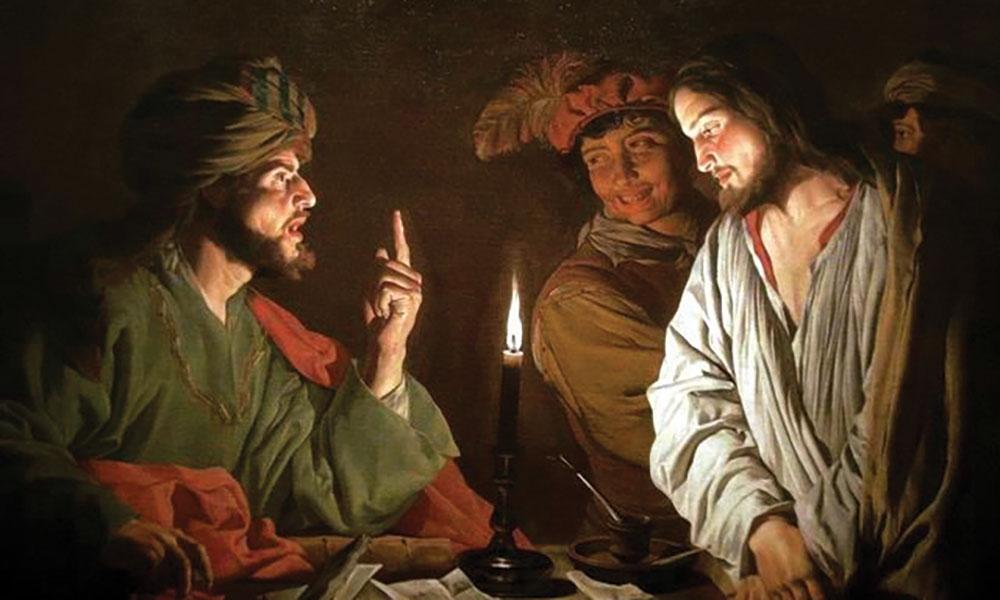 Theology 101 is taking a peek behind the scenes of some of the prominent figures, groups and events referenced in the New Testament. The goal is to provide a deeper context for the drama of salvation that sacred Scripture communicates to us.

So the chief priests and the Pharisees convened the Sanhedrin and said, “What are we going to do? This man is performing many signs. If we leave him alone, all will believe in him, and the Romans will come and take away both our land and our nation.” But one of them, Caiaphas, who was high priest for that year, said to them, “You know nothing, nor do you consider that it is better for you that one man should die instead of the people, so that the whole nation may not perish.” (Jn 11:47-50)

The Gospel of John tells us that this fateful meeting of the Sanhedrin was prompted by Jesus’ raising of Lazarus from the dead. With such signs, the Sadducees and Pharisees saw Jesus’ popularity growing among the masses. They feared that, if left unchecked, the crowds might very well elevate Jesus to the status of Messiah and king. Of course, such an action, they reasoned, could very well antagonize the Romans, who would most assuredly seek to squash any attempt to disrupt the established governing structure of Judaea and Jerusalem. This would naturally mean the end of their own power and status. Not surprisingly, Caiaphas’ words struck a resounding chord in the Sanhedrin, as the Gospel indicates they began actively plotting to take Jesus’ life. So who was this man, Caiaphas, who wielded such influence in Jerusalem?

In reality, we know next to nothing about Caiaphas prior to his ascendancy to the role of high priest in Jerusalem. One can assume he came from a wealthy family, as he ended up marrying the daughter of Annas, the high priest from 6 to 15 A.D. Caiaphas soon followed in his father-in-law’s footsteps. According to the Jewish historian Flavius Josephus, the Roman governor, Valerius Gratus, named Caiaphas high priest in 18 A.D. He would go on to hold the position until 37 A.D., when the governor of Syria, Lucius Vitellius, removed him from office. His tenure would be the longest of the 19 high priests who served in the first century A.D. Caiaphas was succeeded by his brother-in-law. However, five of his sons would also go on to hold the title of high priest.

At the time of Jesus’ public ministry, Galilee was governed by Antipas, who was granted sovereignty within Galilee as long as he remained loyal to Rome and successfully maintained peace and stability in the region. Judaea was governed by Pontius Pilate. Pilate had succeeded Valerius Gratus in approximately 26 A.D. While Jerusalem fell under Pilate’s authority, the day-to-day rule of the city fell to the high priest and his council, that is, to Caiaphas and the Sanhedrin. Caiaphas and the Sanhedrin were to maintain order and ensure that tribute was paid by serving as mediators between the Roman governor and the local population, which resented Roman occupation. Obviously, this was no easy task. For example, one need only read the Gospels to learn how tax collectors were viewed by the people of Judaea.

As high priest, Caiaphas also had a religious role. He would have had authority over all Temple finances and administration. More importantly, as high priest, he alone would have been permitted to enter the Holy of Holies on the Day of Atonement to burn incense and offer sacrificial animal blood for the expiation of his own sins and the sins of all Israel.

The Catholic Encyclopedia indicates that the offering of sacrifices to God was originally the function of the father, or head of the family, in the age of the Patriarchs. However, after the law was given at Mt. Sinai, the priesthood became a special class in the community when God chose Aaron to “discharge permanently and exclusively all the religious functions.” Aaron, from the tribe of Levi, was made the first high priest.

Interestingly, the one Caiaphas plotted to kill would himself become the high priest who would offer his heavenly Father all the acts of his human will and his very self as the supreme sacrifice for the sins of humanity. As our eternal high priest, Jesus worships, praises and thanks the Divine Majesty in his own name and in the name of his people. As the head of the human family, he intercedes before the Father for us. Being heard by the Father, he keeps sending down blessings on us from his heavenly home.

The high priest was not permitted to approach the dead, or even mourn the dead, lest he be defiled. Contrast this with the witness of Jesus, the eternal high priest, upon hearing of Lazarus’ death. In addition, the office of high priest was originally hereditary and for life. However, bribery later influenced appointments, and, ultimately, high priests, such as Caiaphas, were appointed by government officials. There has been no Jewish high priest since 70 A.D., as national sacrifice ceased with the destruction of the Second Temple.

In the Gospel of John, Jesus is arrested, but he is not brought to Caiaphas directly. Instead, he faces an inquiry from this person …