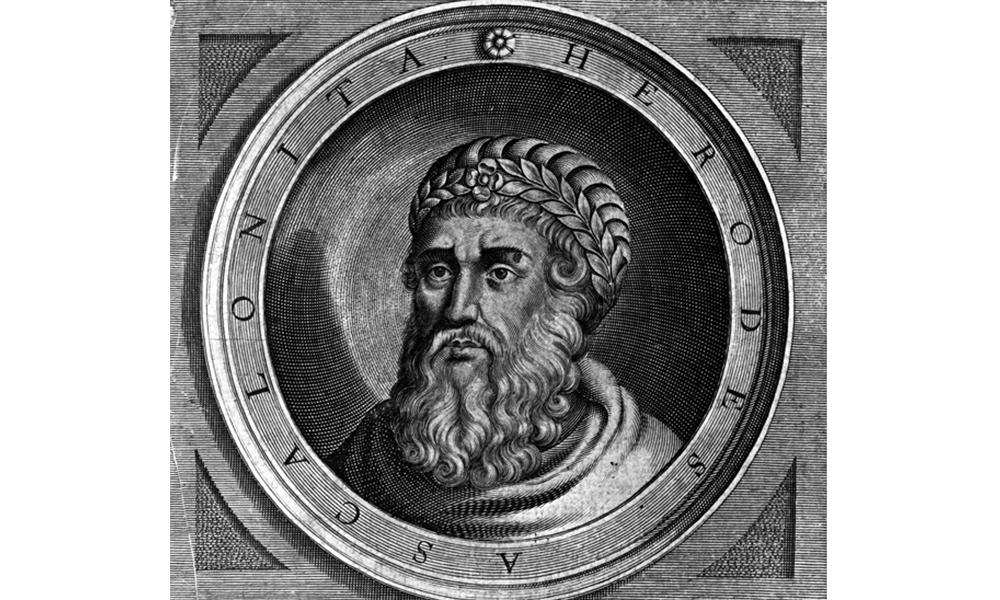 Who exactly was King Herod of Jesus’ time?

This year, Theology 101 will take a peek behind the scenes of some of the prominent figures, groups and events referenced in the New Testament. The goal is to provide greater context for the drama of salvation, which the Scripture communicates to us.

The Gospel of Matthew tells us that King Herod was gravely concerned when the visiting Magi informed him of the birth of the “newborn king of the Jews.” (2:2) Then, when the Magi failed to return to him with the precise location of this baby king, he grew furious and ordered the massacre of all the boys two years and under in Bethlehem and the surrounding area. (2:16)

THE RISE OF HEROD

In 63 B.C., a Roman military force led by Pompey forced the Hasmoneans, a Jewish dynasty in control of modern-day Israel, to submit to Roman rule. Herod and his father, Antipater, supported the Roman campaign and were subsequently rewarded. In the short span of 20 years, Antipater, Herod and Phaesael, Herod’s oldest brother, basically ruled the Jewish land.

Twenty years later, Antipater was poisoned and died. Three years later, the Parthians conquered Jerusalem and killed Phaesael. Herod fled to Rome to escape a similar fate. Once there, Herod gained the support of Octavian and Mark Antony. The two Roman legends agreed to name Herod king of Judea, and backed his retaking of Jerusalem in 37 B.C. with Rome’s military might.

In five years’ time, the alliance between Octavian and Mark Antony collapsed into civil war. Herod sided with Antony, even though Antony had given some of Herod’s best territory to Cleopatra VII. The bet did not pay off, as Antony was defeated by Octavian. Disgraced, Antony took his own life in 30 B.C.

In a desperate move, Herod sought out Octavian. Herod’s only hope was that Octavian would want, as the historian Josephus wrote, “to know not whose friend, but what sort of friend, I have been.” He acknowledged his loyalty to Antony to the end and offered Octavian his crown. The strategy worked as Octavian allowed Herod to keep his crown and even returned the territory Antony had taken from him to give to Cleopatra VII.

THE BIRTH OF A TYRANT

At home, Herod was determined to hold onto his throne at all costs. For example, he faced an immediate challenge from the Hasmonean family. They did not like that the Romans had made Herod king of Judea. In response, Herod divorced his first wife, sending her and their son away from court, and married Mariamne, the granddaughter of the former high priest of the Hasmonean Dynasty, to gain Hasmonean backing for his kingship. The power couple had five children together, although one had died young. However, the lengths that Herod would go to stay in power would soon be revealed.

In 29 B.C., Herod had Mariamne executed over accusations of adultery and scheming to assassinate him. Eventually, he killed his two remaining sons by Mariamne, her brother, her grandfather and her mother. Years later, he murdered his oldest son, whom he had with one of his other wives – he had at least 10 wives. He would go on to accuse three other sons of trying to kill him. In addition to all this palace intrigue, Herod managed to alienate the upper class of Judea by regularly confiscating the property and wealth of anyone he believed did not support him.

King Herod maintained his tight grasp on power until the very end of his life, ordering the execution of a group that tried to pull down an eagle, a Roman symbol, from the Second Temple shortly before he died. Josephus claims Herod was hated more than ever in his last days. In fact, a rebellion broke out in his kingdom after his death that had to be put down by the Roman military.

One thing is for sure, King Herod’s reign was characterized by brutality. He quickly acted to eliminate any threat to his power, real or otherwise. If this meant killing his own children, so be it. It is little wonder, then, that he would react as Matthew tells us he did when he learned of a potential new threat in Bethlehem.

King Herod not only patronized the Olympic Games, but he also served as the president of them. He was also responsible for the building of the Second Temple in Jerusalem. The First Temple, built by King Solomon, was destroyed by the Babylonians in 587 B.C. Unfortunately, the Second Temple was also destroyed, this time by the Romans in A.D. 70. The only thing remaining of this Second Temple today is the famous Wailing Wall.

This successor to King Herod caused Joseph to take Mary and Jesus to Galilee and settle in Nazareth.

One thing is for sure, King Herod’s reign was characterized by brutality. He quickly acted to eliminate any threat to his power,
real or otherwise.