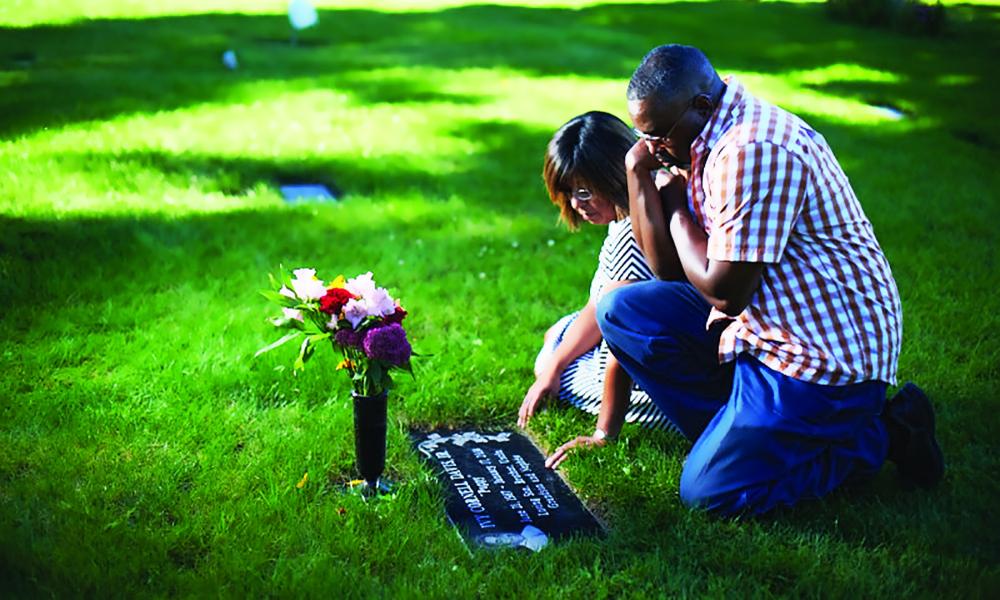 Ivy Davis, Jr. – “Poppy” – was a fun-loving young man who loved to be outdoors hiking, biking and running. He was free-spirited and an easy person for people to be around. It was no surprise to his parents when he landed a job as a concierge at the Ritz Carlton in Phoenix after he moved there to attend Arizona State University.

But just a short time later, Ivy Sr. and Lisa Davis, Ivy, Jr.’s parents, were mired in funeral preparations after their youngest child died at the age of 26 from heart failure.

“That was just the beginning of a long path that we were not ready for,” says Ivy Sr.

Bringing Ivy Jr. home to rest became priority no. 1 for the Davis family. But finding out how to do it wasn’t easy or straightforward.

The Davises, fortunately, found an unexpected helping hand in Joe Dionise, coordinator of the restorative justice ministry and manager of St. Joseph Cemetery in Lansing.

Joe likes to say that a family’s loved one is at the cemetery forever. “This is where you’ll come to visit them forever. This is where you’ll spend time,” he says of St. Joseph Cemetery, off Willow Street in Lansing. “I remember telling Ivy and Lisa that we were going to help them take care of this for their son and their family. They lived through hell. Nobody should have to bury a child, but sometimes they do. And this is why it’s so important for us – in the cemetery ministry – to educate people, before they need us.”

Joe explains that families can purchase some burial needs directly from the cemetery, and they can also purchase markers. “Both,” he says, “are available at a savings from the packages that many funeral homes offer.”

Facing the nearly unbearable pain of having a child die, Ivy Sr. says: “For the first time ever, in my life, I didn’t know what to do. We had to focus to give him a proper funeral and burial.”

When a family member dies in another state and the family wants to transport the body home for burial, there’s significantly more work involved. The body needs to be embalmed and flown home. And only certain airlines will transport and only certain airports will accept bodies.

“There were so many things we just didn’t know how or what to do with this situation,” Lisa says. As they faced the most difficult task of having to bury their son, the Davises felt like no one understood their pain.

“We weren’t getting good answers from anyone we talked to,” says Ivy Sr. “I just kept saying, ‘Tell me what I need to do. We’re bringing my son home to bury him.’ We finally found some answers from my mother’s pastor. He referred us to a funeral home in Phoenix and they told us what we needed to do – we finally felt like someone wasn’t trying to sell us something.”

He and Lisa felt they were at a loss with no one to give them solid answers.

“We just wanted to do things right,” comments Lisa. “This was our baby; we didn’t plan to do this, but he’s still our child. We were coming back to Michigan with him.”

One of the hardest parts of making the arrangements, and not getting good, clear answers, Ivy Sr. says, was that “it took us out of grieving for our son and we became angry. Ultimately, though, it was worth getting angry because we did what we needed to do for our son.”

Ivy Sr. feels he wouldn’t have had to get angry if he just knew more sooner.

“There are packages and they include all these things that you don’t even think about, or need, but when we met with Joe, he told us what we needed and what we didn’t.”

Joe Dionise and his staff met with the Davis family and gave them an idea of what to expect – at the funeral home, at the church and at the cemetery.

“They’ve been so good to us,” says Lisa, and Ivy Sr. agrees.

“Anytime we’ve been (at the cemetery), they hug us and tell us that they’ll take care of us,” Lisa says. “No one anywhere else made us feel like that. We’ve found ourselves sharing our story, and that’s what helps us. We tell people: ‘You can do this and find the strength to do it.’”

For more information on what the Diocese of Lansing cemeteries offer families, contact Joe Dionise at jdionise@dioceseoflansing.org or 517.484.2500.