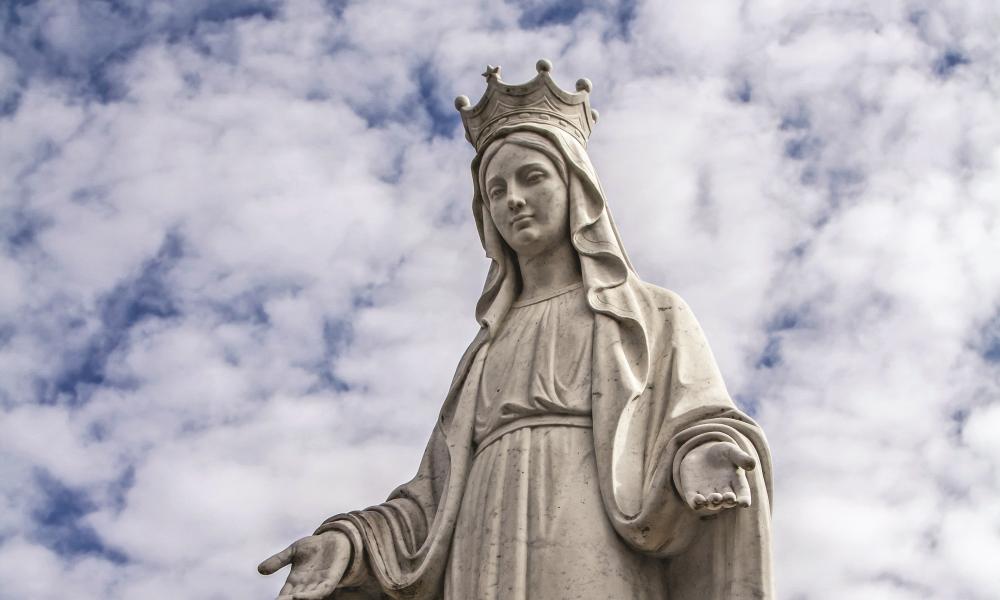 What do you say when a co-worker asks why we worship Mary and the saints?

In 2017, Theology 101 is focusing on the topic of evangelization. Specifically, the task is to offer some ways of approaching various questions Catholics may encounter from co-workers, family and friends regarding the practice of the faith. Of course, we must remember that nothing can replace the power of witnessing to the Good News through our own actions and words combined with our willingness to accompany others on their faith journey.

The Question: What do I say to my Protestant co-worker who asks why we worship Mary and the saints?

In approaching an answer to this question, it would be helpful if you could first find common ground, that is, something about which you and the co-worker can agree. So let’s begin there. Now we know Catholics do not worship Mary and the saints. Catholics worship God alone. So what is the nature of our relationship to Mary and the saints that could give a Protestant co-worker the impression that we do worship them? Well, we pray to them. However, more specifically, we pray to them in order to ask for their intercession, and it is precisely the notion of intercession where we find common ground with our Protestant sisters and brothers.

Intercessory prayer, or prayer that asks on the behalf of another, is a common practice for all Christians. We pray for each other – for all kinds of reasons. When one of our loved ones is sick, we ask those around us to pray for the person’s recovery, whether they personally know our loved one or not. When we are about to face a major challenge or when we are dealing with any kind of adversity, we ask others to pray for us. It is simply a natural part of our shared faith. Catholic Christians do it, Protestant Christians do it – and for good reason.

Build upon the foundation

With intercessory prayer as a point of agreement, you can now begin to elaborate upon the Catholic understanding of the expansiveness of the prayer “network” accessible to us. For the Catholic Christian, the boundary between this earthly existence and a heavenly existence is death, but this does not mean that heaven is a place for the dead. The saints in heaven are very much alive. Therefore, this boundary loses its power and its “sting.” We could say that it does not exist at all for the Catholic Christian, just as the boundary for who we should pray for (a president, a pauper, an enemy, or a soul in Purgatory – a topic for another day) does not exist.

In other words, the prayer circle for a Catholic extends beyond earth to heaven. Consequently, we can just as readily ask for the prayers of Mary and the saints as we can ask our next-door neighbor, or as a Protestant Christian can ask his or her pastor to pray for them.

Why ask for the prayers of Mary and the saints?

One benefit is the faith and devotion of Mary and the saints can support our own weaknesses and supply what might be lacking in our own faith and devotion. The Gospels witness to the fact that Jesus often healed someone based on the faith of another. Perhaps the most striking example of this is the story of the healing of the centurion’s servant in the Gospel of Matthew (8:5-13).

Another reason is found in the Letter of James (5:16): “The fervent prayer of a righteous person is very powerful.” If this is the case, then the prayers of Mary and the saints must be particularly powerful as they have truly been made perfect in heaven (see Hebrews 12:22-23).

Now, this does not mean that Catholics should not pray directly to Jesus, the one Mediator between God and humanity. In fact, Catholics do exactly this, especially in the prayers of the Mass. However, this does not mean we should not also ask our fellow Catholics and Christians, both on earth and in heaven, to pray for us as Christ has allowed us all the privilege of sharing in his one mediation.

Postscript on some necessary distinctions

In addition, there is a difference between worship of God, veneration of Mary and honoring of the saints. Worship, or adoration, is reserved for the Triune God alone. Veneration is an act of great respect or reverence that is offered to Mary as the Mother of God. The honoring of the saints consists in holding them in high esteem due to the heroic virtue they exhibited during their earthly life and due to their place among the heavenly hosts.

Consider prayerfully reading the following passage from the Gospel of John (2:1-10):

On the third day there was a wedding in Cana in Galilee, and the mother of Jesus was there.

Jesus and his disciples were also invited to the wedding. When the wine ran short, the mother of Jesus said to him, "They have no wine." (And) Jesus said to her, "Woman, how does your concern affect me? My hour has not yet come." His mother said to the servers, "Do whatever he tells you."

Now there were six stone water jars there for Jewish ceremonial washings, each holding twenty to thirty gallons. Jesus told them, "Fill the jars with water." So they filled them to the brim. Then he told them, "Draw some out now and take it to the headwaiter." So they took it. And when the headwaiter tasted the water that had become wine, without knowing where it came from (although the servers who had drawn the water knew), the headwaiter called the bridegroom and said to him, "Everyone serves good wine first, and then when people have drunk freely, an inferior one; but you have kept the good wine until now."

1.     What does this passage teach you about the relationship between Mary and Jesus?

2.     What does this passage say about the nature of Mary’s intercessory prayer?

3.     How might this passage help you explain to a Protestant brother or sister why Catholics pray to Mary?

Which Pope said the following?

What does this mean: the communion of saints? It is the communion born of faith and unites all those who belong to Christ by baptism. It is a spiritual union - we are all united! - That is not broken by death but continues in the hereafter. In fact there is an unbreakable bond between us living in this world and those who have crossed the threshold of death. We here on earth, along with those who have entered into eternity, we form one big family. It keeps this familiarity.

Answer: D) Pope Francis in his Angelus Address on the Solemnity of All Saints on November 1, 2014 in St. Peter’s Square.