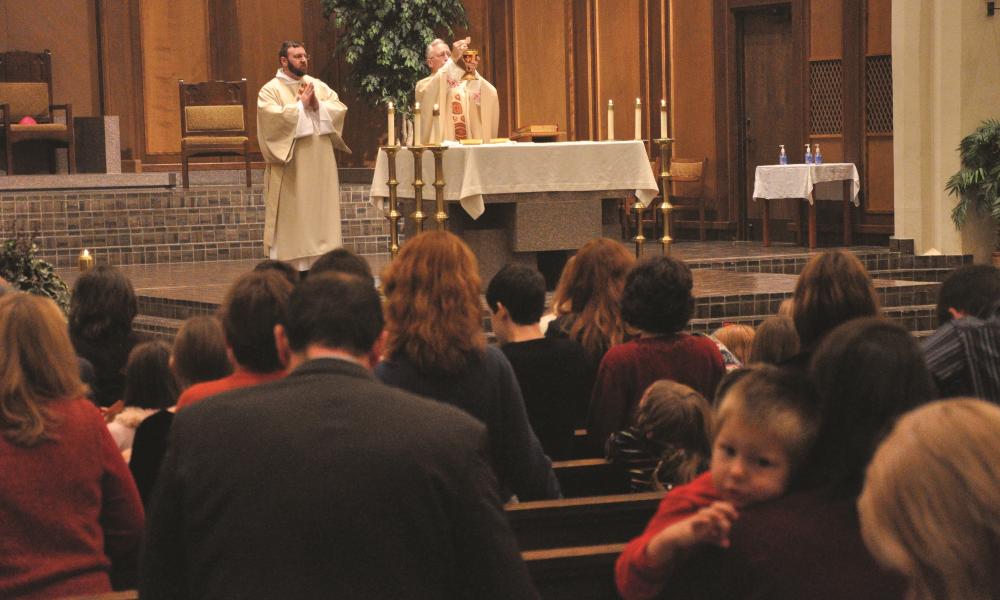 What are some of the different words we’ll be saying at Mass?

Rome has approved our new translation of the Mass which will take effect in November 2011. Why the delay? It will take that long for the publishers to get the books set up and printed for us to use. In the course of this coming year, we are all invited to reflect upon the Mass and what we are doing when we participate in the Mass. Many opportunities to help us accomplish this will be offered both at the parish level and at the diocesan level.

What will be most jarring for some people is to hear, “for many,” instead of, “for all.” A recent article in Antiphon (14:2, pp. 169-229) by Manfred Hauke on this difference of wording is excellent. He surveys the biblical texts, the various liturgical texts, and the testimony of church councils and theologians, and reaches some general conclusions. First of all, Jesus’ suffering and death was directed to the salvation of all, that is, God desires all to be saved and this was the way to provide that blessing. However, not all wish to be saved and thus some are not. Thus he quotes then-Cardinal Ratzinger: God “does not, by some magic trick, set aside our freedom but allows us to choose to enter into his great mercy.” Thus there is a difference between God’s will for universal salvation and what effectively will take place due to our freedom to say, “No.”

Secondly, when we translate these words of Jesus from the Scripture, we should avoid interpretation and stick as exactly to the text as we can.

Thirdly, neither the Greek, hyper pollon (in the Scripture), nor the Latin, pro multis (in the Latin Mass text), should be translated as “for all” but rather “for many.” This, in fact, is how the liturgies of East and West have always translated the Greek, that is, “for many.”

It is the author’s contention, consistently recognized by most theologians over the past 2,000 years, that this text in the Eucharistic Prayer is directed to the apostles and those who will hear the apostles and believe. It is not about the sufficiency of Jesus’ sacrifice, which everyone recognizes as being “for all,” but rather this particular text in the Mass is about the efficacy of that sacrifice for us, that is, for those who will actually benefit from this pouring out, and that, we hope, will be many.

Thus even in the heart of the Eucharistic Prayer, we are being invited to make a choice. We are being called to consume the body and blood of the Lord, which does not automatically bring us the fruit of Christ’s saving death and resurrection. We are being called to participate in this sacred meal, as St. Paul notes in his First Letter to the Corinthians (11:27-29): “Whoever, therefore, eats the bread or drinks the cup of the Lord in an unworthy manner will be guilty of profaning the body and blood of the Lord. Let a man examine himself, and so eat of the bread and drink of the cup. For anyone who eats and drinks without discerning the body eats and drinks judgment upon himself.”

Hauke concludes: “Certainly all men are invited to this covenant, but no one is constrained. For the acceptance of the covenant, the free decision of the faith operating in charity is necessary…. [T]he immediate addressees of the making of the covenant [at the Last Supper] are not all men in general, but rather the disciples who believe in Christ: the blood of the Lord is shed ‘for you’ (Lk 22:20) and ‘for many.’ (Mk 14:24; Mt 26:28) The covenant is offered in a certain way to all men, but accepted only by many. This relationship between offer of salvation and efficacy of salvation is seen for example in the Epistle to the Hebrews: ‘…so that by the grace of God he [Christ] might taste death for everyone. For it was fitting that he, for whom and by whom all things exist, in bringing many sons to glory, should make the pioneer of their salvation perfect through suffering.’” (Heb:9-10)