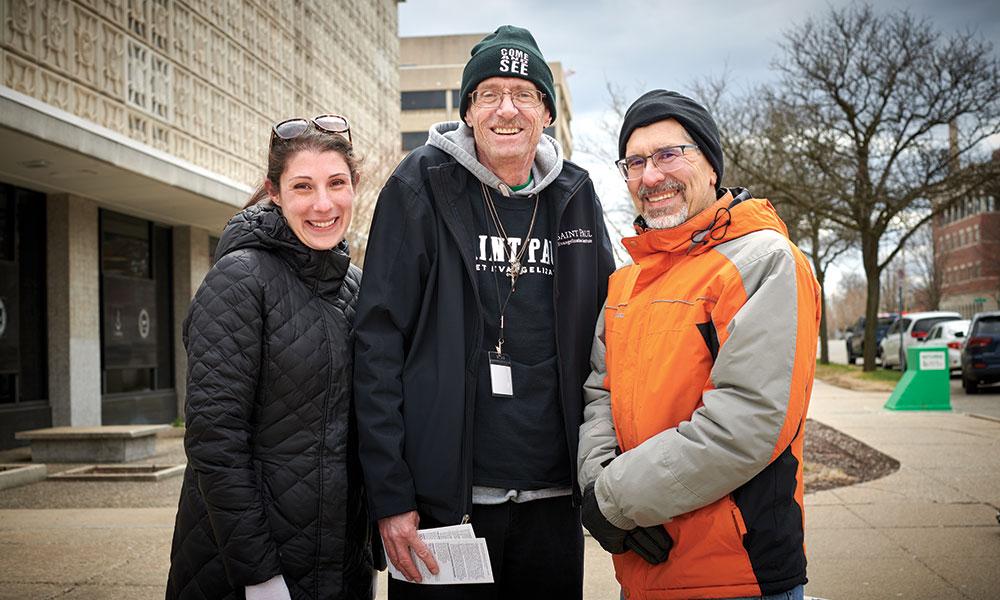 ‘What Amazes Me is God Still Wants to Use Me’

From the time he was young, Dave Weber was an extroverted, social child.

“I could go up to a stranger and start talking to them,” says Dave, now a biomedical engineer with McLaren Hospital in his hometown of Lansing.

It’s a trait that was noticed by a fellow parishioner at Immaculate Heart of Mary, Weber’s childhood parish and where he still attends Mass with his wife, Diana. His friend Michael McMurtray started encouraging Dave to use his gift for evangelization.

“St. Paul Street Evangelization (SPSE) came out with their first evangelization class,” Dave says. “Michael had been on me for a year and a half, and I felt God sort of prompting me – and I’d rejected it. You know you get those promptings? Michael started prompting me; he’d seen the type of person I was, not afraid to talk to people or approach them about the Gospel.”

His friend’s persistence finally moved Dave to prayer, and he decided to check out the weekly, three-hour class sessions near him. Soon into the year-long course, he knew “this was one of the main ministries God wanted me to do with my life.”

That was only a couple of years ago, and now Dave consistently joins the Lansing SPSE team in its frequent evangelization excursions around the region.

“We usually go out every couple weeks,” Dave says. “[Team leader Tom Valli] says, ‘Look, it’s time to go and evangelize,’ and we just go out and be together.”

“We’ve gone to Potter Park, we’ve gone to the Michigan State campus, but this year we’ve been pretty consistent in downtown East Lansing,” he says. “We’ve had a lot of success and conversations there.”

The team seeks to invite people into conversation with a friendly question: “What’s going on in your life? Do you have anything you want prayer for?” Sometimes, they offer a free miraculous medal, rosary or pamphlet about Catholicism. One of their signs reads, “If you need prayer, just ask.”

“A lot of times, it’ll be they lost a family member or a family member is sick, and that’s how we break into the conversation a little bit,” Dave says. “Sometimes, people will just come up on their own, curious, and you start talking to them, and it’s amazing. It’s about the relationship – you can’t just say, ‘Hey, this is the kerygma.’ You have to listen to them. Some people just want to tell their story, and you just sit and listen, and offer prayer.”

Only then, Dave says, might the conversation lead into Catholicism and what it means for him to be Catholic.

“You get a lot of rejection, and at first it sort of bothered me,” he says. “I’ve heard mocking and people laughing at me, but Jesus said you’ll be persecuted if you preach in my name. All you need is that one divine encounter, just plant that one divine seed, but you have to be open to that encounter. There’s more rejection than acceptance, but that doesn’t faze me. All you can do is try.”

Despite the frequent rejections, Dave is convinced people – especially the students he talks to in East Lansing – are actively searching for truth.

“I’m so amazed at how many young people are seeking God, but I get the sense they don’t know where to go or are too embarrassed to bring that up around their friends,” he says. “Especially with the pandemic, they’re seeking God.”

“When you do encounter a Catholic in the street, you ask them, ‘How’s your walk? Are you going to church?’ And you encourage them to go back to church, to seek the Eucharist.”

Dave remembers a powerful encounter at Lansing’s Potter Park Zoo – a woman in a wheelchair with her two adult daughters. He asked if there was anything she needed prayer for. “She said, ‘I have hospice coming in, and I’m about ready to die,’” he recalls. “So all four of us gathered together, and we offered prayer.

“St. Paul’s has emboldened me to be more open and cognizant to the Holy Spirit when he’s prompting me,” Dave adds, describing the impulse he feels when he believes God’s nudging him to speak to someone. “I feel a pressure, like when someone puts their hand on you and pushes you.”

He likewise feels a sense of awe that this is his calling.

“Just like everyone else in this world, I’m broken. I sin. What amazes me is God still wants to use me,” Dave says. “It’s made me come closer to God because I know in my heart he has purpose and meaning for me.”

“I’m so thankful I finally gave into God’s prompting to do this ministry, because it’s definitely borne fruit for myself and others,” he says. “It’s nothing I do whatsoever; it’s all what God’s doing through me.’

The mission of St. Paul Street Evangelization is to “train, equip and mobilize Catholics for the urgent work of evangelization.” For more information, visit streetevangelization.com.