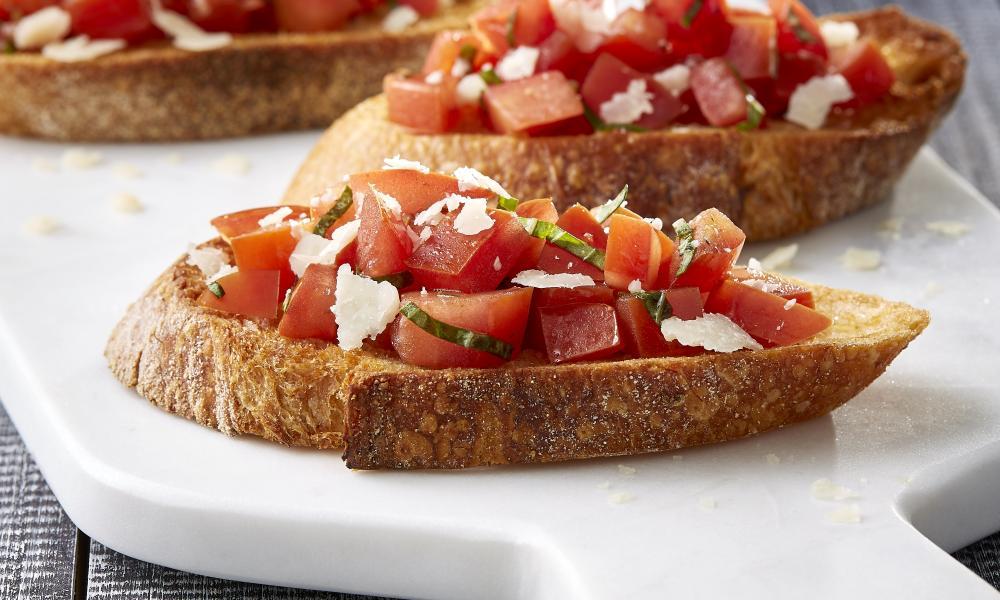 We Can’t Live on Bread Alone … but Try This Bruschetta

I love bread. All bread. I think I could live on it. Which is why in the book of Matthew (4:4) Christ reminds me – no, Michelle, one cannot live on bread alone. Which is good because there are times when I think I might otherwise try it.

I wonder if that is where bruschetta came from. Italians make amazing bread. And sure, one can’t live on bread alone, but slice it, toast it, adorn it with flavorful olive oil and various toppings and … perhaps now we have something we can live on? If you love bruschetta as I do, once again, you’d be tempted to try!

Of course, that’s not the point, as it is written in the Old Testament where Jesus refers us: It is not by bread alone that people live, but by all that comes forth from the mouth of the Lord. (Dt 8:3) The true meaning of the passage is clear. And it so perfectly ties in with the salvation we receive through the Eucharist, as Christ himself comes to us in the form of bread. He proclaims, “I am the bread of life … I am the living bread that came down from heaven; whoever eats this bread will live forever.” (Jn 6:48-51) If one cannot live on bread alone, but we can live on the bread of life, then clearly the bread of life is no ordinary bread!

Indeed, there lived an amazing Italian saint who understood this, literally. St. Catherine of Siena, a mystic and doctor of the Church, was said to have fasted for seven years on the Eucharist alone! Her confessor and biographer, Blessed Raymond of Capua, wrote:

For the seven-year period prior to her death, St. Catherine of Siena took no food into her body other than the Eucharist. Her fasting did not affect her energy, however. She maintained a very active life during those seven years. As a matter of fact, most of her great accomplishments occurred during that period. Her death had nothing to do with malnutrition, or anything connected with lack of food.

In fact, she received extraordinary strength upon receiving our Lord in the Eucharist!

Born in Siena, Italy, Catherine Benincasa was devoutly religious and knew she would devote the rest of her life to Christ at a very young age. She eventually joined the Third Order of St. Dominic.

Catherine became known early on for her contemplative life of holiness, and was greatly sought out as a spiritual director. From there, her public influence reached new heights. She was involved in brokering peace between city states, and was influential in bringing the papacy back to Rome.

Catherine was one of the most influential mystics of the 14th century. But it was her complete trust and love for Jesus in the Eucharist from which she ultimately drew her strength and divine inspiration.

St. Catherine was later recognized as a doctor of the Church for the spiritual and theological depth of her writings. Her feast day is celebrated April 29, which happens to be the same month dedicated to devotion to the Holy Eucharist. And of course, I can’t think of a better way to mark her day than with a Tuscan recipe that starts with … bread.

Drizzle slices of bread with olive oil and throw on a heated grill pan until desired doneness (toasting bread in the oven will work too). Rub garlic on each slice of toasted bread. Spoon tomato mixture on slices and top off with shaved parmesan.

Another Idea:
There are no limits to how you can prepare bruschetta! This Italian toast can be topped off with
anything from cannellini beans to prosciutto-wrapped melon!