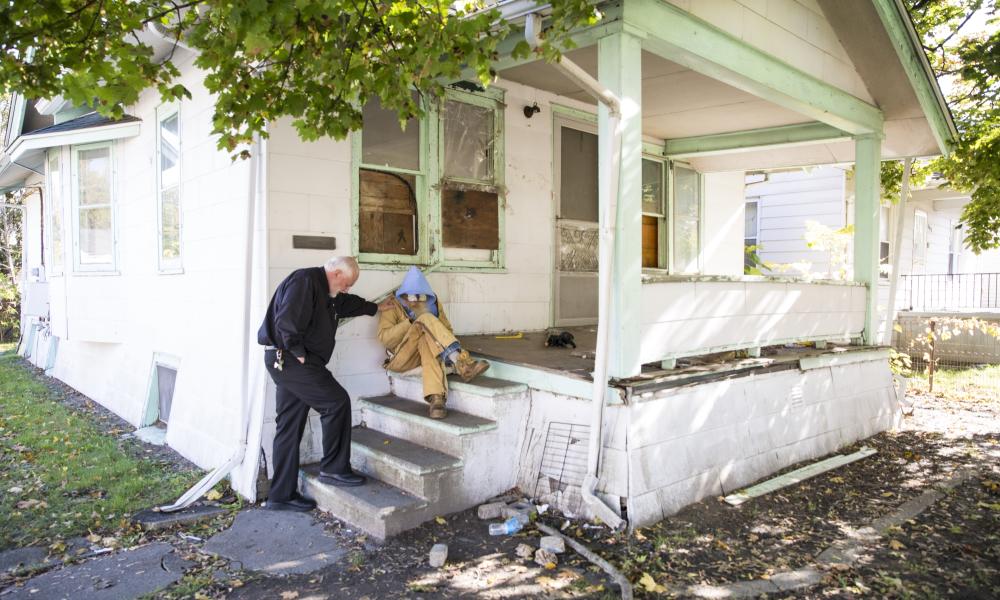 Walking the streets of one of America's poorest cities: What is a deacon from Chelsea doing in Flint?

Would you walk the streets of one of Flint’s most depressed neighborhoods?

Deacon Mike Martin is an imposing guy. He drives a big truck. He owned a heating and cooling business in the Ann Arbor area, and is a deacon at St. Mary parish in Chelsea. When Bishop Earl Boyea launched the FAITH in Flint initiative, Deacon Mike participated in a day for deacons and, through prayer, was reminded of a call he felt to serve the poor. He reached out to Father Firestone.

Father Firestone, the “pope of Flint,” is pastor of five of Flint’s Catholic churches, including St. Mary Church on the east side. Some say the east side is one of the most depressed parts of Flint. When Deacon Mike offered to help, Father Tom Firestone sent him there.

Deacon Mike is a doer. He took a map of the neighborhood and counted more than 100 homes that needed repairs. Tasks such as furnace or water heater repair were easy enough to do. These are things a doer could rally other doers to fix.

But Father Firestone said no. No? But, there was a great need?! Father Firestone agreed that the work is important. However, for decades, groups would come to Flint, fix something and leave. Then what? It goes back. If you want to help this neighborhood, don’t come in, fix something and leave. Rather get to know the people. Learn to love them. Introduce them to hope itself and show them who Jesus Christ is. First, go and walk the streets of Flint.

Deacon Mike is not allowed to walk alone. At least one other person must go. When you walk with Deacon Mike, you walk on crumbling sidewalks along streets with patches of newer, roughly laid asphalt, evidence of where water lines have been replaced. On some blocks, most of the houses are gone, half-burned or stripped of anything of value. A dog barks. Kids laugh and play. The sun shines through the trees as we walk up to a man sitting on his porch. Deacon Mike introduces himself and says he’s from St. Mary. He offers his card, writes his mobile phone number on it and tells the man, “If there is anything you need, call me.” Turns out, this man used to go to St. Mary, but doesn’t anymore. After more chatting, Deacon Mike asks if there is anything the gentleman wants him to pray for. A relative has cancer. We bow our heads and prayers are said. The fellow asks what time Mass is. Deacon Mike tells him 10 a.m. Sunday, then we move on.

Before that stop, we had a much more somber encounter a few streets over. We met Deacon Omar from Our Lady of Guadalupe parish. Deacon Omar was on the east side this evening because a young man in his early 20s died a few days ago from a drug overdose. He died alone in his home – a house with no power and no heat. In the side yard, tall grass was growing through car parts. On the oil-spattered driveway where the young man would repair cars, a makeshift shrine now stood. Photos of a handsome, smiling, gentle face were stapled to the garage door. There were candles, notes, teddy bears and cards honoring Our Lady. Deacon Omar led about a dozen people through the rosary in Spanish. Deacon Mike prayed along quietly in English.

On another of Deacon Mike’s walks, we visited Jerry. When you approach Jerry’s house, you can tell it is a center of activity. It’s hard to tell how old Jerry is – he’s led a hard life. You would like Jerry if you met him. He has a broad smile. He looks you in the eyes and is a great conversationalist. Perhaps had Jerry been born under different economic and societal circumstances, he might have taken his natural charm and entrepreneurial talent and lived a very different life. Instead, Jerry was a drug dealer.

Jerry had been in jail more than 30 times for drug-related crimes. But, no more. At least, we hope no more. He greets Deacon Mike with the familiarity of an old friend. Jerry hands Deacon Mike a piece of paper. With pride and relief, Jerry says he’s finally written his story of leaving behind his old life. He had found something more life-giving – a purpose. He had found Christ. Deacon Mike had been nurturing a friendship with Jerry, praying with him and visiting him. Newfound faith can be fragile. Yet, Jerry is passionate and bringing other men to Deacon Mike’s Tuesday Bible study.

Someone donated a van to St. Mary to make it easier for guys like those in the Bible study to travel across the city to participate in the job training program at St. Luke N.E.W. Life Center. One of the guys Jerry brought around is now in the program. Deacon Mike is also working with the job preparation class to teach them how to do home repairs, such as fixing a furnace or replacing a water heater.

There is a lady who lives down the street from Jerry. She greets Deacon Mike with a happy, yet weary, response. She is a mother and grandmother who carries many burdens. He asks about her furnace. She sighs, and says it still does not work. Deacon Mike says he’d like to fix it while it is still summer and asked her if it was OK if he has help from one of the guys in the neighborhood. He explains the St. Luke program. She is happy to help another person and get help for herself in the process. She is grateful.

Then Deacon Mike asks about her grandson. He has been showing up occasionally for Bible study and he has not once missed taking the van to St. Luke for the job training program. Deacon Mike tells her that the parish is going to have a community event and that he invited her grandson to cook. She got very excited and said she would like to help, too.

The community event is something Deacon Mike and the St. Mary Parish staff have been praying about and planning for some time. What did the community need? The form they decided upon was not just a festival, but a day of prayer and healing. Sure, they would have food and fun. But more important was the need for prayer and a healing service. So much healing was needed on the east side – mind, body and soul. On the day of the event, they ended up giving away more than 800 backpacks for children filled with school supplies. Many deacons, religious sisters and prayer teams were there to pray with people. They would have Mass. They didn’t know how many people would come – maybe 300? More than 1,000 people came.

God only knows what it will take to turn around a neighborhood like the east side. But on this day, a grandmother was there with her grandson cooking authentic Mexican food. Jerry and his friends were there. Guys from the work program were cooking, too. Several of these guys now have jobs. Many of the people Deacon Mike had met and helped were there. At least on this day, neighbors who once were afraid to come out of their homes were together. Lots of kids were laughing and playing.

Father Firestone was right. Rather than volunteers only coming in to fix things and leave, as good as this is, it is better when neighbors help neighbors. Young men were being trained to fix a neighbor’s furnace, to cook for others, to offer a ride, to pray for one another, to laugh with each other, to heal, to bring back hope. It’s just a beginning – a first step. Christ is present in the streets of Flint, and his footsteps sound a lot like Deacon Mike’s.

Pray: That with the guidance of the Holy Spirit, the mission in Flint will help to build up the kingdom of God; pray to know God’s will for your life.

Study: Read the lives of the saints and Scripture; for example, read Storm of Glory: The Story of St. Thérèse of Lisieux and the First Book of Samuel.

Engage: In learning about your charisms, in learning what it means to be an intentional disciple of Christ by checking out Called and Gifted; in learning more about Flint by coming for a visit.

Serve: Because you have prayed, and God has planted the desire to serve him on your heart.

To learn more about Faith in Flint, visit FAITHINFLINT.COM or contact Mary Dowsett at marydowsett@flintcatholic.org.