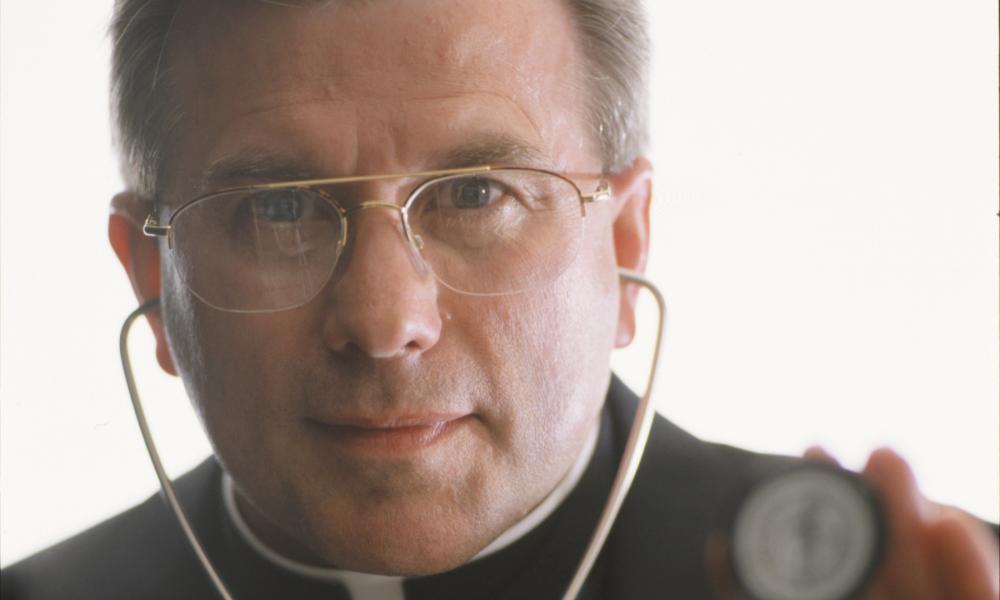 Vocations Part 2: Heart and Soul – Tim Nelson Gave Up a Career as a Cardiologist to Become a Priest

Who Are You Called to Be? Your Vocation is a Gift From God to Us All.

Around six years old I remember seeing a priest on the altar and thinking, “Gee, he gets to be with God all day long!” That thought got the ball rolling. I felt sure I wanted to be a priest until I got to college and started dating seriously.

I was majoring in math and physics and wanted to do something really important with my life – like work for NASA. Whenever I thought about he priesthood, I just couldn`t get a clear mental picture of what a priest does all day long.

To help resolve the vocational impasse, I decided to take a year off and teach math to high-school students in Bolivia. There I met a medical missionary and became fascinated with the idea of becoming a doctor. I could easily see and understand how a doctor can profoundly help people`s lives. So I returned to the United States with little thought of the priesthood.

I graduated with an M.D. in 1979 and set up a cardiology practice in Grand Rapids. I became engaged. Eventually [however] a variety of issues made it clear we were not meant to get married. As time went on I realized I could live a happy and fulfilled life as a celibate.

As a cardiologist, I felt immensely privileged to care for the bodies of my patients. I also became much more aware of the spiritual depth of people`s lives and the soul`s integration with the body. I finally came to understand what a priest ‘does.’ A priest brings Christ to people – and brings people to Christ. That distant idea of becoming a priest started to return and now didn`t seem so crazy after all.

Finally, after 12 years of cardiology practice, I ‘hung up’ my stethoscope and entered Sacred Heart Seminary. I was ordained by Bishop Carl F. Mengeling on June 10, 2000. Later, I mentioned to the bishop that I was interested in Hispanic ministry. When the pastor at Our Lady of Guadalupe Parish told me he was retiring soon, but didn`t know who would take his place, I said, ‘I will!’ About a year later, Bishop Mengeling offered me the job.

The Hispanic culture emphasizes strong family ties, and those ties extend to the parish priest. I feel as though I have been welcomed into a large, extended family. The priest holds a very important and meaningful responsibility as ‘Father’ in the religious family of the parish. The peoples` love respect and support for me as a priest has been overwhelming.

Vocation: More Than a Career – It’s a Way of Life

From the start, this needs to be said – discovering one’s calling, one’s vocation, is very different from finding a career. We may choose our careers, but when it comes to a vocation, our feeling is, “It chose me more than I chose it.” When we’re discerning a vocation in the church, the body of Christ, we know, in faith, that ‘it’ is actually a person, Christ Himself.

But John the Baptist pointed to Jesus passing by and said to two of his followers, “Look! There is the Lamb of God.”  The two followed Jesus. Jesus noticed them following him and asked them,  “What are you looking for?” They said to him, “Rabbi, where do you stay?” “Come and see,” he answered. (cf John 1: 35 ff)

Becoming a disciple of Jesus means being with him where he lives, seeing how he lives, eventually joining him in his life and work of redeeming. “If you wish to come after me, take up your cross daily and follow me ... I will make you fishers of men,” he tells them.

A Call to Sacramental Ministry – The Priesthood

In the mystical body of Jesus, all the faithful are made a holy and kingly priesthood – offering spiritual sacrifices to God through Christ. Therefore, there is no such thing as a member who does not share in the mission of the whole body. (Presbyterorum Ordinis 2) However, even as the members of a physical body have different functions – the heart does not do the work of the hands, for example – so too do the members of the mystical body of Jesus Christ, the Church.

Jesus appointed some to exercise the priestly office publicly in his name. (PO 2) Thus, he sent the apostles, as he himself had been sent by the Father. Their successors, the bishops, are sharers in Christ’s consecration and mission.

The function of the bishops’ ministry was shared with prebyteroi, or priests, that they might be co-workers with the episcopal (relating to the bishop) office. Priesthood is conferred by its own specific sacrament, holy orders.

Priests are called particularly to be ministers of the Word of God. They share that Word by their exemplary behavior, their preaching and teaching, and treating contemporary problems in the light of Christ’s teaching. (PO 4) Their role is to issue a pressing invitation to conversion and holiness.

Priests are also called in a special way to be ministers of the Eucharist and other sacraments. Priests share Christ’s priesthood and, by carrying out sacred functions, act as his ministers who exercise his priestly function for our benefit in the liturgy. (PO 5) By baptism, priests introduce us into the people of God. By penance, they help us reconcile with God and the Church. By anointing of the sick, they relieve those of us who are ill. In the celebration of the Eucharist, especially, they offer Christ’s sacrifice sacramentally.

Their leadership role is pastoral. In the name of the bishop, they gather the family of God and lead it – in Christ and through the Spirit – to God the Father.

For the exercise of their ministries, a spiritual power is given to priests – a power whose purpose it is to build up. (PO 6) And in the building up of the Church, priests are exhorted to “treat everybody with the greatest kindness after the model of our Lord.” (PO 6)