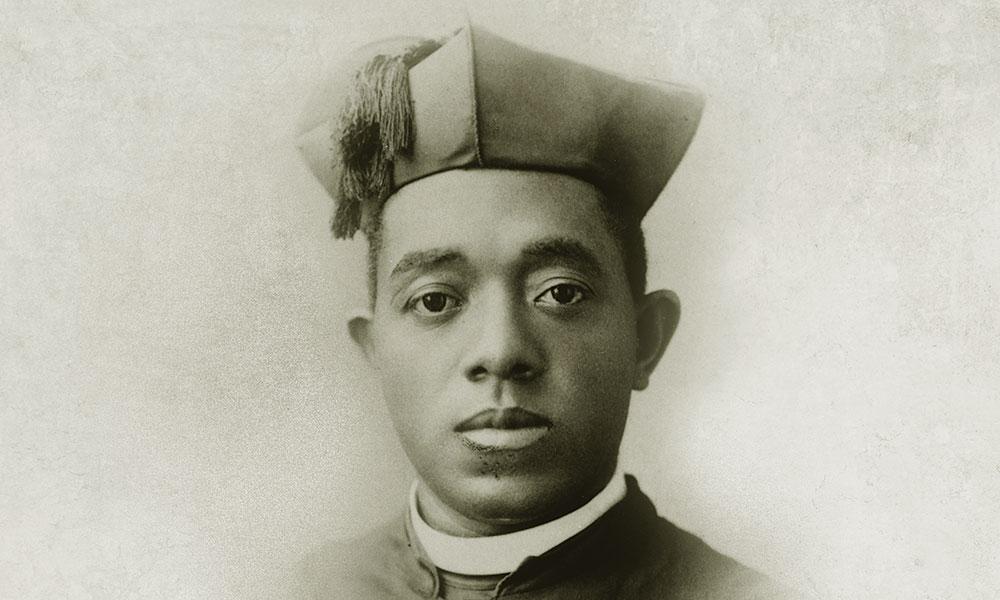 Father Augustus Tolton was the first black priest in the United States. Born in 1854 in Missouri, he was a former slave who was baptized as an infant and raised Catholic.

After studying at the Pontifical Urban University in Rome, Father Tolton was ordained to the holy priesthood in the Basilica of St. John Lateran upon the Easter Vigil of 1886. He offered his first public Mass a day later in St. Peter’s Basilica.

Upon returning to the United States, Father Tolton was assigned to the Diocese of Alton in Illinois, and first ministered to his home parish in the City of Quincy.

Eventually he was sent to Chicago, where he was charged with establishing St. Monica’s Church on the city’s South Side as a “national parish” for black Catholics.

Father Tolton’s success at ministering to black Catholics quickly earned him national attention within the Catholic hierarchy. “Good Father Gus,” as he was called by many, was known for his “eloquent sermons, his beautiful singing voice, and his talent for playing the accordion.”

On July 9, 1897, Father Tolton died in hospital after having collapsed the day previous due to the summer heat wave in Chicago. He was 43 years old.

Father Tolton’s cause of canonization was initiated in 2010 by Archbishop Francis Cardinal George of Chicago. In 2019, Pope Francis granted Father Tolton the title of “Venerable.”

PRAYER FOR THE CANONIZATION OF VENERABLE FATHER AUGUSTUS TOLTON

(For private use only)

O God, we give you thanks for your servant and priest, Father Augustus Tolton, who labored among us in times of contradiction, times that were both beautiful and paradoxical. His ministry helped lay the foundation for a truly Catholic gathering in faith in our time. We stand in the shadow of his ministry. May his life continue to inspire us and imbue us with that confidence and hope that will forge a new evangelization for the Church we love.

Father in Heaven, Father Tolton’s suffering service sheds light upon our sorrows; we see them through the prism of your Son’s passion and death. If it be your Will, O God, glorify your servant, Father Tolton, by granting the favor I now request through his intercession (mention your request) so that all may know the goodness of this priest whose memory looms large in the Church he loved.

Complete what you have begun in us that we might work for the fulfillment of your kingdom. Not to us the glory, but glory to you O God, through Jesus Christ, your Son and our Lord; Father, Son and Holy Spirit, you are our God, living and reigning forever and ever.