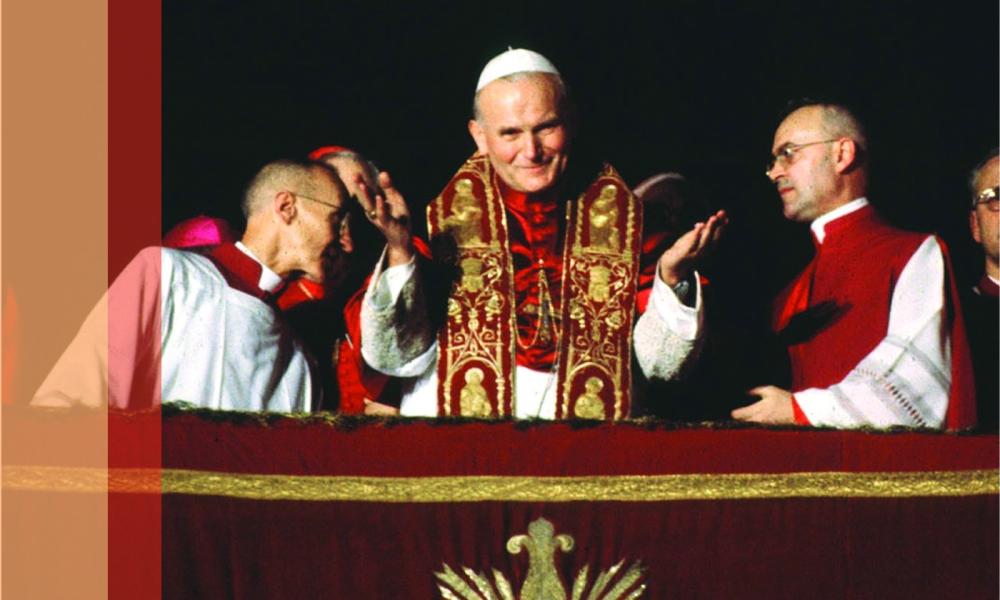 When Karol Wojtyla stepped out onto the balcony overlooking St. Peter’s square after his election on Oct. 16, 1978, he was introduced to the world as Pope John Paul II. The selection of his name was partly to honor his immediate predecessor, John Paul I, who died after a brief 33-day reign, but more significantly to represent the new pontiff’s mission: to explain, defend and fulfill the teachings of the Second Vatican Council, which was convened under Pope John XXIII and Pope Paul VI.

A rare and important event: The Second Vatican Council was only the 21st ecumenical council in the 2,000-year history of the Catholic Church. An ecumenical council is a gathering of all the bishops of the world – ‘ecumenical,’ meaning universal – which, when summoned by the bishop of Rome, constitutes the highest teaching authority in the Church. Councils have been convened throughout the ages at crucial moments in Church history: to refute heresy, resolve crises, discuss matters of doctrine and issue formal pronouncements about matters of faith and morals. Most of the councils were called in response to some error or false teaching, and resulted in the definition of doctrine, such as the Trinity, the Incarnation, Mary as the Mother of God, etc. Vatican II is unique in that it was called primarily to be a pastoral council, rather than a response to a crisis.

Jesus endowed His Church with the Holy Spirit: He wanted to ensure the handing on of the faith. This is done through the teaching authority of the Church called the Magisterium. When the bishops are united in communion with the bishop of Rome in an ecumenical council, they enjoy infallibility in their pronouncements on faith and morals. A council does not produce innovations in doctrine or the faith. Rather, it makes more explicit those existing matters of the deposit of faith in continuity with the Tradition of the Church.

Why was the council held? The Second Vatican Council was of a pastoral nature, rather than one called to condemn errors. Pope John XXIII, who convened the council, desired it to increase the “fervor and energy of Catholics and serve the needs of Christian people.” He hoped the council would communicate and promote the universal call to holiness attainable by every person, and instill a missionary spirit in the hearts of all Christians. To do this, the Church needed to better instruct the faithful of all ages in faith and morals, to proclaim the boundless depths of God’s mercy, and to engage Christians in the modern world. Pope John expressed his desires for up-to-date renewal of the Church in one word – aggiornamento. When asked to explain his prayers and hopes for the council, he simply went to a window and threw it open, letting the fresh breeze wafting into the room express his intentions in a single gesture.

How did the Church prepare? The Church, in the three years preceding the council, embarked on an intense time of prayer, reflection and preparation. Bishops around the world submitted proposals for subjects to be discussed; more than 2,000 lists of proposals were submitted with detailed opinions from theologians. In June 1960, the Holy Father established 10 commissions to study particular questions, including Scripture, Tradition, faith and morals, bishops and the control of dioceses, religious orders, the Liturgy, seminaries and ecclesiastical studies, missions, the Eastern Churches and the lay apostolate.

What was Pope John XXIII’s opening message? The council opened on Oct. 11, 1962, with a solemn Mass in St. Peter’s Basilica, with more than 2,500 bishops present – the greatest gathering at any council in the history of the Church. After the Mass, Pope John addressed the council Fathers, communicating to them the direction and spirit of the council. Pope John emphasized that the Church must proclaim God’s mercy and understanding, and pour out the riches the Church had received from Christ upon all people who place all their trust in God. The task of the council was to find ways that the Church could present itself to the world of today, and reach the minds and hearts of all.

The single best way to really grasp the teachings of the Second Vatican Council is to read the documents. Visit your local Catholic  bookstore for a comprehensive volume of conciliar and post-conciliar documents, or log onto the Vatican’s Web site: www.vatican.va/archive/

2 labels that were used to describe council Fathers:

reactionaries: who wanted the Church to remain as it was

On the Church (Lumen Gentium)

The Church in the Modern World (Gaudium et Spes)

The documents showed the world how the Church was adapting to modern times while holding fast to the treasures of its 2,000-year history.

History of the 21 councils

Affirmed the divinity of Christ

Fixed the date of Easter

Dogma of the Most Holy Trinity

Declared the Holy Spirit to be consubstantial (of the same substance, therefore divine) with the Father and the Son

Nicene Creed finished and promulgated (“I believe in the Holy Spirit ... life everlasting” added to the end)

Affirmed that Jesus is one person with two natures: human and divine

Defined that Christ had two wills, human and divine

Affirmed that because the Word became flesh, holy images and statues are legitimate and worthy of veneration

Deposed Photius, the unlawful Patriarch of Constantinople and restored the patriarchy to Ignatius, beginning the schism between the Eastern and Western Churches

Regulated Papal Elections: To elect a pope, the college of cardinals must vote with a two-thirds majority

Defined transubstantiation: Holy Eucharist is the Body, Blood, Soul and Divinity of Christ under the accidents of bread and wine

Planned crusade to the Holy Land

Mandated that unleavened bread be used for the Eucharist

Decreed that ecumenical councils have authority over the Church

Reasserted: soul is form of body

Clarified the relation of the pope to an ecumenical council

Affirmed Scripture and Tradition as the full deposit of faith

Defined the theology of the sacraments as a matter of faith

Established seminary system to train men for the priesthood

Allowed for native language to be used during liturgy

Affirmed the role of the laity

Veni Creator Spiritus dates back to the ninth century. It has been solemnly chanted at the beginning of every new year, every new century, every ecumenical council, every conclave and many of the most solemn events of the Church since that time.

Come Creator Spirit visit the minds of those who are yours; fill with heavenly grace the hearts you have created.

You who are called the Paraclete, gift of God’s most high living fountain, fire, love and spiritual anointing for the soul.

You are sevenfold in your gifts the finger of God’s right hand, you, the Father’s solemn promise giving words to our lips.

Kindle a light in our senses pour love into our hearts, infirmities of this body of ours overcoming with strength secure

The enemy drive from us away, give us peace without delay, with you as guide to lead the way we avoid all cause of harm.

Grant we may know the Father through You, and come to know the Son as well, and may we always cling in faith to you, the spirit of them both. Amen.