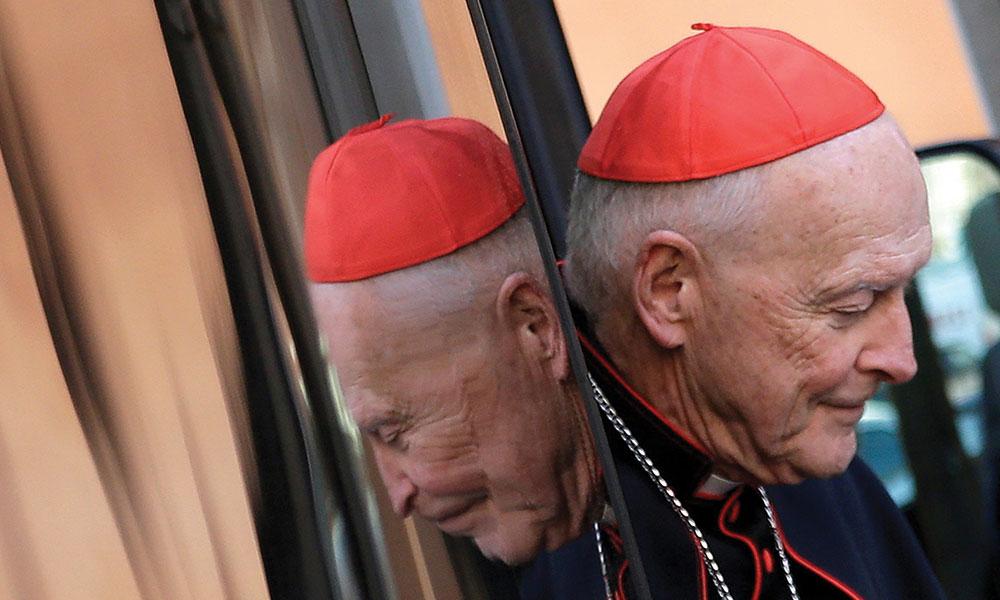 The report from the Vatican

A sobering report from the Vatican about the sexual misdeeds of former Washington, D.C., cardinal Theodore E. McCarrick are painful reminders of the work the Church must do to rebuild trust and offer healing to victim-survivors, Catholic leaders in the U.S. and in Rome said.

“This is another tragic chapter in the Church’s long struggle to confront the crimes of sexual abuse by clergy,” Los Angeles Archbishop Jose H. Gomez, president of the U.S. Conference of Catholic Bishops (USCCB), said in a Nov. 10 statement, shortly after the report’s release. “To McCarrick’s victims and their families, and to every victim-survivor of sexual abuse by the clergy, I express my profound sorrow and deepest apologies.”

The report, which is based on the Vatican’s two-year-long investigation and spans hundreds of pages, details how McCarrick was able to ascend through the Church’s hierarchy to become one of the most powerful prelates in the U.S., despite repeated — yet then unproven — allegations of sexual improprieties dating back decades, some involving seminarians and young men.

According to the Vatican’s findings, whispers and rumors that McCarrick had shared a bed with seminarians had been circulating since McCarrick’s time as bishop of Metuchen, N.J., in the 1980s. In spite of this, no formal investigations were launched, and the rumors were ultimately dismissed by Church officials — including St. John Paul II, who believed McCarrick’s strong denials and promoted him to become archbishop of Newark, N.J., and Washington and later to the College of Cardinals.

McCarrick’s personal ties and reputation as an intellectual and pastoral leader in U.S. Church circles led to his rise, the report said, until an investigation by the Archdiocese of New York — where McCarrick had served as an auxiliary bishop from 1977-81 — found credible an allegation that he had sexually abused a teenager decades earlier.

McCarrick resigned from the College of Cardinals in July 2018, and, after a subsequent Vatican investigation, Pope Francis defrocked him in February 2019.

What was the Vatican response?

The Vatican’s report suggested — though it offered no direct evidence — that St. John Paul II’s decision to believe McCarrick was partially based on the pope’s “past experience in Poland regarding the use of spurious allegations against bishops to degrade the standing of the Church.”

Subsequent popes, including Benedict XVI and Francis, the report said, also believed McCarrick’s denials because, at the time, “no credible information emerged suggesting that he had engaged in any misconduct.” The report added several U.S. bishops — while not naming them — provided “inaccurate and incomplete information to the Holy See” about McCarrick’s alleged sexual conduct.

The response of the USCCB

That McCarrick was able to go so long — and that he was considered for promotions despite rumors of his misconduct — without facing justice for his crimes is a wake-up call for the Church’s leaders, Archbishop Gomez said.

“This report underscores the need for us to repent and grow in our commitment to serve the people of God,” Archbishop Gomez said.

“Please know that my brother bishops and I are committed to doing whatever is in our power to help (victims) move forward and to ensure that no one suffers what (they) have been forced to suffer,” he added.

Archbishop Allen H. Vigneron of Detroit, vice president of the USCCB since November 2019, said the Church — and particularly its leaders — must demonstrate a clear commitment to transparency and vigilance, starting with reaffirming “our commitment to the care and healing of victim-survivors and to continue the renewal of our efforts to protect children and vulnerable adults.

“While the document is profoundly difficult to confront, I am encouraged by the Vatican’s commitment to produce and publicly release the information with which we must grapple if we are to continue the path of reconciliation, reform, and healing in our Church,” he said. “There is also a valuable lesson for all Church leaders on our responsibility to ensure this is never allowed to happen again.”

In the wake of Pope Francis’ 2019 motu proprio, Vos Estis Lux Mundi, which outlined protocols for bishops’ accountability worldwide, the U.S. Bishops unveiled in March a new Catholic Bishop Abuse Reporting System to receive and relay to civil and canonical authorities any allegations of abuse against bishops — a step that was clearly missed in McCarrick’s case.

In a statement accompanying the release of the McCarrick report, Vatican Secretary of State Cardinal Pietro Parolin expressed “sorrow for the wounds that these events have caused to the victims, their families, the Church in the United States, and the Universal Church.”

Cardinal Parolin said victims’ testimonies were “fundamental” in producing a thorough report, adding that over the past two years, “we have taken significant steps forward to ensure greater attention to the protection of minors and more effective interventions to avoid that certain decisions made in the past be repeated.”

In the Archdiocese of New York, where the initial allegation that launched the canonical investigation into McCarrick was made, Cardinal Timothy Dolan thanked Pope Francis for following through on his pledge to produce and publish a complete study — however painful — of the events that led to McCarrick’s evasion of Church scrutiny.

“The trust that our Holy Father displayed in the process followed by this archdiocese — and in similar processes followed by all other dioceses in the United States — was very affirming, and will lead, I hope, to others having the confidence to come forward, knowing that their allegations will be handled seriously, sensitively and appropriately,” Cardinal Dolan said.

Across the country, bishops and Catholic leaders expressed their sorrow and resolve to repent of the sins of the past, citing the McCarrick report as a painful, but necessary first step.

“The victims of abuse, the Church and its members, along with the rest of society and future generations, all suffer from clergy sexual abuse, misconduct and scandals,” said Archbishop Jerome Listecki of Milwaukee. “Not bringing these crimes into the light only deepens the wound and does not allow the Church a process of exposing the wrongdoing and sin.”

In the Archdiocese of Newark, Cardinal Joseph R. Tobin, C.Ss.R., said he was continuing to study the 400-plus-page report, which he said “represents a significant and powerful step forward in advancing accountability and transparency regarding sexual abuse.”

“The Archdiocese of Newark hopes that the report will provide insights that will help us to strengthen further our well-established programs aimed at protecting the faithful,” Cardinal Tobin said. “We remain united in our sympathy and support for all victims of sexual abuse and pray for healing and reconciliation within our Church.”

Please believe in the possibility for hope and help and healing. We encourage you to come forward and speak out.

If I have been the victim of child sexual abuse by someone representing the Catholic Church, whom should I contact?

Contact the Victim Assistance Coordinator for the Diocese of Lansing, Cheryl Williams-Hecksel, LMSW, 888.308.6252 or cwilliamshecksel@dioceseoflansing.org.