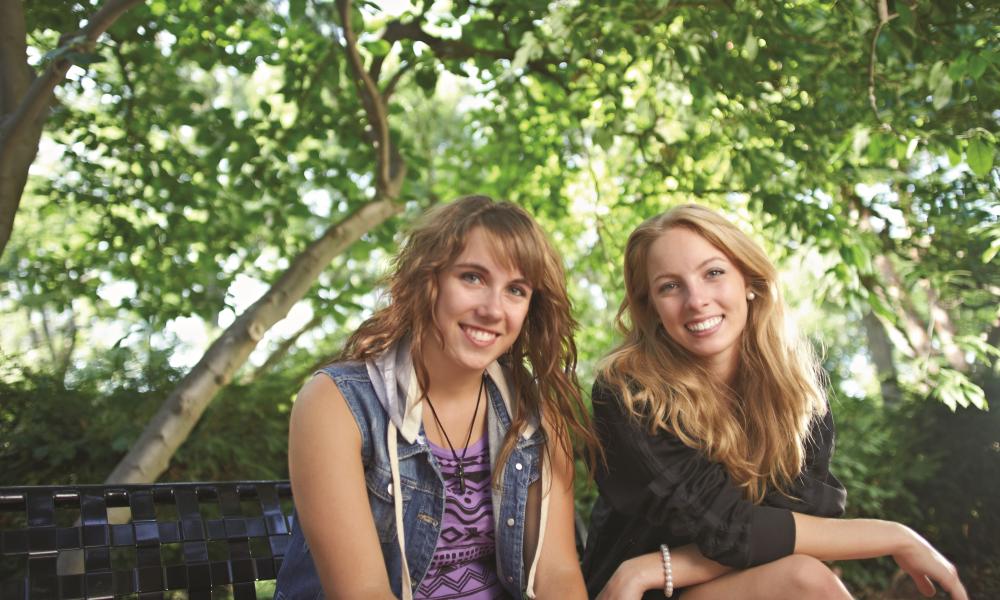 Twins in life - twins in faith

When Kate and Nicole Baumer sit next to each other, you might not guess that they are sisters. That is, until they start talking. They finish each other’s sentences, help each other find just the right word and gently tease each other.

In fact, the Baumer girls are more than sisters. They’re twins. But they couldn’t be more different.

“The only things we have in common are our parents, our faith and our voice,” says Kate.

On the surface, the girls are as different as night and day. One has dark hair, one light, and their styles differ greatly.  As different as they are, they agree that their faith is central to their lives.

St. Gerard parishioners, Kate and Nicole, 17, participated in youth group there and were encouraged to attend the Diocesan Youth Leadership Camp (DYLC) by their leader. Kate attended during the summer of 2009; Nicole, the next year.

Nicole’s interest in playing in a summer lacrosse league kept her from attending with her sister, but she says that maybe that was for the best.

“We went at different times, but we were fine with that,” Nicole says. “We may butt heads a lot, but it’s different when it comes to faith.”

Quick to agree, Kate adds: “It’s the one place (youth group) that we both love going to.”

In 2012, both girls attended DYLC as leaders. And they loved it.

“Faith isn’t about being perfect. It’s about the journey. I’m not perfect, I’m under construction. I feel like that’s what is great about the Catholic Church,” Nicole says.

Throughout their high-school years, both girls were active in the youth group at St. Gerard.

“Youth group has prepared me for what’s to come,” Kate says. “I know that I’ll be involved in my student parish, I’ll keep doing what I’m doing and God will help me get there.”

Gathering momentum during youth group pushed her to step up and volunteer in the parish, Nicole says.

“After DYLC, I realized that I had to stay involved in youth group and in my parish. I became a Eucharistic minister,” Nicole says. “That was a small way that I could contribute and I carry that with me to any parish. It’s a humbling thing to do.”

For Kate, the message was loud and clear.

“Over time, I realized that I could do this – youth ministering, song-writing, music – for a living. And, thanks to my gifts. I feel called to it. I am a God-person,” Kate says.

If their youth group experiences kept them involved, it was the Youth Jamboree that lit their hearts on fire.

“Jamboree is a huge event – there are so many kids – I remember thinking these kids are normal, just like me. The music, keynotes, workshops … the combination, all of it just felt so right,” Kate says.

Nicole says she appreciated the opportunity for their mother, Laurie, to chaperone the event.

“I was so glad that she got to see all these kids fired up about their faith, just like me. I wish that other adults could see it. We know what it’s like to be on fire for our faith,” Nicole says.

“It was awesome, and that’s an understatement,” Kate says.

It’s one thing to be involved in youth group and fired up during events, but what about every day?

She says she tries to live a quiet evangelization – “live your life the way God would want you to live it. Be an example of faith.”

Nicole says that, throughout high school, both girls have found friends who share their interests – not just in faith.

“We’re not just those Catholic girls. We are the skier, the lacrosse player, the flutist, the songwriter …” she says.

Kate put those thoughts into action during Jamboree, when she presented a workshop called SWAAG: Speak with Actions About God.

“It was tough, because there wasn’t a teen-led workshop before,” Kate says. “I am working with youth ministers to do a similar presentation at various youth groups in the area.”

Both girls are very clear about one thing: The only reason they went to youth group to begin with was because they were invited by friends.

“A friend asked me to go,” Nicole says. “I never would have gone … we wouldn’t have gone without the personal invitation.”

Kate agrees and says it was the community that drew her for her second and third visits to youth group.

So, what’s next? The girls have fond memories of their youth group, and between them nearly a dozen mission trips.

“It will be hard to leave our group. We have friends and security there,” Nicole says.

Nicole and Kate graduated from Grand Ledge High School in June and are both attending Michigan State University. And, before you can even ask: “No, we’re not living together!” they say.

Nicole plans to study pre-medical and become an obstetrician or pediatrician. Kate says she’d like to become a youth minister, so she’s chosen general arts and letters for now.

“It’s hard to make plans. We had a friend group that we shared and felt secure with, but I know that we’ll figure it out,” Nicole says.

Kate acknowledges that it “will be hard to start again, initially. It’s always hard to begin again.”

It’s not just the Baumer girls who are adjusting to new surroundings this fall. Their parents, John and Laurie, acknowledge that their house will be much quieter.

“I’m not even thinking about it yet,” Laurie said this summer. Her pride in her girls’ accomplishments and faithfulness is evident.

“It’s the kind of thing that every parent wishes for their kids,” she says. “We just wanted to show the girls that faith is about family, and now, we’re inspired by them, watching them live their faith.”

During the interview, Laurie shared with the girls that they significantly impacted their father, John’s, decision to convert to Catholicism.

“When you see your kids grow in their faith and live it, and live it in front of other people … it’s just inspiring,” Laurie says.