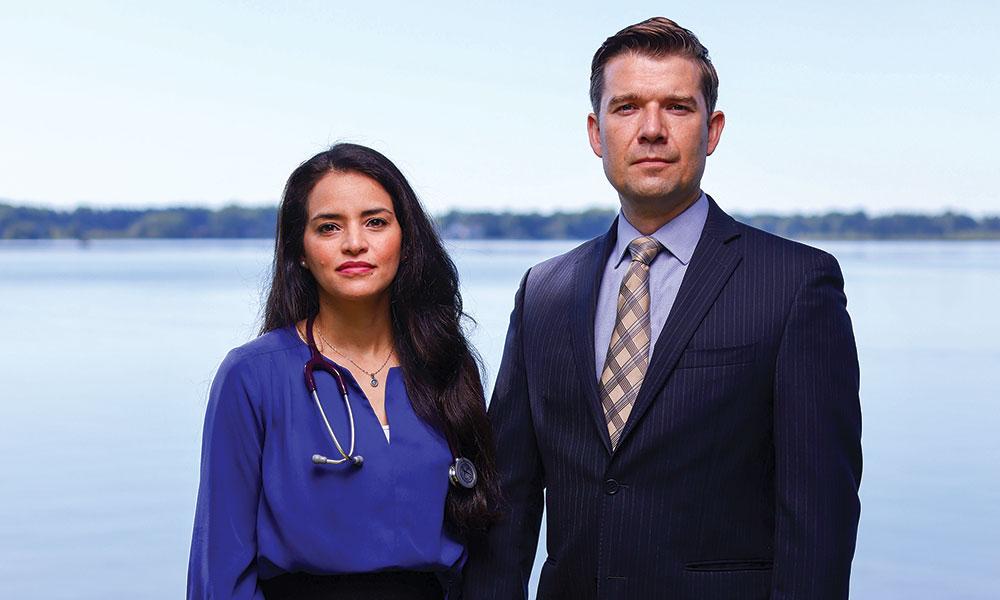 Truth Will Make Us Free

She’s a doctor. He’s a lawyer. Meet Dr. Joanne Castillo and Daniel Hilker, married parishioners at St. Mary in Williamston. FAITH Magazine asked Joanne and Daniel to assess the claims being made by the pro-abortion lobby in the current debate over the proposed “Right to Reproductive Freedom” amendment to the constitution of Michigan. Here’s their take:

The proposed “Right to Reproductive Freedom” amendment to Michigan’s constitution is a wolf in sheep’s clothing. The proposal was circulated and sponsored by Planned Parenthood, and it threatens to change Michigan’s constitution to make abortion legal until birth and allow for abortions and sterilizations for minors without parental consent. The proposal would affect over 25 laws that are already in place to protect women, protect unborn children, and prevent taxpayer-funded abortions.

You may have heard some of the claimed benefits of the amendment: “Protect miscarriage care!” “Protect women!” “Don’t take away the right to choose!” “My body, my choice!” “Save Roe!”

If you read nothing else in this article, know that the amendment does not restore the Roe status quo, rather it unwinds nearly all of Michigan’s Roe- and Casey-compliant abortion regulations and leaves Michigan’s legislators virtually powerless to regulate abortion, sterilization and gender transition therapy. Under Roe and Casey, Michigan’s laws required parental consent for minors, required safe care, and limited elective abortion to “pre-viability.” The amendment changes all this and more.

Elective abortion always harms women. Elective abortion is always an act of violence against the most vulnerable. It always ends the life of a child, a human being that is unrepeatable, created in the image and likeness of God, body and soul from the moment of conception, with a unique genomic sequence, personality, and God-given mission. This “hardline” Catholic perspective is not the subject of this article, instead let’s turn to the claims made by the amendment proponents:

This amendment is so far beyond Roe that it cannot fully be explained in one sitting. Take this direct quote for example:

[T]he state may regulate the provision of abortion care after fetal viability, provided that in no circumstance shall the state prohibit an abortion that, in the professional judgment of an attending health care professional, is medically indicated to protect the life or physical or mental health of the pregnant individual.

The text of the amendment is not a loophole. Court interpretation of Michigan’s constitution starts and ends with the text itself. Unless the amendment is defeated, abortion will be legal in Michigan up to birth under the “physical or mental health” exception. As any woman knows, a normal, healthy delivery is a risk to the mother’s “physical health.” Obstetric emergencies, like severe bleeding and amniotic fluid embolism, can even cause death during delivery. If a determination is made that an abortion will protect a mother from this danger to her physical health, then the abortion is permissible. Also, since “health care professional” includes a wide variety of professions, the “mental health” or “physical health” determination could be made by a nurse or a social worker, among others. Nothing in the text indicates that the same “health care professional” who makes the determination must be the one who performs the abortion. Therefore, a referral network of psychologists or social workers to abortion physicians could further insulate providers from laws against post-viability abortion. The plain text here says that abortion will be legal until birth in Michigan. This is not a return to Roe.

2. The amendment preserves the rights of the next generation.

Parents are essential to the formation of their minor children. It is necessary that children be counseled by their parents regarding life-altering medical decisions. This counseling is a right for both parents and children. However, the amendment clearly provides that a minor girl can seek and obtain an abortion without parental knowledge or consent. The amendment further provides that a minor boy or girl can seek and obtain permanent sterilization or hormone therapy without parental knowledge or consent. According to the amendment:

Every individual has a fundamental right to reproductive freedom, which entails the right to make and effectuate decisions about all matters relating to pregnancy, including but not limited to prenatal care, childbirth, postpartum care, contraception, sterilization, abortion care, miscarriage management, and infertility care … The state shall not discriminate in the protection or enforcement of this fundamental right.

This means no discrimination on the basis of age. This “care” could include secret counseling in favor of abortion. “Care” could include secret treatment of gender-confused children that results in hormonal sterilization. Such treatment is likely to have permanent harmful effects, especially in prepubertal minors. The amendment is a direct attack on the rights of Michigan parents and children.

3. The amendment protects a woman’s right to choose.

Medical professionals have the duty to provide detailed information of risks versus benefits to patients in order for them to make an informed decision regarding medical and/or surgical treatments. Providing this information allows for “informed consent.” However, the amendment reduces the consent threshold from “informed” to “voluntary.” “Voluntary consent” merely means that there is no coercion or deceit on the part of the practitioner. A woman cannot freely choose an abortion until she is informed. She should be informed of the fundamental risks associated with abortion and that certain risks are higher during an abortion procedure than during childbirth. Further, the amendment would not allow patients to sue in malpractice against a physician who failed to inform them of the significant health risks posed by an abortion or sterilization procedure. The physician has a clear defense under the text of the amendment. The amendment protects physicians, not a woman’s right to make informed choices.

A patient would never be punished for having an involuntary miscarriage or a stillbirth, even under Michigan’s 1931 law that is currently in litigation. Miscarriage and stillbirth are medical situations in which the unborn child dies spontaneously. Miscarriage refers to a death before 20 weeks and stillbirth occurs at 20 weeks or more of gestation. The term stillbirth also refers to fetal death during birth. Women will always be able to receive medical care for a miscarriage or stillbirth under current law, as the mother did not intend to end the life of the child in the womb. The amendment does nothing to protect “miscarriage care;” it merely hides abortion care under this false mantle.

5. The amendment allows medical treatment for an ectopic pregnancy.

No law, not even the 1931 statute that is currently in dispute in the courts, prevents doctors from providing these services. The 1931 law makes elective abortions illegal, and a doctor who performs an elective abortion would be guilty of a crime and could be threatened with prison. Current Michigan law allows care for spontaneous miscarriage, fertility or pregnancy services.

7. The amendment prevents prosecution of doctors for performing abortions where the mother’s life is at risk.

This protection is already enshrined in Michigan’s laws. The protection appears in multiple statutes, even the 1931 law. The amendment text goes far beyond Roe-era statutes. It provides that no “health care professional” can have an “adverse action” taken against them for “aiding or assisting” in the exercise of “reproductive freedom.” This is a radical increase in protection from regulation, since the amendment states that no pre-viability law can “infringe on that individual’s autonomous decision-making.” How will Michigan legislate against or prosecute the next Kermit Gosnell when the law must bow to the “autonomous decision-making” of patients?

8. This amendment is needed to prevent “health care professionals” from going to prison for providing abortion care.

This amendment would invalidate state laws that require abortion clinics to meet the same basic safety standards as other health care facilities, such as hospitals and outpatient surgery centers. Under the amendment, no law can be enacted regarding safety standards if that law “infringe[s] on that individual’s autonomous decision-making” during pre-viability. This means that no state law can prevent a woman from seeking a cheap / back-alley abortion from an unlicensed physician. This may sound radical. It is.

The amendment would allow abortion throughout pregnancy until birth, which is a tremendous mistake. Elective abortion is not health care; it is the violent death of the unborn child. Abortion has serious inherent risks, and women deserve to be fully informed. We now know that induced abortions have been associated with an increased risk of infection, hemorrhage, preterm birth, future miscarriages, infertility, cardiovascular disease and death. Abortion also has been shown to increase the risk of breast cancer, anxiety, depression and suicide.

Pregnant women and minors need health care professionals that provide ethical, life-affirming, high-quality and evidence-based medical care. We need to provide support and legal protection to the expectant mother and her baby or babies. We do not need this amendment.

Do not just trust us on this. Read on your own, talk to others, and make an informed decision before Nov. 8, 2022. We recommend John Bursch’s article in the Detroit Free Press, “Proposed Reproductive Freedom Initiative Goes too Far”,[1] “Overview of Michigan Ballot Initiative” from the Lozier Institute,[2] and the full text of the “Right to Reproductive Freedom” amendment itself.[3] There are and will be many articles providing contrary theories about what the text of the amendment means; see for example, the Detroit Free Press article purporting to state, “What it will and won’t do if approved.”[4] Read these contrary theories as well. You are a Michigander, and on Nov. 8, 2022, you are a legislator. What should your constitution say?