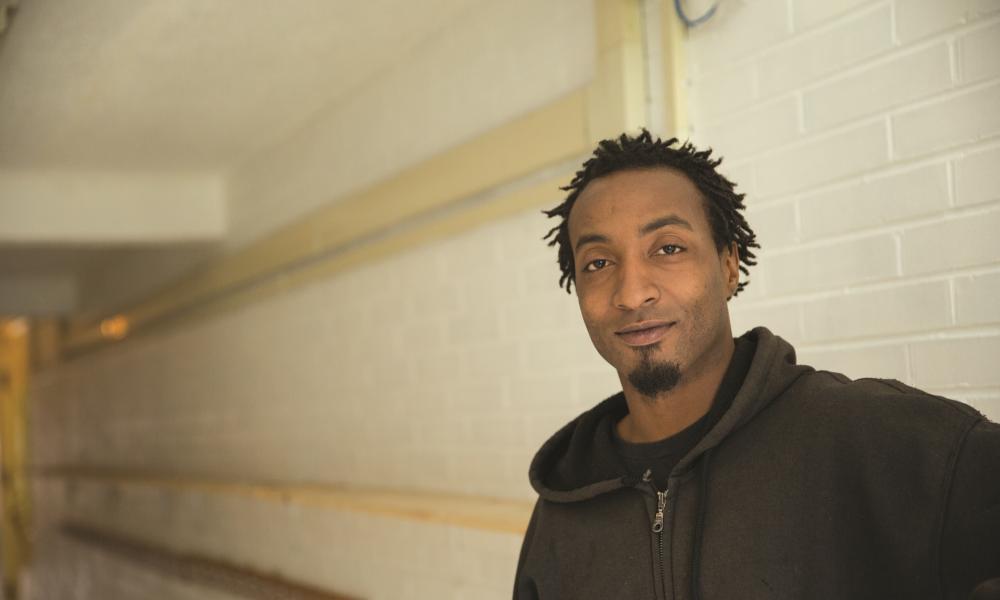 On trip with N.E.W. Life Center to see Pope, Jay felt like "bursting for joy"

Jarius (Jay) Montgomery started life in Flint, one of 15 children in a household where no one went hungry, but money was tight.

“I remember my father struggling to get a mortgage after we could no longer afford the rent on our house. He and my mom got us ready and took us to a lender. They lined my brothers, sisters and I up in the waiting room chairs and we sat there quietly until someone agreed to see us. My parents walked out of that office with the loan for the house they still live in today.

“After I graduated from high school, I served six years in aviation logistics for the Marines. When I got deployed as a tank driver in Iraq, things were great at first. But through a series of events, I learned some powerful lessons about vigilance and living with uncertainty 24/7. One day on patrol, the tank behind us missed a turn. I watched it fly 10 feet into the air and saw guys from my company evaporate into pink mist or melt into gel around their empty boots and uniforms.

“I haven’t slept more than two hours at a time since I came back from Iraq. I’m not crazy, but I am always alert. The Flint I came home to felt a lot like the war zone I had just left.

“My dad had PTSD [post-traumatic stress disorder] when he got home from Vietnam, so he knew what I was going through. I think he didn’t feel safe with me – not knowing how I was going to do. He still had my brothers and sisters at home, so I couldn’t go back to my parents’ house.

“I couldn’t find work, so I moved in with different family members for a time. Then I was on the streets. I had a daughter, SuRiah Americle, who was the light of my world, but she died from a heart defect before her first birthday. Shortly after that, my grandpa passed, then my sister. I could have fallen farther and farther into darkness, but because God was instilled in my life at a young age, I knew it would get better. I just didn’t know when or how.

“One day, as I was walking to McDonald’s to apply for a job, I saw some men in bright green T-shirts picking up garbage in an empty lot. I knew if they weren’t on work release, they must be getting paid, so I asked them what was up. ‘Man,’ they said, ‘St. Luke got it going!’ They told me about the N.E.W. Life Center’s men’s program, so I walked straight over and signed up.

“After I went through the job training and life skills lessons, the sisters [Sister Carol and Sister Judy] hired me to run the lawn work program. I’ve been here about three years, and I can’t say enough about how amazing they are.

“A few months ago, they asked if I’d like to travel to Washington, D.C., to see the pope. The drive down was great. As we approached D.C., I was on high alert. Knowing how guarded the city is, I kept looking at the woods, thinking there must be soldiers on recon in the trees. When we emerged into the city, it was crazy!

“The day the pope spoke to Congress, we lined up along Pennsylvania Avenue at 4:30 a.m. I got a picture of the president’s motorcade going by. I couldn’t see into the tinted windows, but I wonder if he saw me because a Secret Service agent told me to step back away from the road. When the pope came by I was this close!

“Oh my gosh, it was so loud, but it wasn’t chaos or anger. It was all love! There were people waiting along the street speaking different languages. As Pope Francis moved down the street, though, we were all the same. It was just this roar like ‘AHHHH!!’ rising up from the crowd like a wave as he passed each section.

“Pope Francis turned toward us and the hairs on the back of my neck just stood up. I didn’t know my face could have goose bumps, but it did! As long as I could see him, my body was in a chill state. I felt like my chest was going to burst open with joy.

“I see God working, giving me another chance at life. I’m walking by faith because everything I tried to do on my own failed. Before St. Luke, I didn’t know what I was going to do next, but I think I’m kind of like the prodigal son. My family has welcomed me back, and I just started a great job as a welder.

“I think God put me through hard times as an adult so I can help others and pass along the love I have received. God is finally putting me on the right track.”

The St. Luke N.E.W. Life Center is a faith-based environment providing life skills, education and workplace training to empower women and men to become self-sufficient. Men and women who have been helped by the center's ministry have been featured in previous issues of FAITH Magazine, as part of the  Diocese of Lansing's Faith in Flint initiative.