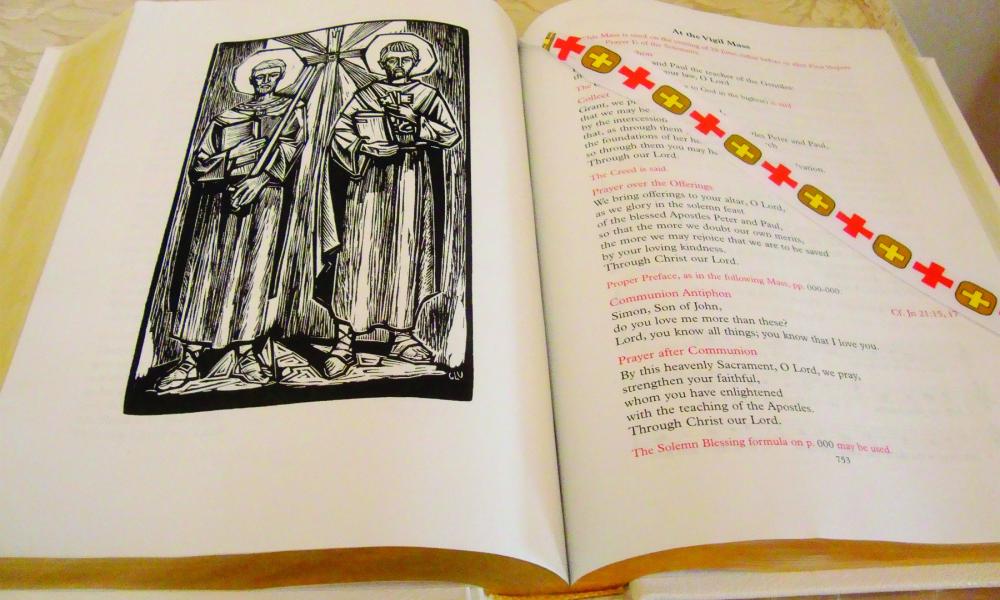 The Roman Missal is the book that contains the words used at our Mass. In 1969, Pope Paul VI promulgated the first edition of the Roman Missal after Vatican II.  A slightly revised second edition appeared in 1975. In 2000, Pope John Paul II promulgated the third edition. (Not a lot changed, but there were new texts for the many saints whom he had canonized.)  As usual, this liturgical book was released in Latin  and then conferences of bishops all over the world began to translate it into various languages.

Who does the actual translating from Latin to English? In 1963, the bishops of the United States joined 10 other English-speaking countries and formed a group of linguistic scholars called the International Commission on English in the Liturgy (ICEL). They prepared translations for the Missal, the Liturgy of the Hours and all our sacramental rites. Their work was guided by a document Comme le Prévoit (issued by the Consilium and Congregation for Divine Worship, Jan. 25, 1969). This guideline permitted translators to use “dynamic equivalence” – not word-for-word translation, but phrasing that better suited the cadence of each vernacular language.

ICEL never ceased to work on the missals and other liturgical texts. But when the third edition of the Roman Missal was released, it was quickly followed by a new set of guidelines for the translators – Liturgiam Authenticam: On the Use of Vernacular Languages in the Publication of the Books of the Roman Liturgy. This guideline required a more literal translation. Some key points in Liturgiam Authenticam are worth noting:

• Scriptural allusions should foster a correspondence between biblical and liturgical texts

• Appreciating “sacral language,” that is, we don’t address God in everyday speech

• Using a consistent manner of rendering an expression throughout the text

• Translation of terms as in the original – same person, number and gender

• Exclude any prejudice or unjust discrimination

Guided by these stronger norms, the conferences and ICEL divided the new Roman Missal into 13 manageable sections – the Order of Mass, Proper of Seasons, Proper of Saints, etc. From February 2004 to November 2009, ICEL submitted each translated section to the bishops. At each stage, words were debated and refined, amendments made, and drafts went back and forth.

Finally, the United States Conference of Bishops (USCCB) approved each section and sent the text to the Holy See for a recognitio, or final approval.

Meanwhile, other countries around the world were submitting their texts to Rome in English, French and German. Still other language groups continue to translate texts.

The USCCB received the first recognitio for the Order of Mass in June 2008, then the 12 remaining sections received a recognitio on March 25, 2010.  Now the painstaking task of making sure that every line is perfect is underway – all punctuation, capitalization, and word order.  Soon, the texts will be sent to publishers who will create worthy books for our use at Mass.

It takes a long time to do such holy work. Words matter. The words of prayer matter even more.

For the complete history of the liturgical books, go to www.FAITHmag.com and click on Theology 101.

Symbol of the month – Unicorn

According to legend, no hunter could take a unicorn by force, but it could be captured by trickery. The hunter was required to lead a virgin to a spot the unicorn was known to frequent, where she was left alone. The unicorn would sense her purity and run to her, falling asleep in her lap. The unicorn is thus a symbol of purity and of feminine chastity. It has been used as an allegory of the Annunciation and of the Incarnation of Christ, who was born of a virgin. It is most often used as an attribute of the Virgin Mary.

St. Gregory Nazianzus is the Doctor of Theologians. He was the bishop of Constantinople and is widely considered the most accomplished rhetorical stylist of the Patristic Age. He is famous for his writings and sermons on the Trinity, which continue to influence theologians today. He is also noted for his contributions to the field of pneumatology (the theology concerning the nature of the Holy Spirit), as he was the first to use the idea of “procession” to describe the relationship between the Spirit and the Godhead.

Along with St. Basil the Great and St. Gregory of Nyssa, St. Gregory Nazianzus is known as one of the Cappadocian Fathers.