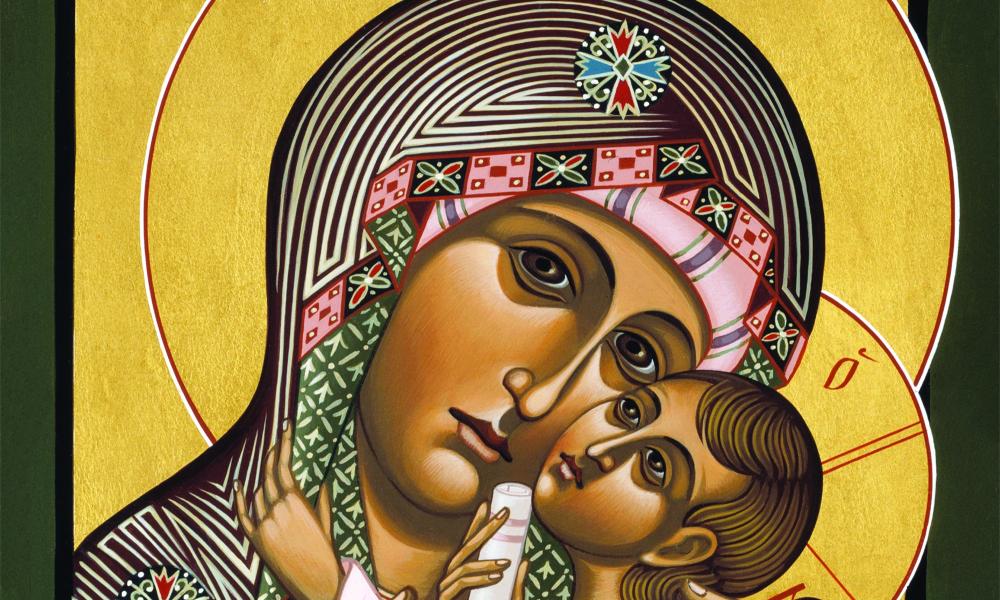 In thanks for Women

One of my fondest memories of my Grandma Boyea was stopping in to see her occasionally and sitting down to a cup of green tea with her. She rarely sat down, but always did for a cup of tea. Though a city girl (Lansing), she married a farmer and helped him take over his parents’ farm in 1930 in Cheboygan. She was a hard worker and as tough as nails, but she had a rule: She never went into the barn. She believed, no doubt correctly, that if she went there she would become engaged in that work, thus doing her husband’s and sons’ work. She knew they would never help her in the house!

... the equal dignity and responsibility of women with men ... is realized in a unique manner in that reciprocal self-giving by each one to the other and by both to the children which is proper to marriage and the family. What human reason intuitively perceives and acknowledges is fully revealed by the word of God: the history of salvation, in fact, is a continuous and luminous testimony of the dignity of women. (Familiaris consortio, 22.3)

Of course, the greatest tribute to the dignity of women was given by God in taking on human flesh from the Virgin Mary, whom we honor in this month of May. Some may want to dismiss Mary since she was without sin and had the perfect kid (I know I did not provide that for my mom!) and a husband who received visions from God. How normal is that? Yet, the key to our honoring Mary is that we recognize that she wanted to do, and then did, the will of God, something that is a model for us all.

We are celebrating the resurrection of Jesus Christ from the dead, Easter. On the first Easter, Mary Magdalene told the disciples, “I have seen the Lord.” She handed on her faith; she proclaimed the Gospel; she did what any mother does and announced good news to her “family.” She has often been called the apostle to the apostles.

My mother does not like it that I talk about family members during my homilies. However, she is rather taken by being called the “bishop’s mother” at her parish Up North. She also spends a good hour each night reviewing all her memorial cards and praying for each and every one whose name is written on those cards.

My youngest sisters are twin girls, 19 years younger than me, and they are great moms. They especially encourage their sons to be creative and to be independent. Their husbands also are real blessings in our extended family and they are great dads.

This month is really a celebration of women – of Mary, of moms and grandmas, and of the Easter announcer, Mary Magdalene. It is all about giving us life in the first place. And it is all about sharing life with us, whether it is a cup of tea or the Good News of Jesus Christ. The amazing thing is that they are at their best when they realize that they do this because they see themselves as stewards of God’s gifts, when they see that all that they have and are is a result of the gift of God as well.

So this month, let us not only honor all women, but let us thank God for their presence in our lives as manifestations of God’s own grace and love.