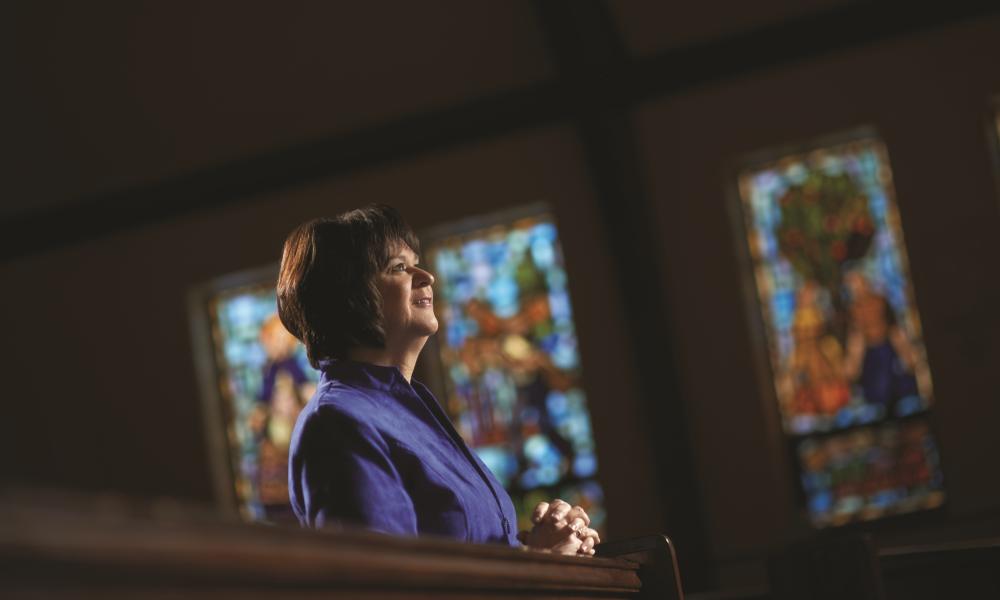 Teresa's most important gift to herself for 30 years, A Women's Retreat

In 2013, Teresa Hurd lost her job, her oldest son died unexpectedly and her husband lost his ability to work. Her unswerving belief and the spiritual strength she has developed over 30 years of attending retreats have helped her through.

“At retreats, Father Larry Delaney likes to say, ‘If you want to make the Lord laugh, just tell him your plans.’ That’s a good way to describe last year for me. Whenever I’ve said: ‘Now listen, God. I’ve had enough,’ I could almost hear him laugh and say, ‘I’ll tell you when you’re done.’

“God guides us in increments, you know? Thirty years ago, my vocation was wife and mother of six small children. I was ‘Penny Pew,’ going to Mass, but not really experiencing my faith, when I first heard about the Women’s Retreat at St. Francis Retreat Center. I was nervous about being away from the house all weekend, but my husband encouraged me to go, and I needed a break. I signed up with my sister, Chris, and away we went!

“When we arrived, I got a room to myself – small but comfortable – and home-cooked meals made by someone else. I felt like I was on vacation, except that ours was a silent retreat. Well, I’m a talker, so very soon my sister and I headed out to explore the grounds where we could visit all we wanted. The grounds are so awesome – acres and acres of paths through the woods and fields! I think we explored them all that first year.

“I decided to set aside a little money each month as a gift to myself so I could attend the annual retreat. After my third or fourth year, the spiritual benefits of that investment really kicked in. I developed deep connections with the women who attended with me. Young, old or in between, each had a special gift to share and each has become an important part of my faith journey.

“Years later, when Father Larry Delaney came to St. Francis, he lifted the ban on talking. Of course, I thought this made the retreats even better! He has a wonderful way of using humor and wisdom to help us look at things from all aspects. Father Larry encouraged us to explore Church teachings faithfully, but he also got us thinking. I outgrew my ‘Penny Pew’ phase and began forming bonds that have lasted to this day.

“About that time I began volunteering as a catechist and later was hired as a part-time religious education secretary. When my husband’s work dropped our health insurance, I was forced to leave the Church position to work full time at the Eaton Rapids school system. God enabled me to provide insurance for my family, but I missed working for the Church. Soon, God called me to serve as youth minister in another parish.

“My interest and curiosity in our faith grew with every retreat. Eventually I became commissioned as a lay ecclesial minister through Siena Heights University. The lessons and wonders of our faith sustain my work in the Church – now as youth minister at St. Patrick Parish in Brighton.

“Along with the personal growth and connections retreats provide, I learn so much! I particularly remember one presenter who had lost her husband and two adult children. She shared her experience with us and talked about moving forward in life through challenges. Last March, her message became very important when I got the call every mother dreads.

“My 38-year-old son, Chuck, was being rushed to our local hospital. He had spent the night with some friends, celebrating and playing pool. When his friends woke up the next morning, they found him unconscious on the floor.

“When I got the news, I jumped in my car. As I was on my way to the ER, I got a second call telling me he was being air-lifted to the regional neurological unit at Sparrow Hospital. Late that evening, our son’s doctor pulled our family aside and gently guided us to the realization that Chuck was not coming back. We made organ donation arrangements and contacted family and friends to say goodbye. Through this horrible time, his friends and others kept telling me stories about the wonderful things our son had done for them. We took great comfort in hearing their stories and in knowing that, even in death, Chuck was continuing to help people through the Gift of Life.

“I gave the eulogy at Chuck’s funeral. Others said to me, ‘This is your son, how can you?’ I replied, ‘He is my son. How can I not?’ I just had to share the wonderful things I was learning about Chuck. I stood before the entire church and did not break down because I know my son is in Christ’s kingdom. He went to sleep and woke up in the arms of Jesus.

“When people ask me how I am holding up, I reply, ‘I am not holding up at all. Christ is holding me up, and he won’t put me down until I am with him, Chuck and others in paradise!

“When the women’s retreat rolled around a couple weeks after Chuck’s death, my sister, Chris, called. ‘Are you going this year,’ she asked, ‘or is it too soon?’ I said of course I would go. I needed my annual retreat this year more than ever before, but … I probably wouldn’t talk about Chuck’s passing. Well, in his welcoming remarks, Father Larry told our group we had a retreatant who had recently lost her son. He knew I needed the support of my ‘retreat family’ – whether I realized it or not! That started an outpouring of love from everybody that flowed all weekend! It was even more special because I was able to help and support others who came to me with their grief just as that wonderful presenter had helped me years earlier.

“Father Larry likes to say that when life gets tough, you have to ask yourself, ‘Are you gonna get bitter or are you gonna get better?’ Last year, I think God really challenged me to answer that question. Because I give myself the gift of the Women’s Retreat every year, I am able to accept my losses as part of my spiritual journey. More importantly, I am able to feel God’s love and grace flowing around and through me. That’s something I will enjoy until God tells me I’m done.”