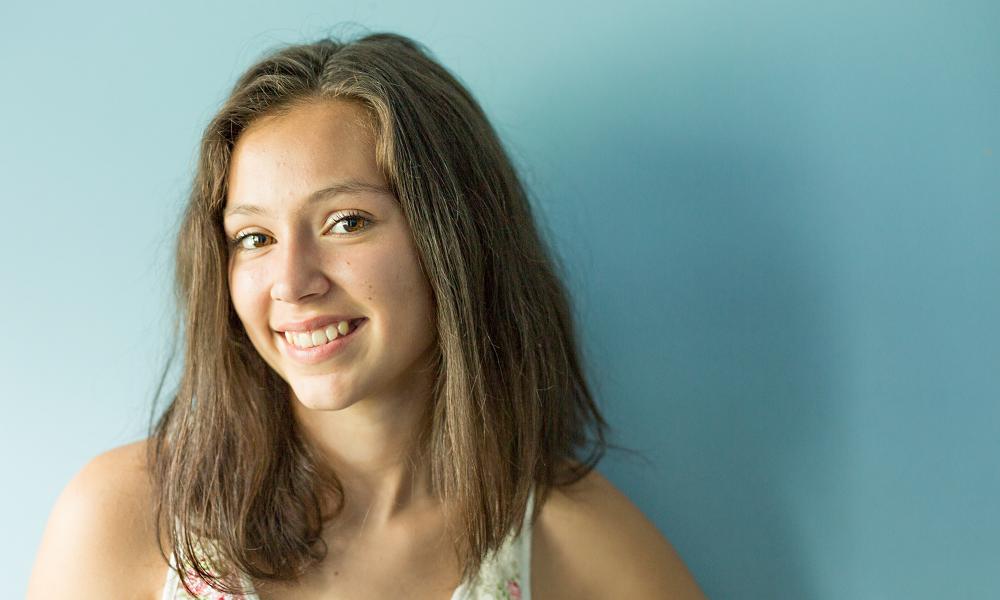 Teen Rebecca felt the presence of God at her confirmation retreat

For Rebecca Berkemeier, still waters run deep. Any given day might find this rising Jackson Lumen Christi freshman playing saxophone, running cross country, checking Pinterest, watching Netflix or hanging out with close friends. In her last year of middle school, she participated in music ministry and Builders’ Club, and earned the Service Award for her class. The youngest of a musical family, Becca especially loves worship music because it opens channels to a deeper connection with God.

Her favorite song, “Oceans” (Where Feet May Fail), by Hillsong United, helps her go deeper in her faith when she gives herself to the music. And though she has loved it a long time, the chorus of “Oceans” holds an even deeper meaning since the confirmation retreat when she and her classmates found safe harbor in the presence of God:

And I will call upon your name

And keep my eyes above the waves

My soul will rest in your embrace

For I am Yours and you are mine

“Middle school is incredibly stressful,” Becca says frankly. “Wishing we could fit in and wanting to be perfect, we set standards really high. Then if you can’t live up to those standards, you secretly feel like a failure. We act like nothing bad’s happening, but we get caught in this undertow trying to keep others from finding out. We sit next to each other in class and never let on. Even at a Catholic school, some kids tend to be like, ‘Oh, faith’s not cool,’ or ‘All this stuff is so lame,’ when we secretly need that lifeline.

So when our confirmation preparation included a retreat with other middle school kids from around Jackson, I worried. What if they found out how much my faith really means to me? I cry at every Disney movie ever made. How was I going to keep my cool through two nights with more than 100 other kids? I wouldn’t even have my family to help me.

“Of course I went, and things unfolded pretty much as I expected. We had small-group discussions about things like the beatitudes and, ‘What’s one thing we would ask Jesus if we could talk to him?’” Becca says that some of her classmates didn't seem to want to share personal feelings, however.

“After dinner on the last day, we gathered in the parish hall, where the organizers had the lights down low and Christian music playing. They had eucharistic adoration and four priests (one in each corner of the room) ready if we wanted to go to confession.” Becca explains that a number of adults stood ready to pray over anyone who requested it, but some kids just sat there making fun of the retreat.

“Adoration gives me a sense of peace, so I headed straight to it. Sitting before the Eucharist with the music playing softly and lights low, I could feel the presence of God. It was so strong, I felt stressed out. I was afraid others could see how emotional I was getting.

“In tears, I headed to the back corner for confession and told about all the things I do just to fit in. I talked about wanting to be perfect and to belong, but never feeling good enough, never measuring up to the others. When I finished, I could feel God’s embrace even more powerfully, so I headed straight to the bathroom, where none of the others could see me cry all over myself.

“It wasn’t that I was sad. I can’t really put into words what I was feeling. Powerful, amazing, indescribable are as close as I can come. God’s love just overwhelmed me so that all I could do was sob. After a few minutes, I got it under control enough to head back into the hall. Immediately I knew something had changed.

“God had touched them, too.

“I think a lot of people weren’t aware of what was happening, because it’s not anything we feel every day. It seemed that everybody felt the presence of God go through us. Almost all the kids were crying. There were lines of students waiting for reconciliation and prayers. I think I got prayed over five times, and I kept bringing more people with me. At one point, we had 30 kids in a circle of blessing.

“Kind of like getting hugged by God, it made us feel very safe and united. Middle school sometimes seems like a competition, but that night we realized that we have a lot more in common than we think. We hear that all the time, but sharing an experience like we did that night, you actually begin to believe it. I never thought many of the people I was with could go through something like that. But we did. Together.

“The next day at school, we all knew what happened. We told our teachers about it. Some cried retelling it, some were excited. It was kind of weird actually, because others denied that they had cried at all. Some still deny the impact of that night, but many of us grew in our faith from the experience. The mean teasing went down a bit. We had popular kids standing up for people who were vulnerable. Maybe it helped them know it’s the right thing to do. Now it isn’t so much about ‘Will they like me or not?’ We just do it because we know it’s right.

“I’m becoming a better person because of this. It put things in perspective and helped me want to build my faith into my daily life. The closer I am with God, the better I am because I’m at peace – the kind that comes from feeling safe and loved.

“Even things I used to think were so lame make me feel better about myself, because it makes me feel like I’m doing something right. I used to feel really intimidated by music ministry. Going in front of my whole middle school and singing made me embarrassed. But now I do it because God needs a choir and it’s the right thing to do.

“I always want to be doing something right. It’s not like I’m donating $5,000 or moving to Africa to help build houses, but this is kind of my mini-way of helping the world keep its eyes above the waves. The small things we do every day can add up to so much when God’s presence is holding us up.”

Check with your parish to find out what is offered to prepare for the sacrament of confirmation. A retreat is often a part of this preparation.