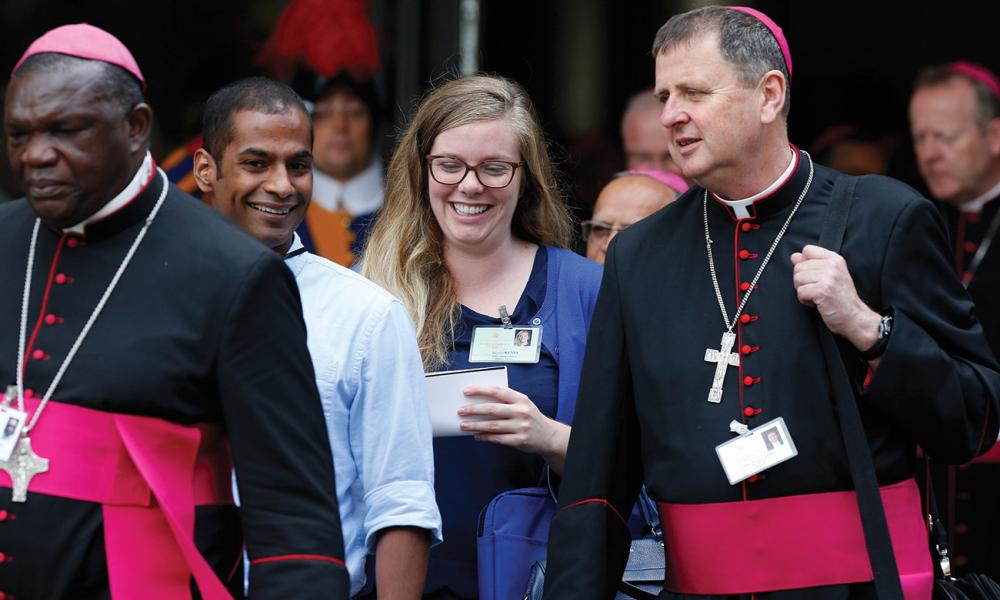 Bishops and youth delegates leave a session of the Synod of Bishops on young people, the faith and vocational discernment at the Vatican Oct 5.

The October issue of FAITH presented a section titled “Young People and the Church” in anticipation of the Synod on Young People, the Faith and Vocational Discernment, which took place in Rome during the month of October. Young people throughout the world responded to a survey from the Vatican in advance of the gathering. Thirty-six young people (ages of 18-29) were chosen to join the bishops for the synod.

After three weeks of listening to speakers and discussing topics agreed upon beforehand, the synod fathers debated upon and then drafted a message to be included in the final document. This document, which will be published in English in a few weeks, touches on: the work of the Spirit in the life of the Church; the role of young people in renewing the parish community; the need for the Church to find new ways to present its teaching on sexuality; the importance of preventing abuse by clergy; the Church’s commitment against every discrimination; the role of women in Church leadership; the art of discerning and vocation; formation of the conscience; and the centrality of the liturgy in the life of the Church.

In his homily at the closing Mass of the Synod on Oct. 28, Pope Francis challenged participants to embrace “the three fundamental steps on the journey of faith”: Listen. Be a Neighbor. Bear Witness.

The Synod Fathers concluded the gathering with a letter to young people. Here are some excerpts:

Our weaknesses should not deter you; our frailties and sins must not be an obstacle for your trust. The Church is your mother; she does not abandon you; she is ready to accompany you on new roads, on higher paths where the winds of the Spirit blow stronger – sweeping away the mists of indifference, superficiality and discouragement.

For a month, we have walked together with some of you and with many others who have been united to us through prayer and affection. We wish to continue the journey now in every part of the earth where the Lord Jesus sends us as missionary disciples.

The Church and the world urgently need your enthusiasm. Be sure to make the most fragile people, the poor and those wounded by life your traveling companions.