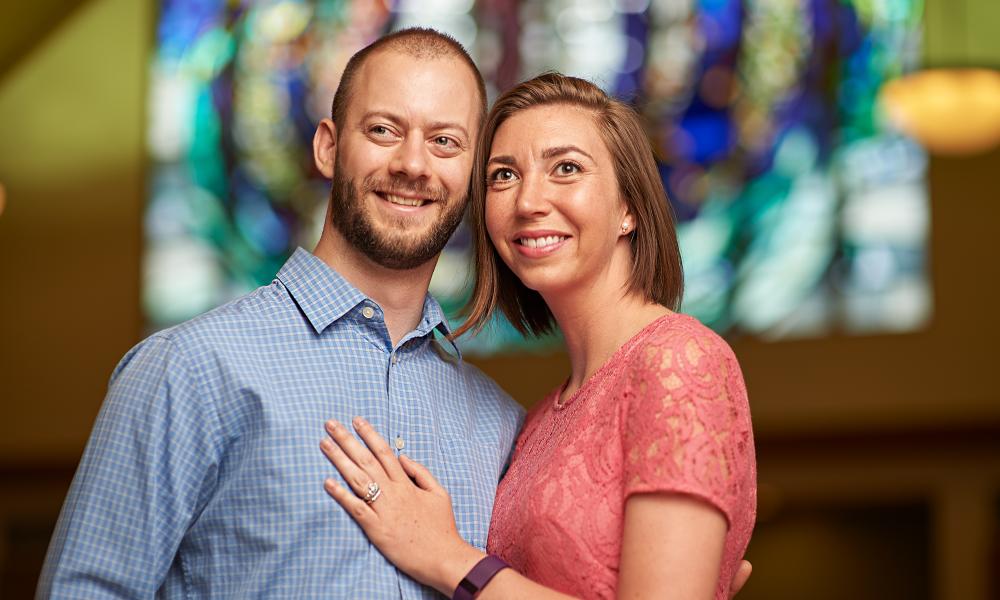 From stubborn arguments to respectful talks

What Rachel and Charlie learned in We C.A.R.E.

With their fingers woven together, Rachel and Charlie Kovelle radiate mutual love and respect. When they speak, their eyes lock as they listen — really listen — to what the other shares. As natural as this deportment has become, this was not always the case.

“I would say we had a lot of trouble communicating the first couple years we were dating, mostly due to our jobs and homes being quite a distance from each other,” explains Rachel. “We relied on texting to communicate, and in texting you can’t pick up someone’s connotations. We argued so much. We were both stubborn and unwilling to back down.”Eventually, the distance gap closed, things improved and Rachel and Charlie became engaged. Talks about their future life together included practicing a mutual faith. For Rachel, having been raised in multiple traditions (Christian and Jewish), faith had not been a priority, but she was willing to make some changes for their relationship. Charlie, raised Catholic, relayed to Rachel how important it was to him that they raise their kids Catholic.

“I felt,” says Charlie, “if we were actually going to practice a faith together, starting before our marriage would help form a firm foundation of belief we could share with our future children.”

They visited St. Patrick Parish in Brighton and were captivated by its warm, welcoming ambiance and the pastor, Father Karl Pung. Charlie explains: “Father Karl is the most down-to-earth priest, and was a huge pull for both of us. We had a great initial meeting with him, and so Rachel began the RCIA process. Shortly after, we began our marriage prep. I knew one program, We C.A.R.E. (Communication And Relationship Enhancement), focused on communication.” But Charlie was hesitant because, as he says, “I was older and felt I had seen or observed enough in life to have an understanding of successful interaction. But sitting down and intentionally talking about the subject showed me there were other methodologies I had not been aware of.”

Rachel chimes in, “I was apprehensive, too, because I pre-judged the program and its facilitators. I was so wrong; we love them! Getting to know a good Catholic couple and hearing their personal stories about difficult communication skills at the onset of their marriage had us laughing … and relating! It was great to hear their examples because we didn’t feel alone.” Charlie, an engineer whose natural inclination is to fix things, really resonated with the husband half of the facilitator team, also an engineer, who relayed that not everything needs to be fixed. “Understanding just that little tidbit was so helpful,” he says.

We C.A.R.E classes follow a formula of thought-provoking questions, teaching videos and then a chance to privately implement the communication tools in an actual scenario of their lives. The Kovelles enthusiastically filled their interpersonal toolbox. One skill the couple regularly practices is the speaker-listener technique, where only one person talks at a time and then relays what they have heard. “Initially, learning the process was weird. We interrupted each other a lot. Within our marriage,” says Charlie, “we have assimilated this into our daily lives.”

“Timeout is another tool they taught us,” adds Rachel. “Whoever needs one can call one, but then that person also has to set a point for time in. I used to divorce myself from our arguments and walk away. Now I can take a step back for a few minutes and return to the discussion without completely shutting down.”

Charlie says, “Stick with what We C.A.R.E. teaches, and apply what you have been given. It is one thing to hear it, but implementation is so important. Keep an open mind, because otherwise we become calcified within the walls we erect in order to build our own ego. Because of what I learned, our relationship is simply better. Between the RCIA process and We C.A.R.E., I have been changed.”

With a chuckle, Rachel adds, “We are two separate people and always will be, so arguing is natural. I think it is amazing that we are as happy as a married couple can be and we still quarrel. Because of the great We C.A.R.E. program, we know how to maneuver. They teach you all the skills, but if you are not going to use them, they mean nothing. You simply have to want a marriage where you are open, vulnerable, intimate and honest with your partner. ”

Both agree those attributes are most evident with what they consider the greatest communication skill they obtained: learning to pray together. In a quick back-and-forth together, they say, “This was such an 'a-ha' moment!” Charlie explains, “Neither of us had ever prayed with a partner before. It was out of our comfort zone and awkward at first, but the more we did it, the easier it got. Praying together involves total vulnerability and disclosure, and has brought us so much closer. We pray before every meal and often at night.” Rachel continues: “We will stop an activity to pray for a need that has come to our attention. We close our eyes, join hands, begin with thanks and then add whatever intention is required. When you really pray, you pray from your heart; it is very intimate.”