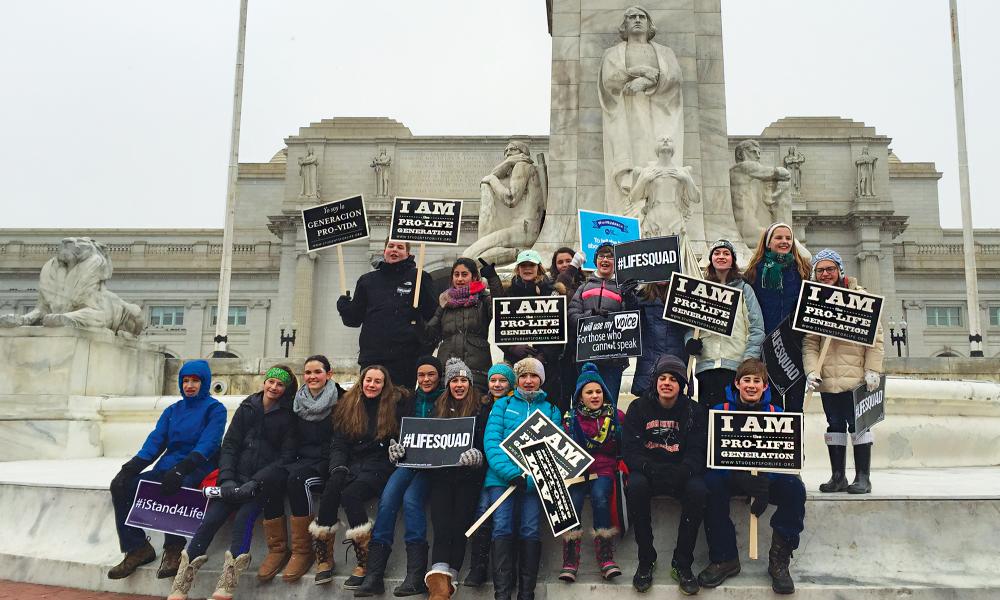 Standing up for right - even when it's not convenient

Stranded on the highway for life

Grace Benz had heard about the March for Life from her older siblings, and she couldn’t wait to experience the annual event firsthand with her eighth-grade class from Spiritus Sanctus Academy (SSA) in Plymouth. But she got more than she bargained for when the group wound up in the middle of a snowstorm that delayed their return – and allowed Grace to trust God in a whole new way.

“I thought I knew what to expect, but it definitely turned out differently than we planned,” says Grace, a student at Father Gabriel Richard High School in Ann Arbor and a member of Christ the King Parish. “I didn’t even realize how much it affected me until after we were home for a few days.”

The group boarded the bus for Washington, D.C., on Jan. 20, 2016, even though a snowstorm was being forecast for the East Coast. Although other schools and groups from Michigan had canceled their pilgrimage to the March for Life marking the anniversary of Roe vs. Wade, Grace’s group arrived in D.C. the day before the march.

“I was excited, knowing I’d be standing up for the unborn even when there’s a blizzard on the way,” says Grace.

On Jan. 22, the day of the March for Life, Grace and her class walked the route for the march and then quickly boarded their buses for home, knowing the storm would arrive a few hours later.

While stopped at an exit in Breezewood, Pa., the group learned that the freeway was closed and they would have to spend the night. They were fortunate to snag the last remaining hotel rooms. Grace saw this as part of God’s plan during this Year of Mercy.

“We had a place to sleep, when many people were stranded on the freeway in their cars. God took care of us – he had mercy on us,” Grace says. “He even helped us get to Mass so we could receive him in the Eucharist.”

An accident on the freeway forced the SSA group to stay a second night – a Saturday. The principal of the school, Sister Maria Faustina, OP, spent time praying that afternoon about how to get the children to Mass that evening for the Sunday liturgy. (All the roads were closed and the nearest Catholic church was five miles away.) As the students and their chaperones played cards at a convenience store near the hotel, Sister Maria Faustina bumped into a priest she knew from Chicago. He was there looking for candles to celebrate Mass at another hotel with his group of 150 teens, the Crusaders for Life, who were also on their way home from the march.

“God is so funny,” says Grace. “I was there when Sister saw Father Nathan Caswell, SJC, and all of us had tears in our eyes because we knew God had put our two groups together.”

Late that afternoon, 200 people crowded into a hotel bar to celebrate Mass together. Grace was moved at seeing high school students praying and chanting fervently in Latin. Many of the prayers at SSA’s daily Mass are also recited in Latin.

“To see all these teenagers who believe what I believe was really inspiring,” Grace says. “They were all so happy and wanting to fight for this cause. I loved being able to share faith with these kids I just met and seeing other people love the Lord because he deserves that.”

That evening, the Crusaders for Life teens invited the SSA students to join them in an impromptu talent show. Grace and her friends sang “O Holy Night,” which they had recently sung together for a school Mass. Others presented skits, songs and even dances.

“It just proves that it’s fun to be with other people who share your faith,” says Grace. “Some people think loving the Lord isn’t fun, but it’s really the best fun of all, because when you follow what he asks of you, you have joy in your life, without the negative consequences.”

Meeting the group from Chicago made it clear to Grace that God's providence is powerful. “God really does bring good from bad situations and he’s working for us all the time, even if we don’t see it right away,” Grace says.

Grace says she’ll always remember the trip and its lessons.

“You have to stand up for what’s right, even when it’s not convenient,” she says. “You can’t stay in a bubble and say, ‘I love the Lord, but I don’t have to do anything about it.’ You have to go through the hardship of it, and you might get some criticism from people who don’t agree, but you have to go out.”

The irony of the experience isn’t lost on her either.

“I went on the trip to pray for God’s mercy on others, and it turned out God had to have mercy on us.”

The 2017 March for Life will be held in Washington, D.C., on Friday, Jan. 27. For more information on pro-life activities, visit the Michigan Catholic Conference website at www.micatholic.org/.