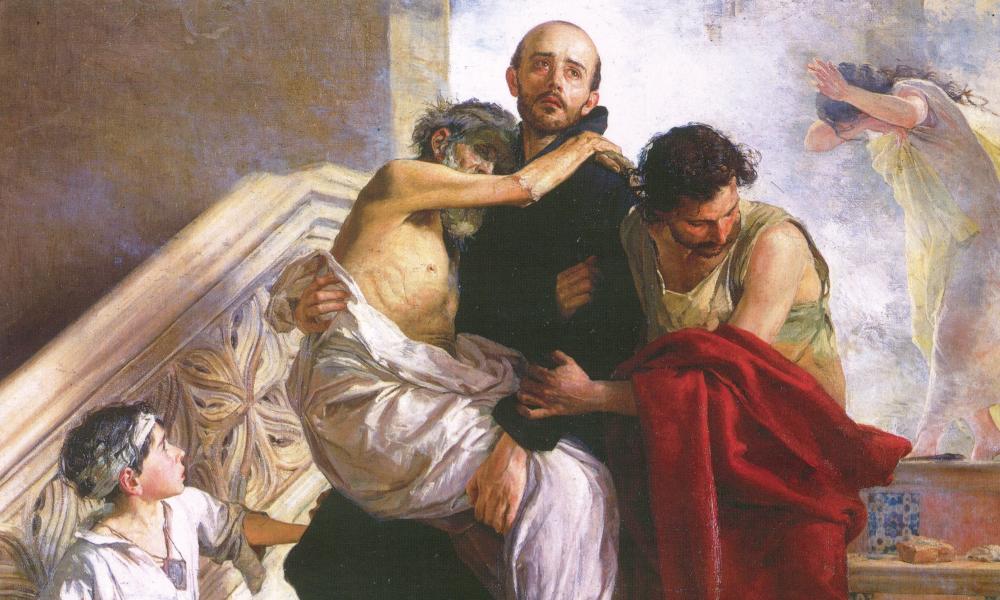 Despite a life full of tragedy compounded by poor choices, Saint John of God accepted God’s immense love for him and chose to express his gratitude by caring for the sick and mentally ill. His compassion inspired others to join him, and the Brothers Hospitallers was founded in 1572. The order now maintains a presence in 53 countries, operating more than 300 hospitals.

Kidnapped at eight years old and abandoned far from his home in Portugal, Saint John of God spent much of his life lost, restless and seeking purpose for his life. He worked as a shepherd in Spain until the age of 22, when the glamour of the soldier’s life lured him away. He spent 18 years as a soldier, narrowly escaping death on two occasions.

He eventually felt remorse for his sinful actions as a soldier, and sought ways to repent. John settled in Granada, Spain, to sell books, especially religious titles.

John experienced a major religious conversion in 1537 after hearing John of Avila preach one day. John began to publicly, beat himself, pulling out his hair and throwing himself in the mud to express sorrow for his sins. Committed to a mental hospital, he welcomed the beatings that were treatment for the mentally ill at that time. John of Avila visited him in hospital and convinced him that God is more pleased by serving others than by self-abuse. John responded by taking in the mentally ill and destitute, literally carrying them to his home by day and begging for alms to feed them at night. Many were moved by John’s sincerity, and began donating food and money to support his work. Others joined him as caregivers to form the Brothers Hospitallers.

John died in 1550. The story of his life demonstrates that God’s love can transform the lives of those who seek him, even when circumstances seem hopeless and our choices lead us far from him.

Founder:  Brothers Hospitallers, dedicated to caring for the sick poor and the mentally ill.

Quotes from St. John of God:
“For just as water extinguishes a fire, just so does charity blot out our sins.”
After receiving last rites:
“There are three things that make me uneasy,” he said. “The first is that I have received so many graces from God, and have not recognized them, and have repaid them with so little of my own.”
“The second is that after I am dead, I fear lest the poor women I have rescued, and the poor sinners I have reclaimed, may be treated badly.”
“The third is that those who have trusted me with money, and whom I have not fully repaid, may suffer loss on my account.