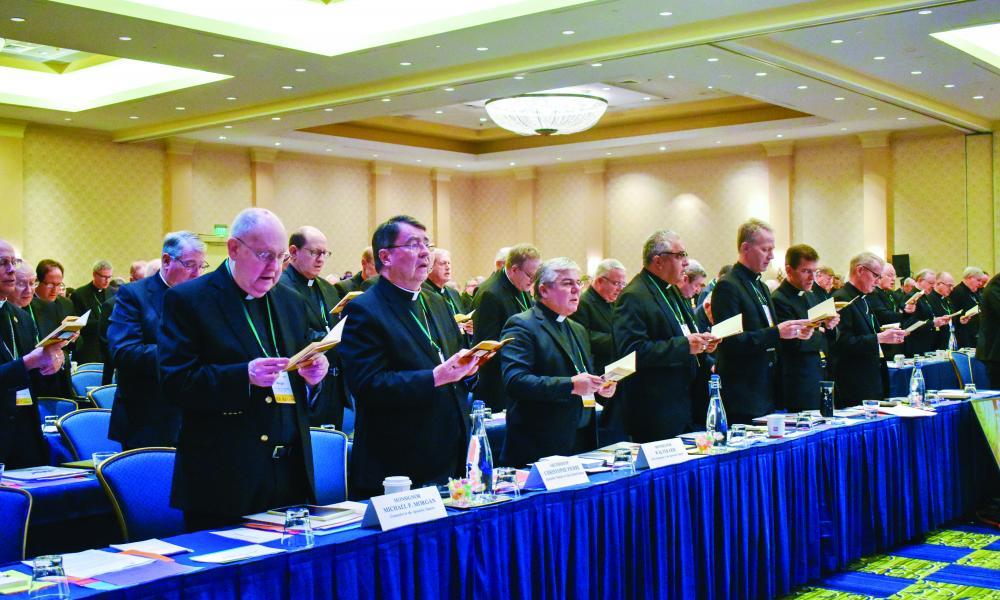 From Nov. 11-13, 2019, the United States Conference of Catholic Bishops (USCCB) held its 2019 Fall General Assembly in Baltimore. During the three days of the General Assembly, bishops elected new officers, approved a budget and supplements to Forming Consciences for Faithful Citizenship and discussed a wide range of topics. Here are just a few of the highlights:

The U.S. Bishops elected new officers at the 2019 Fall General Assembly. Archbishop José H. Gomez of Los Angeles was voted into the office of president of the USCCB. He had been serving as vice president of the conference since 2016. Born in Monterrey, Mexico, and ordained a priest in Spain, Archbishop Gomez becomes the first Latino and the first immigrant to lead the USCCB. Archbishop Allen H. Vigneron of Detroit became the new vice president. Archbishop Timothy P. Broglio, of the Military Services, USA, was elected secretary.

The U.S. Bishops voted to adopt four strategic priorities for 2021-24. Each priority includes several points of emphasis, including those listed below.

• Evangelize a culture in need of hope, especially the religiously unaffiliated.

Life and dignity of the human person: Serve the common good as the leaven in a free society

• Work to heal the scourge of racism and religious intolerance.

• Protect and defend the dignity of migrants and refugees, of the poor and those on the peripheries

• Extend and ensure effective collaboration with the laity.

• Create a culture that nurtures consecrated life and holy orders

The U.S. bishops approved nearly 300 new hymn texts for the Liturgy of the Hours. The Liturgy of the Hours, also called the Divine Office, constitutes the daily prayer of the Church. It marks the hours of each day and sanctifies them with prayer. It consists of meditative dialogue on the mystery of Christ through Scripture and prayer. (www.usccb.org)

They also approved the Program of Priestly Formation (PPF), 6th edition, for use in dioceses of the U.S. The PPF identifies four pillars of priestly formation: human, spiritual, intellectual and pastoral. These pillars inform the formation of every seminarian who is preparing for the priesthood.

A Call for a New Doctor

The honorary title, Doctor of the Church, is bestowed by the pope in recognition of a person’s contribution to the understanding and interpretation of sacred Scripture and the development of Christian doctrine. The Church currently recognizes 36 doctors, and the USCCB added its voice to a call for the pope to make it 37 by naming  St. Irenaeus  a Doctor of the Church.

St. Irenaeus was born in the 2nd century A.D., and is known for his focus on unity, encouraging all Christians to follow the same theological doctrine and defending the Church against the threats of Gnosticism – the growing belief of salvation by knowledge. Heavily influenced by St. Polycarp, who may have known the apostles or their immediate disciples, St. Irenaeus served as a bishop in Lyon, France. His writings emphasized the importance of early Church traditions and apostolic succession. During a time when the Gospels of Matthew, Mark, Luke, and John varied in popularity and reverence, Irenaeus established all four as canonical Scripture.

According to a Catholic News Service report by Carol Zimmermann, Auxiliary Bishop Robert Barron of Los Angeles offered the U.S. Bishops a five-step plan to help bring “nones,” or the religiously unaffiliated, back into the Church during his address to the body:

1.  Lead with social justice. This means reaching out to young people to engage them in caring for those in need through the corporal works of mercy.

2.  Promote writers and artists who highlight the beauty of the Catholic faith.

3.  Stop “dumbing down” the faith. Bishop Barron said, “We have to beef up the intellectual content of our religion classes …”

4.  See the parishes as missionary grounds. Bishop Barron observed, “Young people aren’t going to come to us; we have to go out to them.”

A New Pastoral Framework for Marriage and Family Life

Archbishop Charles J. Chaput of Philadelphia announced that a new pastoral framework for marriage and family life should be ready for a vote at least by the 2020 Fall General Assembly, if not sooner. The framework will have four pillars: Prayer & Relationship with Jesus Christ; Formation; Accompaniment; and Advocacy.

HISTORY OF THE USCCB IN BRIEF

1917  U.S. bishops form the National Catholic War Council (NCWC) to make it possible for U.S. Catholics to make donations and to commit personnel to provide spiritual care to those serving in World War I.

1919  U.S. bishops organize the National Catholic Welfare Council in response to the call of Pope Benedict XV for bishops to join him in working for peace and social justice.

2001  On July 1, the NCCB and the USCC are combined to form the United States Conference of Catholic Bishops (USCCB).