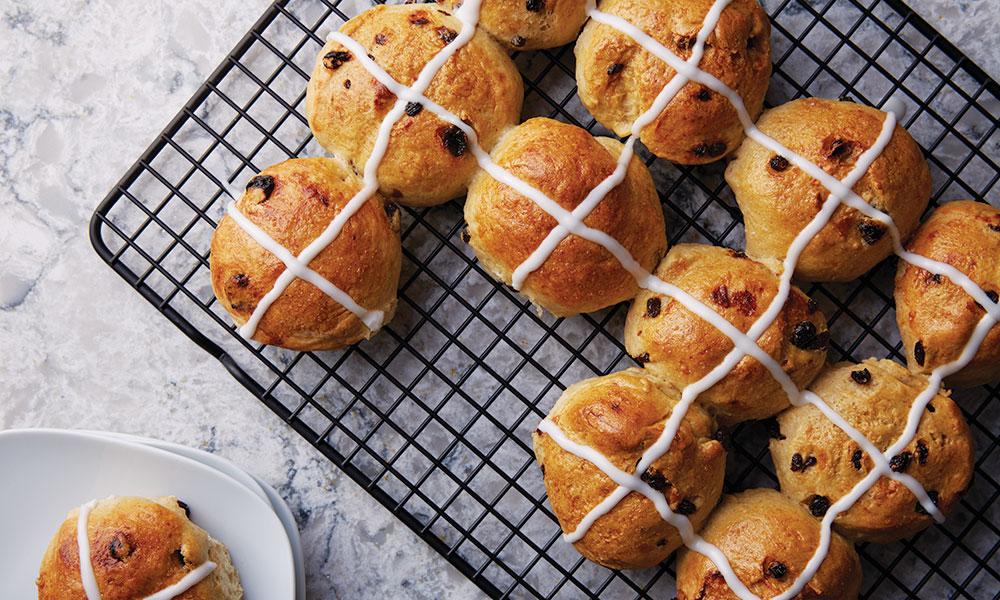 So what is a hot cross bun?

One a penny, two a penny, hot cross buns!

If you have no daughters, give them to your sons,

One a penny, two a penny, hot cross buns!’

Ahhh yes, the words of an all-too-familiar recorder tune many of us tortured our parents with in grade school. Even today it continues to irritate eardrums everywhere, mine included, making the association to the bun a cringeworthy one.

But for Europeans and those immigrants who have brought over the tradition of the Hot Cross Bun, there’s more to the story.

They are traditionally made and eaten during Holy Week and on Good Friday. But that has me scratching my head. A sweet bun made with eggs, butter and sugar seems a bit indulgent for a strict Lenten fast. I wanted to get a better understanding of these curious baked goods, so I did some research.

From expelling bad spirits in the kitchen, to them being banned and then reintroduced in England (on certain holidays) by Queen Elizabeth I, there is plenty of history, including legends and even superstitions, surrounding hot cross buns. So much so, I cannot fit it all in this column. So I’ll get to the important stuff.

As they did with other early Christian culinary traditions, the European faithful of days gone by positioned the hot cross bun as a commemoration of Christ’s crucifixion. It was a widely known custom to mark a new loaf of bread with the sign of the cross before baking or cutting into it. But for the hot cross bun, the cross was intentionally scored on top or piped with a flour and water paste to make the symbolic blessing stand out. From what I gather, the icing was a modern add-on that came later.

It is said that the buns originated at St. Alban’s Abbey in the 14th century where a monk baked and then distributed them to the poor on Good Friday. They later became popular in England and Ireland before making their way across the pond.

It still seems odd that something so delicious would be eaten on a day we reserve for deep reflection and fasting for our Lord’s suffering. But I certainly appreciate them much more now, knowing the religious intent behind the cross that adorns them!

In a small bowl, dissolve teaspoon of sugar in lukewarm milk. Sprinkle yeast on top. Let stand for 5-7 minutes or until bubbly and then give it a stir. In a separate small bowl, whisk egg, melted butter and sugar.

In a large mixing bowl, thoroughly combine flour, salt, and spices. Pour yeast mixture and egg mixture over the dry ingredients and combine with a wooden spoon. Fold in currants and raisins. Transfer dough to lightly floured surface and knead until dough is smooth and elastic (about 3-5 minutes).

Grease large bowl with vegetable oil. Place the dough in the bowl, turning once to cover evenly (w/ the oil), then cover tightly with plastic wrap. Place in a warm, draft-free area to rise for about 1- 2 hours or until doubled in volume.

Preheat oven to 375°. Punch down dough and then divide and shape into equal sized balls. Place in a greased 9”x13” pan or on a greased baking sheet. I prefer placing them closer together in the pan, since I like pull-apart rolls. Cover with plastic wrap and let rise in a warm, draft-free area for 40-50 minutes or until buns are doubled in size.

In a small bowl, whisk egg yolk and water and brush glaze over the buns. Bake for 18-20 minutes or until light golden brown.

For the icing, mix confectioners' sugar and enough milk to reach consistency for piping. Spoon icing in a plastic sandwich bag and cut a tiny corner off of the edge. Pipe a thin cross on top of each bun (or one continuous line, vertically and horizontally across). They can be served warm, right out of the pan or transferred to wire racks to cool slightly. They are best, however, served warm!