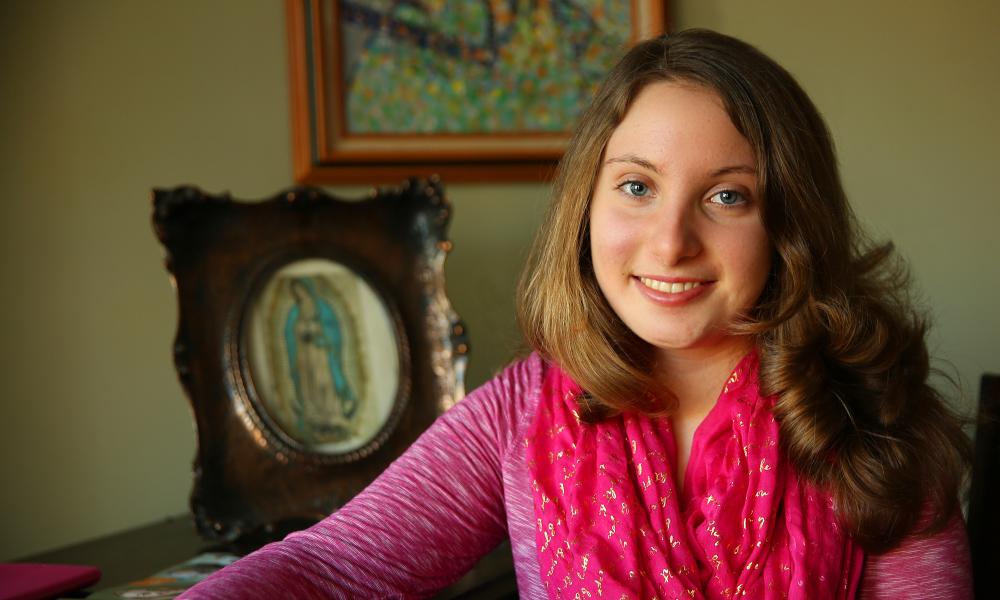 For Ciara Ferris and her family, 2016 began on a high note that is still gracing their lives. As an eighth-grader at St. Francis of Assisi school, Ciara traveled with her choir to sing at St. Peter’s Basilica for the 2016 New Year’s Day Mass, and her parents and younger sister got to go along.

“Every five years, we get invited,” says Ciara.

The well-respected choir participated in the 40th International Congress of Pueri Cantores, an organization that brings together Catholic youth choirs from around the world.

Because the St. Francis Choir of about 50 students is known to be well-behaved, easy to work with and talented, it is always asked back to Rome. And for Ciara, it couldn’t get any better than that.

“All my life, I have been known to sing, and I just love singing,” she says.

Ciara and her family arrived in Rome on Dec. 23, 2015, which gave them some time to relax and regroup while taking in all that Rome and the Vatican had to offer.

“It was really awesome. The churches were all really beautiful. There were pictures and paintings on all the walls,” says Ciara. “I really enjoyed the basilica and going through all the Holy Doors.”

The Holy Doors, normally sealed, are opened by the pope to begin a jubilee year. On Dec. 8, 2015, Pope Francis had opened the Holy Doors to inaugurate the Year of Mercy. They will close and be sealed on Nov. 20, 2016.

The Holy Doors were an especially important experience for Ciara and her family.

“I went through the Holy Doors, and I know that they gave me grace,” Ciara says. “Just being able to look at all those religious churches and everything, it just made me realize how amazing being Catholic is, and how I am really blessed and grateful.”

Singing at the New Year’s Day Mass at St. Peter’s Basilica was an amazing experience for Ciara and her family, including the rehearsal, where the pope was present.

“[At the rehearsal], everybody was there,” Ciara says. “We were in the front row, and then the pope made a surprise appearance. He was like five feet away from us.”

The Mass on New Year’s Day was spectacular, and something that Ciara will never forget.

“For the Mass, we got to be really close up, which was really nice. We had an amazing view, and there were so many people there from different choirs,” Ciara says.

Almost a year after the event, Ciara is still feeling the spiritual effects. She said that her experience interacting with people who were so kind has encouraged her to put sincere effort into treating others the best she can.

“There’s so much,” Ciara says. “Everyone was really nice, and I remember thinking that I should try and be nicer.”

Ciara said the trip to Italy also had a lasting impact on the choir as a whole. Their singing skills improved, and they have come to learn the spiritual value of the gift they have to offer.

Ciara wasn’t the only one in her family to walk away with grace after their trip. Her younger sister Keirsten made her first Communion there.

Months later, Ciara reflects on the importance of music in her relationship with God.

“I like to pray by singing,” Ciara says. “It’s really coming from your heart, and that’s just my favorite type of prayer. It’s really fun for me to sing.”

For information on enrolling in a Catholic school in the Diocese of Lansing, visit dolcatholicschools.com