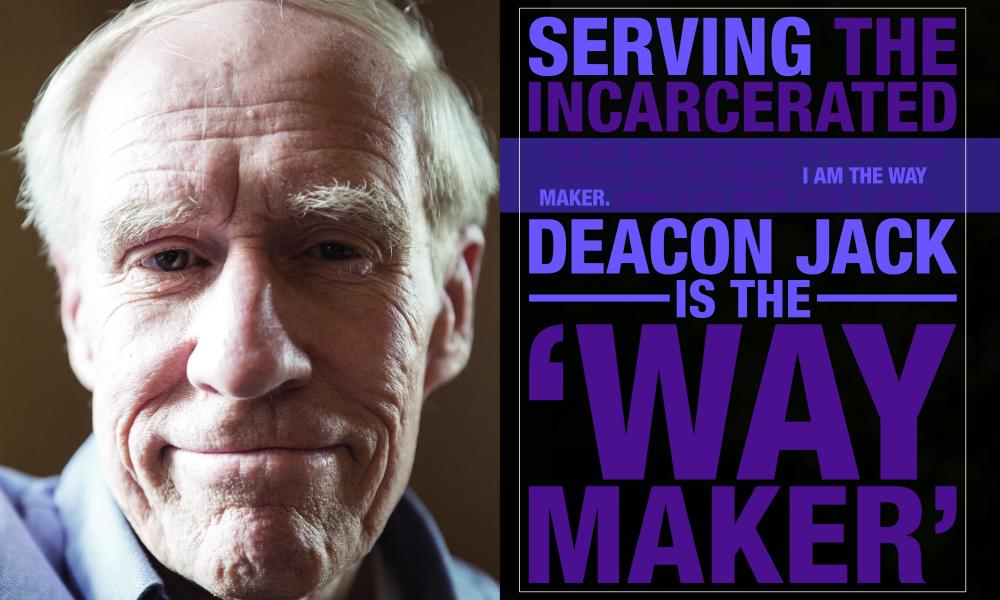 Serving the Incarcerated, Deacon Jack is the "Way Maker"

An Invitation was all it took to propel Jack Flanagan down a road he had not envisioned traveling. In the 1990s, a friend invited him to help catechize to a weekly RCIA class at the Maxey Boys Training School in Whitmore Lake. In 2001, another invitation followed to minister at the Washtenaw County Jail (WCJ), closely followed by a third to minister at the Milan Federal Correctional Institution (FCI). Now retired from AT&T, Deacon Jack Flanagan devotes approximately 23 hours a week to jail/prison ministry. Jack ruminates, “God gently prepared me step-by-step for this ministry. Beginning with my work at Maxey, I have been led. Though I was initially reluctant to serve this way, God has a way of aligning our desires with his.”

God’s desires began to manifest themselves to Jack in his 20s, when he became involved in the charismatic renewal. Later, as his sons grew, he served as a Boy Scout leader for 10 years. In 2009, he was ordained a deacon for the Diocese of Lansing. Jack ardently shares the major role family and marriage have played in his preparation for service: “Marriage and family are not just about raising kids, but about growing us up, too. We learn to love, be responsible and defer to the needs of others. A marriage vocation and its graces actually equip us for service beyond the home. God uses family to shape, form and mature us. This is God’s economy, taking the responsibilities of today to better prepare us for tomorrow.”

Jack’s tomorrows are pretty well laid out. In addition to his weekly duties as deacon of Immaculate Conception Parish in Milan, he travels four days each week to Milan FCI and puts in at least a half-day ministering. He arrives early to prepare materials before he meets individually with inmates, attends staff meetings, prays with the team and finally offers a structured curriculum in the Life Connections Program.

Life Connections is an 18-month faith-based program implemented by the federal government in an attempt to reduce recidivism by focusing on healthy re-entry into society and family life by connecting men with their faith tradition. Milan is just one of five federal prisons to offer the program. It is a starting place for many inmates, and offers classes in such areas as family life, emotional management and religious tolerance. “I often tell the guys, ‘Don’t believe all you think and feel. We may not see reality as it is; we see it as we are. There needs to be a moral compass for better decision-making because the decisions you make, make you.’” The hope is that the spiritual basis of Life Connections and the practice of virtues will inform that moral compass.

Groups in the Life Connections Program are organized individually by faith tradition, serving Muslims, Catholics, Jews, and Protestants. A fifth group, called the Values Group, consists of Native Americans, Seekers, Buddhists, pagans and marginalized Christians not aligned with any denomination; this is the group with whom Deacon Jack works. As he puts it, “This group is the most challenging to work with; there is a growing number of secularists and atheists. Most do not come with any belief in God.”

Milan FCI is only one correctional ministry for Deacon Jack. For 2½ hours every Wednesday evening, he can be found at the Washtenaw County Jail offering RCIA classes, and he meets individually with about 20 inmates. Jack proffers, “In the county jail, the men seem to be more desperate, looking for answers. Sin has a way of creating desperation in us. In a way, I see incarceration as a severe mercy God grants them to know this desperation. It provides an opportunity for them to reflect, pray and be reconciled.” Deacon Jack has assisted and witnessed close to 130 inmates join the Catholic faith over the 14 years he has served at WCJ.

While the desperation within the county jail seems to be a catalyst to openness and hope, the innate nature of the prison system leads to the more negative emotions of anger, bitterness and depression. To prevent absorbing this toxicity, Jack has two mantras: “Matthew 25:36, ‘I was in prison and you visited me’; and John 14:6, ‘I am the Way.’ One day, as I was entering the prison, I was struck with this thought: I am the Way Maker. I make a way where there is no way.

“This leads to my greatest challenge, which is simply to love. My prayer is: Lord, you love these men. Send me a measure of your love so I can love with your love. God answers this prayer often! The Scripture verses, coupled with my prayer, create in me feelings of actual affection and warmth for the inmates. It is easier for me to look them directly in the eye and see them as men whose lives are broken, rather than as felons. Their wounded brokenness evokes compassion in me. There is a saying in the prisons, ‘Don’t hug a thug,’ but I find I experience a deep connection with these men and genuinely care about them.”

Jack does not do this work alone. The framework for the teams among which he works includes a diverse ecumenical faith group of 5-9 people at the Milan FCI, and about 20 Catholics from six different parishes at the county jail. “These are people who understand that real success is measured by faithfulness, and has to be worked at day to day,” he says. These are people who understand Jack’s testimony: “Working among the prisoners keeps me desperate because it reminds me of my humble need for God in my life. This desperation has led me to daily prayer on my knees.”

God is the ultimate member of their team. Every interaction within the jail or prison walls is precipitated by prayer, both individual and with the various teams. Deacon Jack stresses emphatically that this work has taught him to trust the Lord more, knowing deeply it is the Lord who assists him and walks beside him in this work. He recalls a profound experience of this certitude: “It was early Monday morning and I was taking the 12 a.m-1 a.m. Eucharistic adoration Holy Hour. When the next person on the schedule failed to show and the third was late, I found myself, at 2:10 a.m., sitting anxiously in the chapel because I anticipated being exhausted for prison work that day. I even considered not going. Though overly tired, I got up and wearily began my drive to Milan. As soon as I turned into the prison parking lot, it was like a bucket of grace fell on me! I suddenly had an abundance of energy, confidence, even humor. I was more than ready to begin my time with the guys. I stayed energized the entire time. God came to back me up and I knew he still wanted me doing this work.”

Jack’s fervor is encapsulated in a quote he recalls: “It takes a daily miracle to keep a Christian Christian.” For Deacon Jack Flanagan, that daily miracle is encountering God in prayer, sacraments, family and the walls of the Washtenaw County Jail and the Milan Federal Correctional Institution.

The Diocese of Lansing’s restorative justice ministry, a department of Catholic Charities, is dedicated to serving those in our diocese who are incarcerated or paroled, as well as others affected by the correctional system, who seek the fellowship and wisdom of Catholic clergy and laypeople. The office seeks volunteers for this ministry, including the Prisoner Pen Pal Program. For more information on the restorative justice ministry, contact Joe Dionise at 517.342.2495 or jdionise@dioceseoflansing.org.