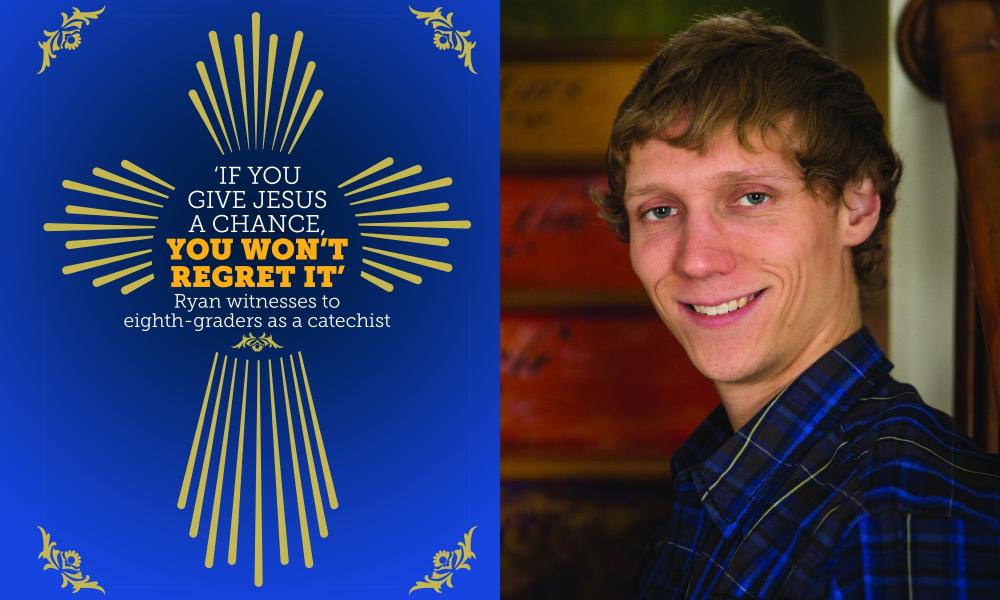 Ryan witnesses to eighth-graders as a catechist

The invitation was simple

Ryan Adelman was a freshman in high school, and one of the youth ministers at his parish, David McHugh, invited him to a youth group paintball event. Not one to typically be involved in faith-related activities, Ryan joined simply for the fun of it. Despite enjoying the evening, Ryan ignored David’s subsequent invitations to join the youth group for Sunday night gatherings – until the lure of pizza won him over. What teenage boy can refuse free pizza? That night, Ryan began to think membership wasn’t all that bad, and started attending regularly.

It took several months before Ryan’s attendance morphed into personal investment in the group. The hook was playing his guitar in the newly formed youth worship band. “That was a huge outlet for me, because music has always been a big part of my life. To me, it wasn’t about the worship songs, but that I got to play. David knew that, but he also knew he could eventually wire my passion for music toward the Lord,” says Ryan.

And that is what Ryan admits he was lacking – passion for the Lord. Despite being raised in a faith-based home with two devout Catholic parents, faith hadn’t mattered to Ryan. “I wanted nothing to do with it. I acted out in middle school and was a troublesome kid who didn’t make the best choices. I didn’t take time to pray. I didn’t know if God existed and I didn’t care. I was living very selfishly for myself,” he says. That was pre-youth-group Ryan.

The summer after joining, Ryan attended a youth retreat, and everything changed. He can pinpoint the change in him to a moment at eucharistic adoration. “I don’t, to this day, understand what was happening but it was suddenly clear God was real. Although I was in a room packed with people, God was saying, ‘Ryan I love you.’ God was reaching out to me. It was overwhelming and cool at the same time to know there is someone out there who cares about and loves me – that there is a higher purpose to this life.”

It seems it wasn’t just God who became real that summer. Ryan did as well. Prior to this conversion experience, he would don a mask to please whatever group he was with, never being his true self. But that summer, Ryan realized God doesn’t care about masks, and he didn’t need to fit in with God. God loved him simply because he is. “I went home from retreat a different person than when I arrived. From then on, I was excited to attend youth group. I joined the leadership team, helped with planning and wherever else I could. We did a lot of mission trips and work camps. Those experiences of living faith – with hands-on experience – made a huge impact on me.”

Now a student at Lansing Community College, Ryan continues to witness for his faith. He is a catechist for eighth-graders and high-schoolers at his parish, St. Thomas/St. John Student Center in East Lansing.

He says, “I hope the kids are hearing to follow the Lord. Even more basic, to know who Jesus is and what that means for them and their life. To know that Jesus is real and exists is a complete game-changer. I know it was for me, and that’s why I have shared my faith story with them.”

In spite of regularly sharing his faith and love of the Lord with youth and through his music, Ryan doesn’t consider himself a witness or evangelist … yet. “I’m working on it. I’m in training. I still have a lot of work to do but I’ve realized I can make much more of an impact if I’m in a right relationship with the Lord. By praying every day and seeking the Lord, I’m able to love people better. We all need that.” Ryan tries to impart this to his eighth-graders by beginning each session with five minutes of quiet prayer in the church. Ryan also spent a year in Glasgow, Scotland, recently, volunteering with different charities and nonprofits for an international Christian organization, the Kairos Europe/Middle East program. Again, invitation – persistent invitation – was the impetus. Ryan says: “I had a strong personal conviction God was asking me to give him a year of my life. I was ignoring it because, to be honest, I really didn’t want to take a gap year. Then I heard a youth worker’s testimony, and it seemed his message was specific to me. I still tried to ignore it, but as the year went on, more people mentioned I should do this. I told God if he wanted me, I needed proof he was 100 percent behind this. The proof came through prayer and the quick attainment of funding I would need to support myself for the year. I wouldn’t have gone if I hadn’t persistently prayed about it and been answered. “I am so glad I went. I grew in a lot of ways and really matured in my relationship with the Lord. I learned so much from the leaders of the youth I was chaperoning. I even worked on music and had the chance to record a praise and worship album with some guys who worked there, including three tracks I wrote. I have continued to write/record more music since returning home, and plan to release all these songs under my own name on iTunes, Spotify or another music provider.” His face glows as he eagerly professes, “Jesus is the best! We can’t make everyone follow Jesus, but I can personally guarantee to anyone who is struggling or doubting, if you give Jesus a chance, you won’t regret it. Take a step in faith to do what you feel you are called to do. It’s an amazing adventure!”

The four pillars of evangelization

The four pillars of evangelization are: prayer, witness, invite and accompany. Prayer forms the foundation of all our evangelization efforts. We witness by our words and by the way we live. We invite friends and family to come to Mass or to a prayer group or Bible study, and accompany people on their faith journeys.