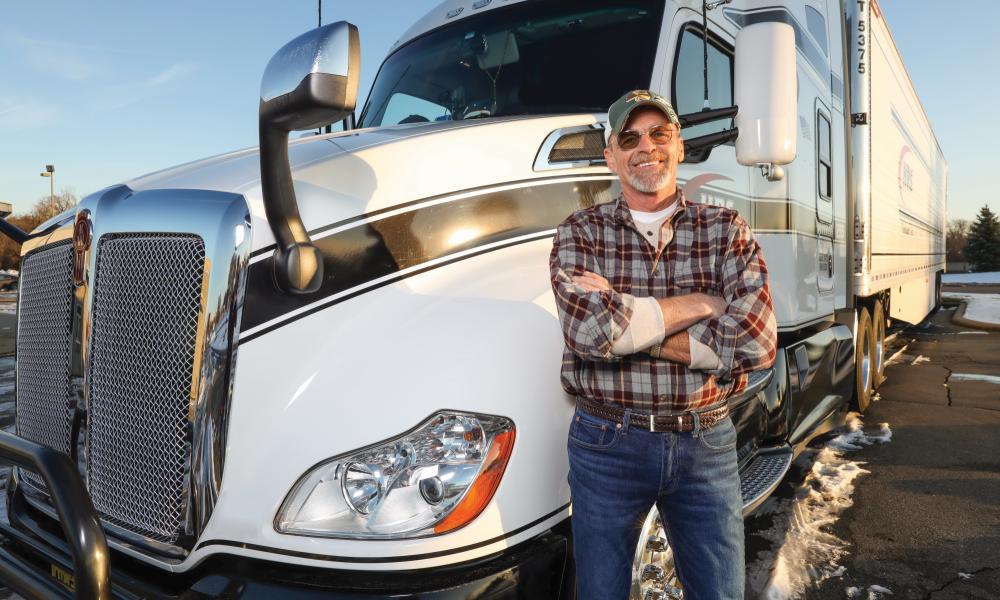 On the Road and Off, Patrick Wants Men to Accept the Challenge and Attend the Men’s Conference

With 2.5 million miles of driving a truck behind him, Patrick has more than earned his stripes. On the road and off, he is raising the call for men to “Accept the Challenge.” As recruitment captain of his parish and leader of captains in the diocese, his aim is to get as many men as he can to attend. He wants to see hundreds turn to thousands. He’s so committed to the cause, he loaded his car with five men last year just to get them there. But that wasn’t always the case. As life would have it, he ran into a few bumps along the way.

“My journey started at St. John the Evangelist in Jackson as a cradle Catholic.” says Patrick. “I went to St. John’s Catholic School, was the eldest of 10 and had two very devoted Catholic parents. I’ve made some good choices in my life, but, by far, many, bad choices. My life spun out of control with material things, sports, work and recreational drugs. Throughout the trials of life, I have been blessed with two beautiful children and nine grandchildren. It wasn’t until I hit bottom and lost everything that I found God. Through the many prayers of my mother, I went back to church. Shortly after, the bulletin had an article on ‘The Man Event,’ and hesitantly, I went.”

That’s right, he “hesitantly” attended his first men’s conference. Without the distraction of a business deal, a band, a ball or a boat, it can be difficult for men to relate or, heaven forbid, be vulnerable around each other. As Patrick learned, sometimes the biggest part of accepting the challenge is just getting over yourself. Once he did, he realized he wasn’t alone, and he hasn’t looked back since.

“At the men’s conference, everything was open,” he says. “Meeting new men, knowing that I was in the same walk of life as them and they were in the same walk of life that I was. Knowing we’re all great sinners just looking for redemption and finding the truth in Jesus. There’s so much to take away from the men’s conference, but I would say the camaraderie that you develop with other men has the most value. When you hear their testimonies and nobody judges you for what you did wrong, it’s a big plus.”

For Patrick, attending the men’s conference was the kick start he needed to begin his ministry in the Church.

“After the first men’s conference, I became a lector,” he says, “and I thought, ‘oh gosh, what did I just get myself into to get up in front of 300 people and talk? But the positive response that I got back from the church was overwhelming, and a couple of months later, they asked me to be a eucharistic minister. Just two months ago, I became a sacristan.”

As a recruiter for the men’s conference, Patrick also sees the broader strategy to mobilize men in leadership and prayer in the diocese.

“The men’s conference is set up throughout the Lansing Diocese, so we have roughly 80 to 90 parishes, so you’re getting input from men that are from geographically different areas, different churches and different classes all in the same belief. We’re all taking ideas from one another and bringing them back to our home parishes.”

Although the day is loaded with activities and resources, Patrick is most moved during worship.

“Throughout the day, you’re listening to guest speakers and you go to confession if you choose, and then they have a promotional area where vendors are. There’s all different types of organizations that have the pamphlets, books and the materials that you need to further your education or your development in a relationship with Christ, but the most memorable thing, and what I really look forward to, at the men’s conference is when we sing as a group. It’s unbelievable ... it’s beautiful.”

The 2020 Diocese of Lansing's Catholic Men's Conference is Feb. 22, 2020, from 9 a.m. to 6 p.m. at the Oosterbaan Field House in Ann Arbor, Mich. Visit www.acceptthechallenge.org for details.