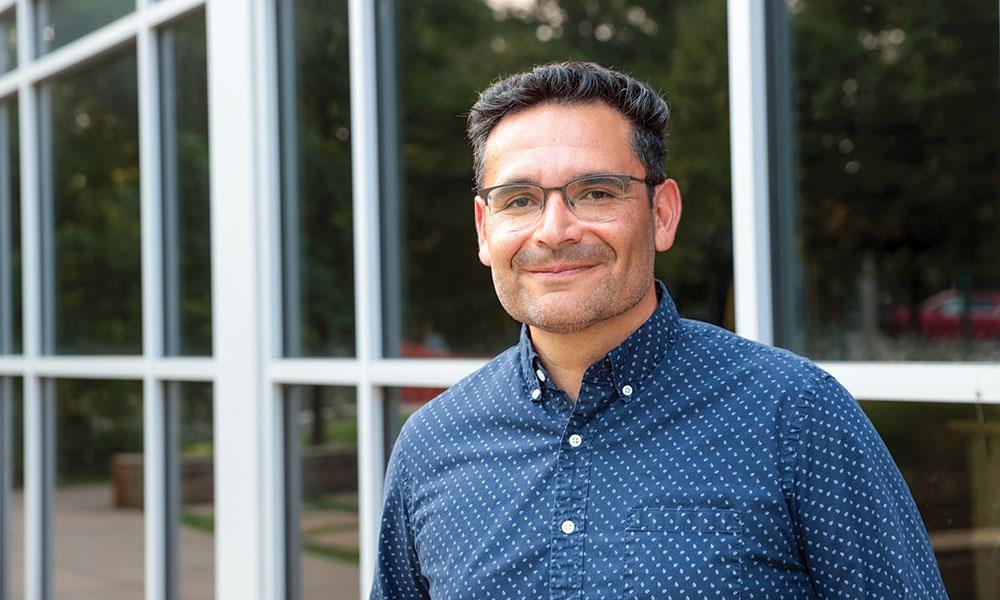 The catechism has always been a part of Edmundo Reyes’ life. Even if he didn’t appreciate it from a young age.

Attending a Catholic school growing up in Mexico City, Edmundo learned about the faith from the Marist brothers who taught him. He absorbed the knowledge – “I was a very good student,” he says – but his religion classes were just that: another class.

“My faith was either cultural – like, we would go to Mass because that’s what you do – or it was knowledge I acquired in the same way you’d learn about the sciences,” Edmundo says. “My faith wasn’t dead, but it wasn’t vibrant.”

That all changed in college, when an experience of the Holy Spirit at a charismatic prayer retreat made him rethink his relationship with God.

“Everything changed for me, but the biggest thing was that all these things I thought were just stories, all of a sudden I realized they were all true,” Edmundo says. “I realized there really is this all-powerful God who loves us, and who’s calling us to him and asking us to bring others to him.”

Fast-forward a few decades, and Edmundo has carried that conviction into his career in Catholic media and communications, including stops with St. Paul’s Outreach, The Word Among Us and the Archdiocese of Detroit.

On Sept. 7, Edmundo and a team of partners launched a new project: Real + True, a multimedia venture seeking to “unlock” the Catechism of the Catholic Church for a tech-immersed audience.

Funded in part by The Catechism Project, a global initiative spearheaded by Our Sunday Visitor, the project’s name is a reference to the “real and true God,” Edmundo says – a loving Father whose word is revealed through Scripture and the Church, and whose teachings can be discovered in the catechism.

“Real + True is a project about creating beautiful, relevant and captivating content around the catechism, so these new generations can unlock the catechism themselves,” says Edmundo, who currently works as communications director for the Archdiocese of Detroit but describes Real + True as a “passion project” apart from his job.

“We believe the catechism is not a textbook about dogma or rules, but it is actually the faithful echo of a God who reaches out to us and reveals himself to us.”

Along with co-founders Edmund Mitchell and Emily Mentock, Edmundo has spent months planning and producing video, podcast, social media and storytelling content structured around the catechism’s four pillars: the Profession of Faith, the Celebration of the Christian Mystery, Life in Christ and Christian Prayer.

Edmundo says the project was inspired in part by the BibleProject, a Portland, Oregon-based Christian media nonprofit that produces colorful, relevant content to help viewers understand the Bible.

“One day, I had three of my four children with me on the couch watching these videos on my phone, and at the end, my oldest son said to me, ‘Dad, I feel like I learned more from these videos than all my years in religious education,’” Edmundo says.

That sparked an idea to present the catechism in a similar way – with spiritual, informative, captivating and, above all, relevant content that speaks to today’s generation.

“When I think about passing on our faith, our message to the next generation, we want to do it in a way that is relevant to them, in a way that's beautiful, that matches what they're consuming,” Edmundo says. “That's very important.”

The project will include 48 “units” – 12 devoted to each pillar – covering every section of the catechism, with a new unit released every month. Each unit includes four videos: a “proclamation” to “rouse the spiritual curiosity” of the viewer, an “explanation” that breaks open the catechism’s text, a “connection” video to apply the passage to real-world scenarios and a wrap-up podcast with open, back-and-forth discussion.

While Edmundo, Emily and Edmund designed Real + True to be utilized by catechists and religious education programs, “it’s not a curriculum,” Edmundo stresses.

“This is supplemental. We hope it can be a resource for people to use to accompany a co-worker, a neighbor, your teenage daughter, in a way that’s not preachy, but answers people’s real questions,” he says.

The project’s launch is connected to the 30th anniversary of the Catechism of the Catholic Church, which was promulgated in 1992.

The Real + True team had a chance to present the project to members of the Vatican’s Dicastery for Communications and the Pontifical Council for the Promotion of the New Evangelization, Edmundo says, and received positive feedback.

“When they watched the videos, they started clapping,” Edmundo said. “I think they saw the potential for this to really move the needle away from just text-based catechesis to something that feels more connected to how people want to receive content.”

Visit realtrue.org to learn more about this project. Explore the videos and podcasts and follow R+T on social media. Content is available in English, Spanish, Portuguese and French.