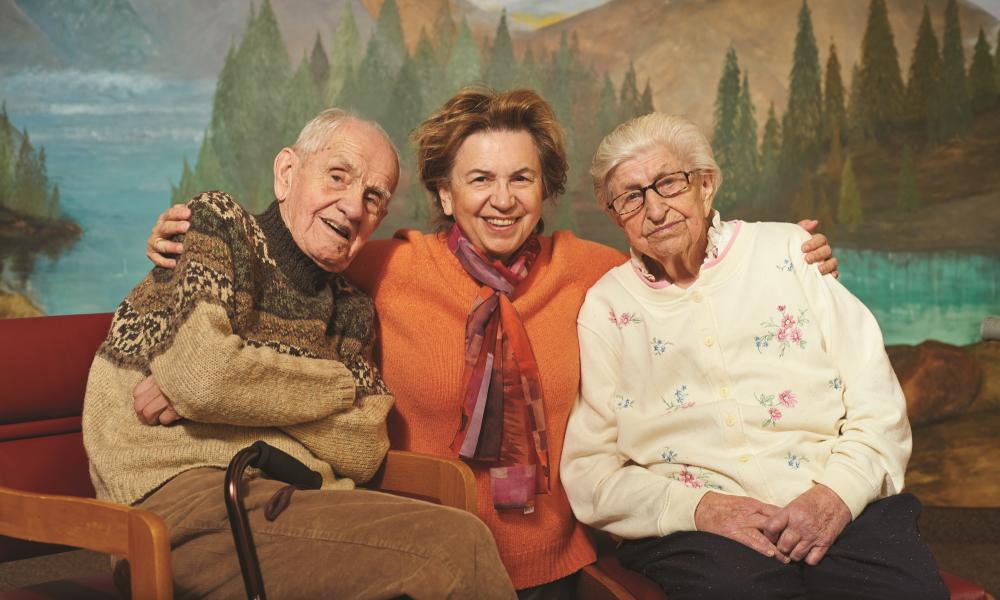 ‘Why shouldn’t I?’ Theresa’s life as her parents’ care-giver

Theresa Lingl chose not to send her elderly parents to a nursing home, and has instead moved into their home to become their primary care-giver:

For Theresa Lingl, becoming a care-giver for her elderly parents wasn’t even a question. “The decision came natural to me,” she says. “I thought, ‘Why shouldn’t I?’”

Theresa’s transition into the role of care-giver began slowly after her brother passed away. “I started visiting my parents’ house more frequently after he passed away. I was worried how they were doing with their only son dying,” she says. Since then, Theresa has moved permanently into her parents’ home to take care of them. Theresa’s mother, who is 92, suffered a fractured hip, and her father, 97, is suffering from a mental health issue.

Theresa had experience taking care of others in nursing homes and adult day care settings. Theresa explains, “I already knew what happens when you look after someone.” When checking out other options for her parents, “I thought this would be the best fit. They would do better staying in their own home,” she says.

“Part of my decision making had to be done quickly and immediately. But it was based on a journey of what I thought was important,” Theresa explains. “I’m doing this because it’s a sense of duty that I have, and I just couldn’t see any other way of doing it. Right now, I’m capable of doing it myself.”

She sees the work of God involved in her role as her parents’ care-giver. “I have a thought that when I was with God before I was even born, I said ‘I want to go down there and help this family. I can help these people.’ And God said ‘You know, it’s rough down there. But you have to remember to come back to me.’ From my perspective, from the beginning that’s what it was all about,” Theresa says. “No matter how far away the journey took us, it brought us all back together in the end.”

For Theresa, every day involves both the routine and the unexpected. She has her daily routine of dropping her dad off at adult day care, going to work and then picking him up and going home. The unexpected parts of her day usually involve her parents’ emotions. Theresa’s parents lived through World War II in Europe, which has given them an emotional burden. “For people who have been through war, the war never really ends. They have flashbacks from their home, and sadness.”

When discussing the struggles of taking care of her parents, Theresa never mentions the stress or extra work. Instead, she states that, “Part of it is going through a stage of recognizing that a time is going to come … And I don’t want that time to come. Another part of it is coming to some sense of reconciliation; reconciling the past, and coming to terms with what has happened.”

Theresa also explains that the process of becoming a care-giver for her parents included a tricky transition period. “It is a major type of rearrangement. Everyone is strong-willed. Somebody has to step back, and somebody has to step up,” she says.

As with any family struggle, Theresa is not entirely alone in her journey. Family, co-workers, neighbors and friends have performed random acts of kindness throughout her transition into care-giving. “Every little bit that somebody does is so important,” she says. Theresa also considers Livingston County Catholic Charities an essential part of her support system. Her father attends its adult day care, and the agency has provided her with referrals to other outlets to assist her.

Another aspect of Theresa’s journey is learning from her parents in their time of need. And the greatest thing they have taught her is resilience. “There is no doubt that they are going to make it,” she says. “They have survival skills.”

When looking at the situation, she sees herself honoring God to the best of her ability. “I really see this as giving back to the parent of all children. And also honoring all the past generations that have been part of the formulation of our family, and hopefully [honoring] the future generations too,” she says. “There might be a moment of kindness that’s left behind that can grow. I’m hopefully planting seeds of good things to come.

“I’ve developed a relationship with my sense of God, and with my fellow human beings, and there’s a great deal of gratitude that I have. So when it’s difficult, and when I get upset, I go over exactly what’s come down and review what I’ve done. And it’s helped me to grow even more in my spiritual growth than before. This is part of my spiritual journey.”

Other Catholic Charities agencies in the diocese are: