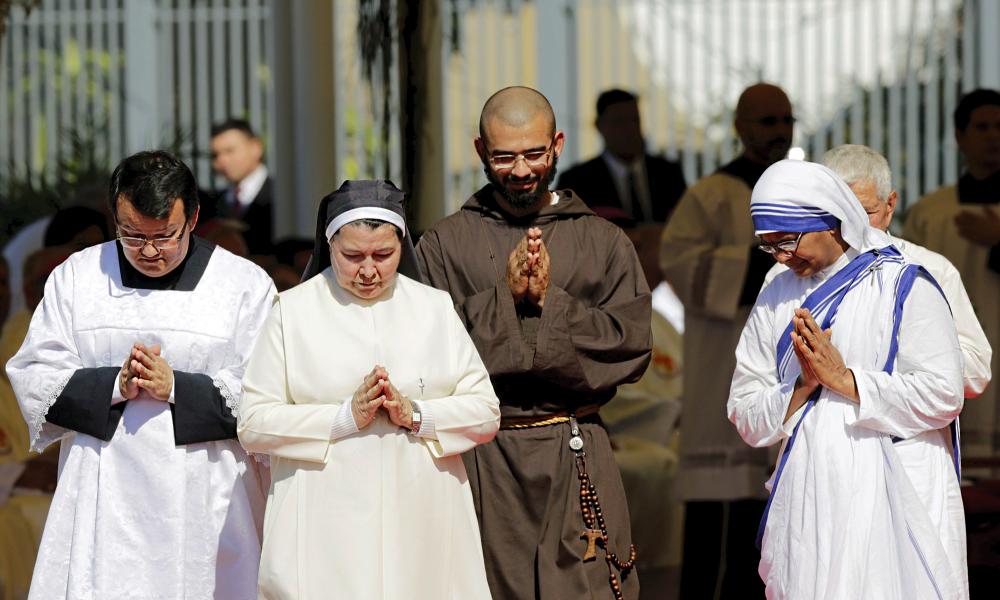 Priest, pastor, nun, brother: How are these roles different?

These questions sure made me do some research! It’s funny, but I found that there were some elements to this that I simply didn’t know. One of the first things I discovered is that there are official terms and designations and there is the way we talk – these can be two different things! Think of what happens when you want to blow your nose: you ask for a Kleenex. What you are really asking for is officially called “paper facial tissue”, but we all call it one brand of paper facial tissue: Kleenex. (Massive props to the Kleenex marketing department). This linguistic dynamic also is found in some of the terms used below. Let’s get right to it …

What is the difference between a Catholic priest and a Protestant pastor?

We’ll have to start here with a note: not all the non-Catholic definitions are so hard and fast. Catholicism is monolithic, meaning, there is a defined set of rules, theology and concepts that are “Catholic.” When it comes to “Protestant,” you are referring to a large and ideologically diverse group of people. What is true of some Protestant pastors is not true of others. With that in mind, I’ll focus on some general, but key differences.

It’s one of those situations where, no matter how I answer, it would be relatively easy for someone to point out an exception.

With that in mind, I’m going to answer in the broadest way possible.

Both Catholic priests and Protestant pastors believe themselves to be sent by God to serve his people. Their lives are all about the spiritual care of a group of believers. They offer their lives in service to God’s people by teaching; praying for, over and with them; and putting themselves a distant third behind their relationship with God and their care for a community of believers. You’ll find Catholic priests and Protestant pastors at hospitals, prisons, schools and homes, doing our best to bring God’s love and light.

If a man discerns that he is called to be a priest, he must go through a process of discernment that involves a lot of different people and a significant amount of schooling. It is never to be understood as “his call,” as much as “God’s call” and, because of that, a good number of people who are part of the body of Christ are a part of that discernment.

This time of prayer, discernment and education culminates in an ordination: a eucharistic celebration where the man’s soul is altered and he is graced with the sacrament of holy orders. After ordination, Catholics believe priests are unique in that they act in the person of Christ. The priest is given this special grace so that he can offer it to others through the wonder of the sacraments.

What’s the difference between brothers and monks?

A monk is a person who lives with other monks in community. These communities tend to be self-sufficient. They serve the Church through their prayer, meditation and offering the fruits of their time with God. A monk’s work and prayer are primarily for the world. A monk may or may not be a priest.

A brother may or may not live with other brothers, but does not (as a general rule) live in a monastery. Any food or goods that he has are a result of the generosity of others. He tends to stay within a defined geographical area and serve within it. His work and prayer are primarily in the world.

Both monks and brothers take and live vows of poverty, chastity and obedience.

What’s the difference between a sister and a nun?

A nun is a woman who lives in a monastery as a contemplative person. As a general rule, her work is for the world, not in the world. She works and prays within a monastery Most often, within her community, she will be called “Sister.”

A Catholic sister, or religious woman living an active apostolate in the world, is different. She works in the world, taking the Gospel wherever she goes. She may live in a convent or live on her own, but she lives in some form of community on a mission.

Both of these are forms of religious life, and both take take vows of poverty, chastity and obedience. Different communities vary in how these are lived out.

If you are considering religious life, you should call your diocese and ask who you can talk to about all of this – there’s way more than I can go into here!