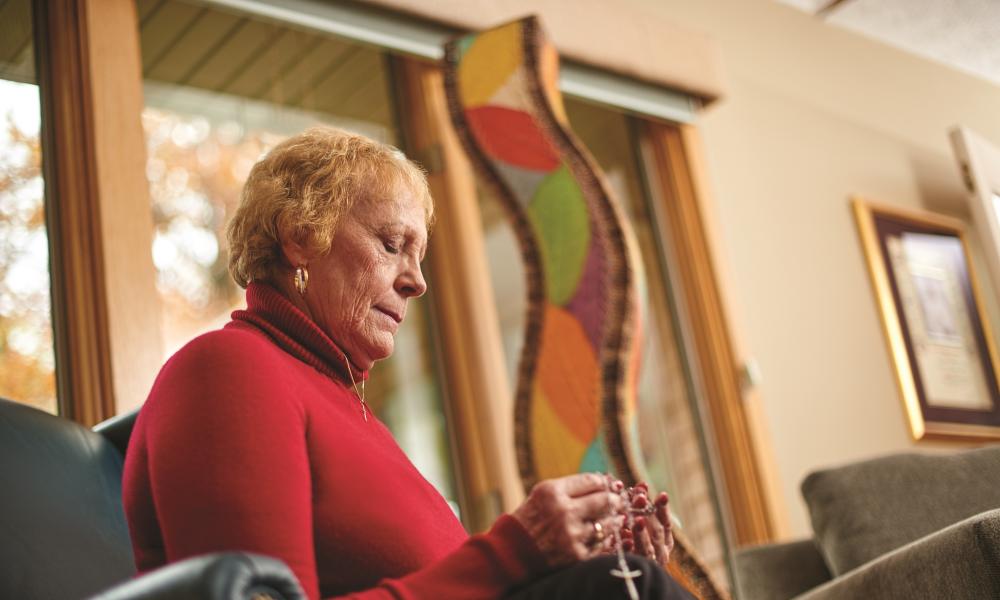 'Prayer changes us' - Ruth knows the power of prayer

“I believe in miracles. That’s all I can say.” Ruth Pline has run out of ways to describe the power of prayer in her life and her experience leading the St. Jude Prayer Group in DeWitt. “I’ve had others say, ‘Oh my Gosh, I couldn’t pray myself, but I knew others were praying.’ That knowledge gave them a lot of peace in the face of terrible circumstances. “I know how they feel. At 13 years old, our daughter, Rachelle, was riding her bike in our neighborhood when she was hit by a pick-up. The truck rolled her under its carriage, then threw her out sideways. She landed unconscious on the shoulder of the road next to her bike.

“I wasn’t home, but our neighbor ran over as soon as it happened and held her. She thought Rachelle was dying. Within minutes, another neighbor put a call out to our St. Jude Prayer Group, asking members to pray for Rachelle’s healing and protection.

“Sitting in that hospital, engulfed in grief and worry for your child, you can’t even pray. Usually, my prayers are like, ‘Listen to me, God. This is what I think!’ This time, I just didn’t have the words.

“But prayer changes us without our even knowing it. All those people on the prayer line were praying for Rachelle and our family. We were connected to them and to God’s power through them. But in asking for their prayers, we were opening ourselves to a higher power as well.

“I would imagine people pray in many ways. Some gather their families and pray, or they have a list of specific prayers they read. For me, it’s not just saying the rosary or attending Mass. Prayer has become a habit, a continuum of life. During the course of the day, I’ll think of the requests on the prayer line and ask God to hear their prayers. At any Mass I attend, I will verbalize the requests of the prayer group and will always add ‘and all the intentions on the prayer line’ to the Prayers of the Faithful. Surgeries, cancer diagnoses, drug rehab – it doesn’t matter who is asking or where they come from. It doesn’t matter how specific or how vague the request is. God knows what to do with it!

“Most of us in the prayer group know God hears us when we pray. But I want to make it very clear that it’s not about us or our prayer lives. We’re just the instruments that get it going. Some of us live outside the area. Some aren’t even Catholic. It doesn’t matter. It’s about a community coming together to invite God’s healing to come through us into the lives of those who ask for it.

“Very often, we get thank-you notes from people who say, ‘I knew people were praying,’ or ‘We made it through because we knew someone else was praying when we couldn’t.’

“In our case, Rachelle survived the accident. In fact, the doctors found that she had nothing broken but a cracked pelvis. Today, she’s a mother with four children of her own.

“But it’s important to understand that praying through the prayer line isn’t the same thing as asking for miracles. If people are open to prayers, asking for God’s help is where the healing begins. Praying to get through or for acceptance, comfort and strength is powerful.

“Handing it over to God without restrictions or instructions can be hard. But there’s a value in praying for peace with whatever comes. Think about the Our Father. Jesus taught us to pray ‘Thy will be done on earth as it is in heaven.’ That’s where prayer begins and ends.

“I don’t know how many people have been helped by the prayer line. Numbers don’t matter, because if one person needs prayer and one person is praying for them – that’s what’s important. I know, and I’m so grateful for the prayers we received in our time of greatest need. And yet, I think when you stop looking for proof that your prayer is answered ... that’s when it is answered most powerfully.”

Do you know someone who has left the Church? The first pillar of evangelization – helping to bring someone back to church – is prayer. To learn more about the four pillars of evangelization – praying, witnessing, inviting and accompanying – and to obtain your personal evangelization plan, visit www.dioceseoflansing.org/2016-assembly-highlights or contact your parish.

Visit stjudedewitt.com/prayer-line to learn more about the prayer group at St. Jude, as well as to share a prayer request.