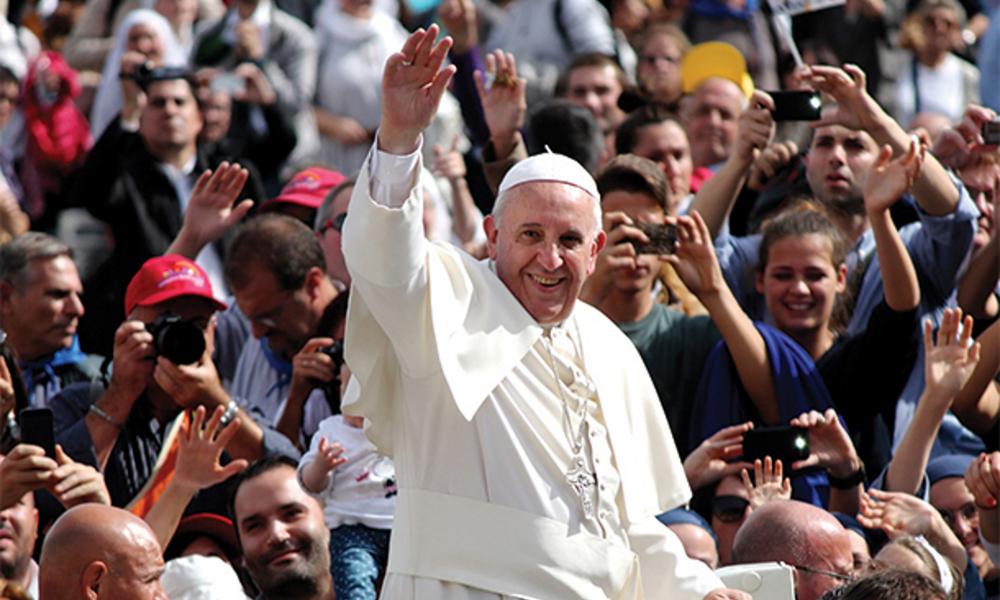 One year ago, on March 13, 2013, Proto Deacon Cardinal Jean-Louis Tauren stepped out onto the balcony of St. Peter’s Basilica to inform the world that Cardinal Jorge Mario Bergoglio, SJ, of Buenos Aires, Argentina, had become the first Pope Francis. It was the beginning of a remarkable year of “firsts.”

Pope Francis’ election marked the first time in 100 years the conclave had arrived at a consensus on only the fifth ballot. In addition to the selection of the papal name of Francis, the reigning pontiff was the first non-European pope in modern times, the first South American pope and the first Jesuit pope.

On June 29, 2013, Pope Francis promulgated his first encyclical, entitled Lumen Fidei (The Light of Faith). The encyclical was intended to complement two previous encyclicals Pope-emeritus Benedict XVI had written on the theological virtues of charity (Deus Caritas Est) and hope (Spe Salvi). In his introduction, Pope Francis acknowledged that Benedict XVI had nearly finished a first draft of an encyclical on faith, and that he had taken up the work and added “a few contributions of my own.” The encyclical reflected on the origin of faith and the road to communion with God that opens up before us.

The release of the encyclical corresponded to the Year of Faith, which began on Oct. 11, 2012, (the 50th anniversary of the opening of the Second Vatican Council and the 20th anniversary of the Catechism of the Catholic Church) and concluded on Nov. 24, 2013 (Solemnity of Christ the King). The goal of the initiative was conversion and the rediscovery of faith so that all members of the Church could become credible witnesses of truth.

Pope Francis celebrated his first World Youth Day as pope in Rio de Janeiro, Brazil, from July 23–28, 2013. The theme for the celebration was “Go and Make Disciples of all Nations” (Matthew 28:19). The final Mass of the event drew between 3.2 million and 3.7 million people, making it second only to the 1995 World Youth Day Mass with Blessed Pope John Paul II held in Manila, Philippines, where the crowd was estimated between 4 million and 5 million.

On the Solemnity of Christ the King (Nov. 24, 2013), Pope Francis brought the Year of Faith to its conclusion with the issuance of his first apostolic exhortation, Evangelii Gaudium (The Joy of the Gospel). The 200-plus page exhortation was issued primarily as a response to the XIII Ordinary General Assembly of the Synod of Bishops (Oct. 7–28, 2012) called by then Pope Benedict XVI to study the theme: “The New Evangelization for the Transmission of the Faith.” This same synod, which began the Year of Faith, had actually requested that this exhortation be written, and Pope Francis was happy to oblige.

In Evangelii Gaudium, Pope Francis did not attempt to address the “countless issues” surrounding evangelization or to “offer a definitive or complete word on every question which affects the Church and the world.” Instead, his aim was to present guidelines that he hoped would encourage the Church in a “new phase of evangelization.” Throughout his treatment of various themes, it is God’s merciful love that serves as the common foundation. God has loved each one of us first and continually seeks out every person with this message of salvation.

Pope Francis wasted little time in explaining why he had chosen the name in honor of St. Francis of Assisi. The pope indicated to journalists just three days after his election that the inspiration had come to him after the Brazilian Cardinal Cláudio Hummes had embraced and whispered to him, “Don’t forget the poor,” when it was becoming apparent he was going to be elected the bishop of Rome. “And that’s how in my heart came the name Francis of Assisi,” who cared so deeply for the poor. According to the Associated Press, he then sighed, “Oh how I would like a poor church and a church for the poor.”