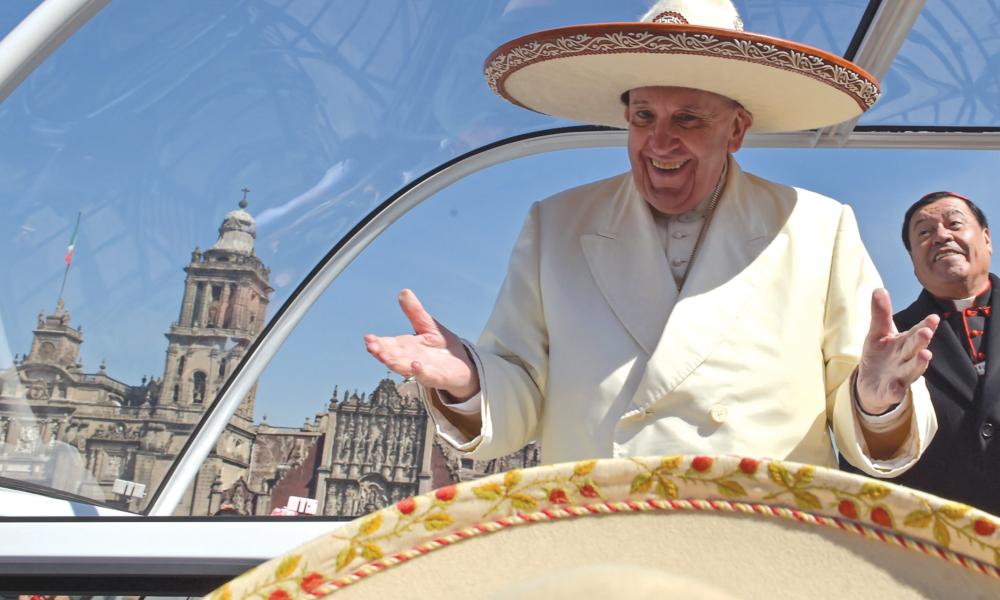 Pope Francis visited Mexico from Feb. 12–17, during which he brought a message of solidarity with the victims of drug violence, human trafficking and discrimination to some of that country's most violent and poverty-stricken regions.

The pope’s flight from Rome to Mexico City made a stopover in Havana, where he met briefly with Russian Orthodox Patriarch Kirill. With an exclamation of "Finally," Pope Francis embraced Kirill during the Feb. 12 meeting, the first between a pontiff and the head of the Russian Orthodox Church. The meeting in Havana's airport was a significant event in the 1,000-year schism that has divided Christianity.

Once in Mexico, Pope Francis engaged in a fully packed itinerary. On Saturday, Feb. 13, he participated in a welcoming ceremony at the National Palace in Mexico City, and then paid a visit to the president of the republic, Enrique Pena Nieto. He also met with civil authorities, the diplomatic corps and the bishops of Mexico, and then celebrated Mass in the Basilica of Guadalupe. On Sunday, Feb. 14, Pope Francis said Mass in Ecatepec, a suburb of Mexico City, and then returned to Mexico City to visit the Pediatric Hospital, Federico Gómez, and met with cultural representatives in the National Auditorium.

Monday, Feb. 15, the Holy Father traveled to San Cristóbal de Las Casas to celebrate Mass with the indigenous community of Chiapas, and pay a visit to the cathedral there. He then flew to Tuxtla Gutiérrez, where he met with families at the Victor Manuel Reyna Stadium.

On Tuesday, Feb. 16, he travelled to Morelia, where he celebrated Mass with priests, religious, consecrated persons and seminarians. He ended the day meeting with young people at José María Morelos y Pavón Stadium.

A visit to Ciudad Juárez filled his final day in Mexico. In Juárez, he visited the Cereso 3 prison, and met with the World of Work at the Colegio de Bachilleres dello Stato of Chihuahua. Late in the afternoon, he stood on a platform above the Rio Grande River, where thousands had gathered on both the U.S. and Mexican sides of the border, imparting his blessing on them. He also celebrated Mass at the fairgrounds in Ciudad Juárez before departing for Rome.

Significant messages from the Pope’s visit to Mexico

In his homily at the Basilica of Guadalupe, the Holy Father said, referring to the apparition of the Blessed Virgin to St. Juan Diego, “On that morning, God roused the hope of the little ones, of the suffering, of those displaced or rejected, of all who feel they have no worthy place in these lands.”

While encouraging the world to more deeply appreciate indigenous cultures and to learn to care for the environment from them, he said, "The environmental challenge that we are experiencing and its human causes affects us all and demands our response. We can no longer remain silent before one of the greatest environmental crises in world history."

In Tuxtla Gutierrez, the capital of the state of Chiapas in one of the poorest regions of Mexico, he authorized the use of native languages in the celebration of Mass. As he met with families, he said, “It is true that living in family is not always easy … I prefer a wounded family that makes daily efforts to put love into play to a society that is sick from isolationism and habitually afraid of love. I prefer a family that makes repeated efforts to begin again, to a society that is narcissistic and obsessed with luxury and comfort.”P

“You’ve asked me for a word of hope, the one I have to tell you, the one at the base of everything, is called Jesus Christ. When everything seems heavy, when it seems the world is against us, embrace your cross, embrace Jesus,” Pope Francis told a crowd of tens of thousands of mostly young Mexicans gathered in a soccer stadium in Morelia.

In Ciudad Juárez, he told the thousands massed on the international border: "Here, as in other border areas, there are thousands of immigrants … Each step, a journey laden with grave injustices: the enslaved, the imprisoned and extorted; so many of these brothers and sisters of ours are the consequence of a trade in human beings. We cannot deny the humanitarian crisis that the past few years of immigration has signified, as thousands of people migrate … This crisis that may be measured in numbers, we want to measure with names, stories and families.”

And finally, during the Mass at Ciudad Juárez, the Holy Father implored, “No more death; no more exploitation! It’s not too late for change, for a way out, a time to implore the mercy of God. In this Year of Mercy, with you here, I beg for God’s mercy.”

What the pope really said about that wall …

A great deal of attention has focused on what the Holy Father said on his return trip to Rome from Mexico, when asked about a suggestion to “build a wall” along the border between the U.S. and Mexico. Pope Francis responded, “A person, who thinks only about building walls, wherever they may be, and not building bridges, is not Christian. This is not the Gospel.”