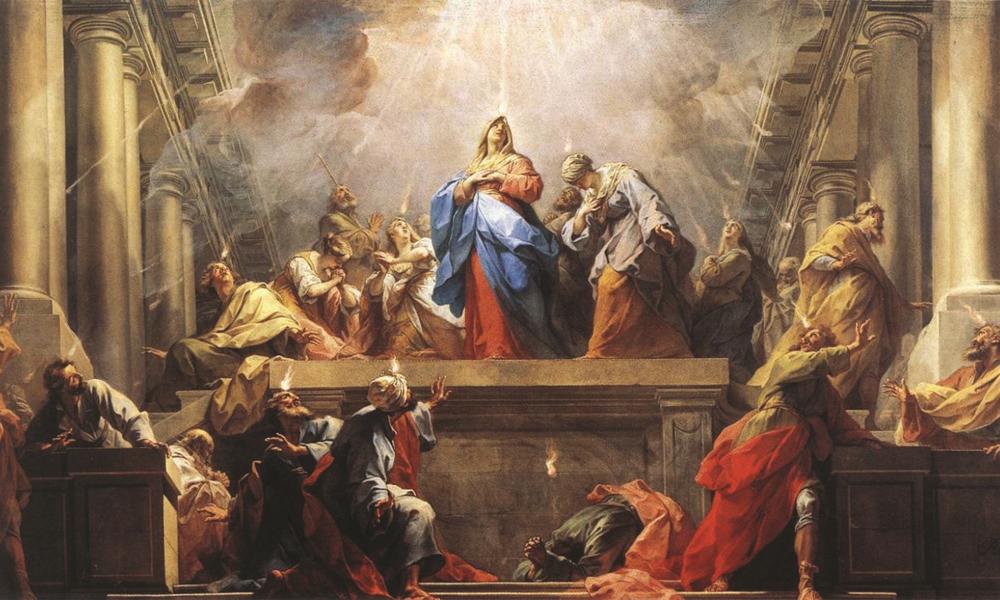 Pentecost How the Church began

The Catechism describes the Church as both the “means and the goal of God’s plan” of communion. The word itself means a convocation or assembly (Latin ecclesia, from the Greek ek-ka-lein, to “call out of”).

In the Old Testament, ekklesia designated the assembly of the Chosen People, especially on Mt. Sinai where Israel received the Ten Commandments and was established by God as a holy people. The early Christian community adopted the name because it recognized itself “as heir to that assembly.” In terms of Christian usage, the word “church” has three inseparable meanings: the liturgical assembly, the local community and the whole universal community of believers.

God, the Father, created the world for the sake of communion, a communion brought about by the “convocation” of people in Christ, or the Church. The Church then is “the goal of all things” that was prepared for in the Old Testament and instituted by Christ in his work of accomplishing the Father’s plan of salvation in the “fullness of time.”

The Church “is the reign of Christ already present in mystery.” It is a kingdom that is presented to all humanity in word, in deed, and in the presence of Christ. It is “born primarily of Christ’s total self-giving for our salvation, anticipated in the institution of the Eucharist and fulfilled on the cross.”

On Pentecost, the Church was revealed to the crowds and the work of spreading the Gospel throughout the world began. “... The Church in her very nature is missionary, sent by Christ to all the nations to make disciples of them.”

However, the Church is also ultimately a mystery – in history and visible while at the same time outside of history transcending it and invisible. Quoting the Vatican II document, Sacrosanctum concilium, the Catechism states, “The Church is essentially both human and divine, visible but endowed with invisible realities, zealous in action and dedicated to contemplation, present in the world, but as a pilgrim, so constituted that in her the human is directed toward and subordinated to the divine, the visible to the invisible, action to contemplation, and this present world to that city yet to come, the object of our quest.”

In short, the Church is the mystery of humanity’s union with God. The Church’s structure is completely ordered to the holiness of its members as its purpose is this communion with God. It therefore is like a sacrament – a sign and instrument – of communion with God and of unity among humanity. It is Christ’s instrument for the salvation of the world, the visible plan of God’s love for humanity because God “desires that the whole human race may become one People of God, form one body of Christ, and be built up into one temple of the Holy Spirit.”

The People of God

According to the Catechism, the People of God is distinguishable from all the other religious, ethnic, political and cultural groups of history. It is a “chosen race, a royal priesthood, a holy nation.” (1 Pet 2:9) Membership is gained not by physical birth, but by faith in Christ and baptism, i.e. of the Spirit and of water. Its head is Jesus Christ and the Holy Spirit flows through it.

The People of God has the dignity and freedom of the sons and daughters of God. Its law is the commandment to love as Christ loved us and its mission is to be salt of the earth and light of the world. Its destiny is “the kingdom of God which has been begun by God himself on earth and which must be further extended until it has been brought to perfection by him at the end of time.”

The People of God likewise participates in the three offices of Christ: priest, prophet and king. It bears responsibility for the mission and service that flow from these offices.