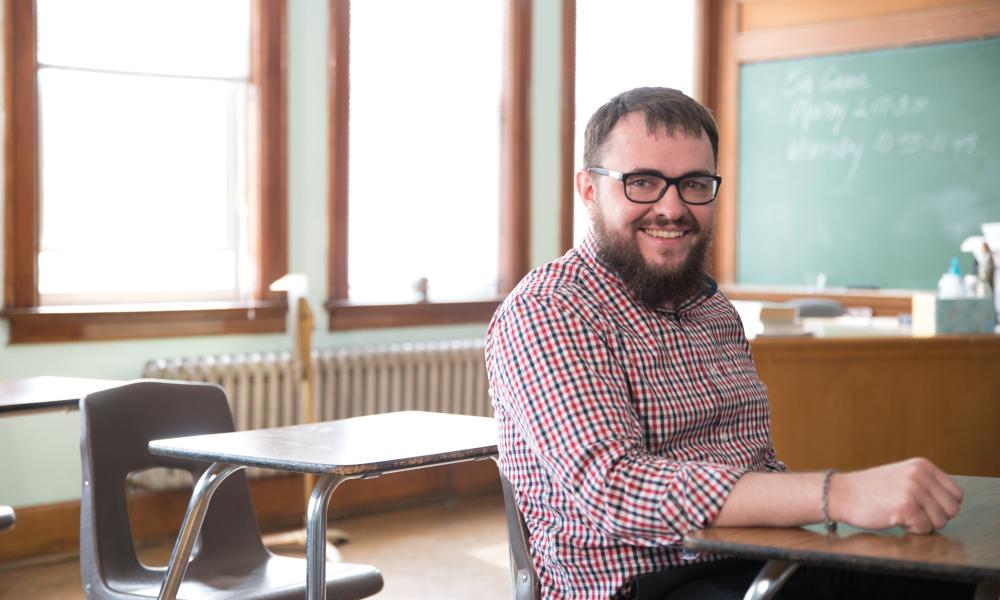 Readers met Paul Fahey in the 2008 teen issue of FAITH Magazine. Back then, Paul told us that he wanted to study theology in college and become a youth minister. Unlike some teens whose plans change as they hit campus, Paul never wavered. Today, he is the director of religious education at Most Holy Trinity Parish in Fowler.

Paul had an “aha” moment the summer after graduation when he went to his fifth Steubenville Youth Conference. “I had avoided confession on all the other conferences, but at this one, it was like the speakers were talking directly to me. The Holy Spirit put this huge call on my heart to go to confession. I did, with some fear and trembling. I walked out of the confessional 20 pounds lighter and a different person. I understood I had to do things different. This is probably when I opened myself to receive the grace I was given in confirmation years earlier,” he says. Following the conference, Paul entered Aquinas College. He recalls, “I fell in love with learning about the faith and realized I wanted to work for the Church and help students as much as I could; I quickly decided I wanted to study theology. Faith became my driving force and my relationship with Jesus grew.”

Paul graduated with his theology degree in 2012 and married Kristina. He became director of religious education (DRE) at at Most Holy Trinity in 2014. He says, “Being a part of this community has been a huge blessing. The parish community is outstanding and allowed both my wife and I, who now have four children, to grow in our faith. I have learned an incredible amount about faith from teaching it. And the students have taught me how to teach by how they grasp the lesson. I need to constantly tweak how I present something.”

Paul recently had another "aha" moment. He attended a Kerygma Encounter Retreat in May of 2017. “I left that day chewing on ideas that were both challenging and intriguing. I had a lot to ponder,” he says.

Kerygma Encounter is a one-day retreat designed for catechists and DREs; it is one component of their catechist formation. The day features four main talks focusing on the heart of faith: Who is God?; Who is Man?; Why Jesus?; and union with God. The focus of each session is to help those in catechetical roles understand God made humans to be in relationship with him and actually share in God’s divine nature. Each talk is followed by silent prayer and time to seek answers to questions that surfaced.

For Paul, the question was about the concept of our sharing in God’s divine nature. It "wasn’t part of my catechetical experience. This was a new and shocking idea. God became man so we might become God? That teaching was more than scandalous to me. The retreat gave me the opportunity to break this concept open, pray about it and ask as many questions as I needed. I realized God wants more than relationship. He wants us to partake in his very nature. We are being remade through grace to participate in God’s divinity.

“I’d never heard these ideas presented in such a systematic, cohesive way. It really ties everything together and deepens the meaning of our beliefs, like how the sacraments are ways God gives us himself to remake us into his image. Or how living the moral law becomes possible, even easy, the more we allow Christ to remake us into his image. And the purpose of prayer is for God to transform us into his image. I realized all these concepts are tied to specific things I teach. I studied theology in college and had been teaching awhile, so there was a moment of humility when I thought, ‘How did I not know this? How did I miss this?’”

After leaving the encounter, Paul basically scrapped his prepared lesson for an upcoming confirmation class in order to incorporate what was shared at the retreat. He continues: “Confirmation doesn’t make sense by itself. It’s when God sends the Holy Spirit to remake us so we can become like him on earth. This is what confirmation is all about.

“The Kerygma Encounter has made me more passionate about what I teach because it adds a layer of depth and meaning that wasn’t there before. Maybe it was there but not as explicit. It’s reoriented how I teach, how I understand.” Paul is hopeful that his students’ understanding of faith will click sooner than his did. Paul was confirmed around the eighth grade and active in youth group, but it wasn’t until after his senior year in high school that he began to grasp what faith was all about.

“When I first started learning about my faith, I had a lot of apologetic zeal about being right. I realize how judgmental I used to be; life has taught me to be more empathetic. I love Pope Francis and his explanation that the Church is a field hospital and we are to be about loving people and bringing them the mercy of Christ.

“My faith brings me a deep sense of peace despite the chaos of the world. Faith is something you can root yourself in to experience a joy and happiness not found in the secular world, where joy and happiness are shallow; with God it is deeper. Maximilian Kolbe, my favorite saint, modeled this. As a prisoner of Auschwitz, he lived the worst the world can give and yet, by all accounts, he was a person of peace.”

The Kerygma Encounter centered Paul's faith, “The encounter has helped me understand it’s not by my effort that I become holy but rather by leaning more and more into my relationship with Christ and the sacraments that God makes me holy.”

FAITH asked Tim Carpenter, director of religious education for the diocese, about how catechists and parents can work together to educate our children in the faith.

Catechesis needs to be an experience. It needs to be great content presented in a beautiful way. The content itself is beautiful, so the method in which it’s conveyed needs to be beautiful so that it addresses the human heart, the human soul.

Parents are laying the foundation. And that is not an intellectual foundation. It is that God exists and that you can trust him. Essentially that’s what parents are going to model.

At home, we model it by talking about God as if he’s a real person. We talk about God in a way that shows we trust him. We put on display our trust in God’s providence that he is orchestrating something and we’re a part of it.

Pray with your kids on a regular basis. And then be ready to answer questions. Tell them you don’t know. Look up answers. Send them to people who do know. If parents do that with their kids and they send them to religious education, the catechist will be able to be successful.