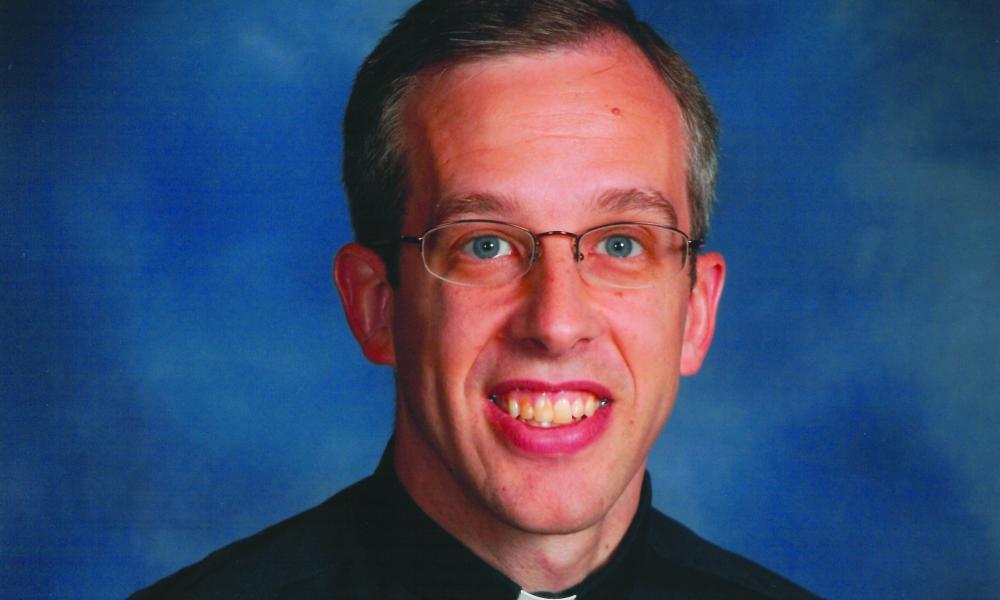 Parish more than doubles its goal

Following a sports game, it’s not uncommon for athletes to celebrate their victory by showering a coach with water or Gatorade.

In the same congratulatory spirit, Father Eric Weber, pastor of St. Mary Parish in Westphalia, was doused with water June 7 to applaud the parish’s success with the diocesan-wide Witness to Hope campaign. The campaign raises funds for individual parishes and for diocesan initiatives.

“Father Eric is what I would call an absolute rock star. He made (the campaign) a priority, and when pastors make it a priority, it’s bound to be successful,” says Greater Mission Campaign Director Joseph Citro, who was assigned to St. Mary’s to assist behind the scenes. “The pastors are the face of this.”

Greater Mission is a Catholic development services firm that has been contracted by the Diocese of Lansing to assist in conducting Witness to Hope. Greater Mission has presented to each parish a prayerful, confidential and uplifting way for people to make a sacrificial gift based on a Decision of Faith. Like all important endeavors, Witness to Hope does take time and effort on the part of parish leadership, but this effort is fully supported by the professional and faith-filled campaign directors who provide expert help.

St. Mary launched its campaign in January with three goals: add a cafeteria to the parish school and expand the kitchen; refresh the parish hall; and develop a rainy day fund for substantial repairs, such as a roof. The Parish Council, Finance Council and staff worked together to discuss St. Mary’s future, and the Witness to Hope campaign gave them the jump-start they needed to reach for their goals.

“Strong parishes make for a strong diocese, so I think that really increased the enthusiasm for me and the parish,” Father Eric says.

And increase the enthusiasm it did. With 54 percent participation, St. Mary’s more than doubled its $937,756 goal. In fact, by June 6, the parish had raised more than $2.1 million. The average parish participation rate is 38 percent, according to Joseph.

“We’re really grateful to the bishop for structuring the campaign in this way, because it allows the parish to do a lot of projects,” Father Eric says.

Father Eric began by meeting with 46 individuals and couples for anywhere from 30 minutes to an hour to discuss the parish needs. Joseph explains that meeting with families who can potentially contribute a significant portion of the parish’s goal moves the campaign in the right direction – and getting people to attend a meeting is the first step in the campaign’s playbook.

“We have a plan, and when pastors stick to that plan and make the time, it’s going to be successful. It’s just proven,” Joseph says.

When addressing the needs of the church, Father Eric says they focused on the history of St. Mary’s, showcasing an aerial photograph of the campus from the 1960s to demonstrate what projects have been completed over the years.

The parish’s Steering Committee, which is comprised of lay leaders who represent different parts of the church, played a vital role in educating the parishioners. Co-chairs Bill Hengesbach and Cindy Fedewa and members Steve Thelen, Linda Lunda, Dean Kohagen, Donna Wirth, Brian Kowatch, Katie Pung, Darron Birchmeier and Janay Bengal were crucial to the campaign, according to Father Eric.

Greater Mission supplied the committee with resources to answer the community’s questions, and they were walked through what the parish and the diocese were looking to accomplish. The committee also decided to create a FAQs document – tailored to St. Mary – separate from the diocese’s FAQs. The parish then held 10 open houses and made the presentation available online for those who could not attend a session.

In addition to the generosity of the parishioners, Father Eric says having a successful campaign came down to the time invested.

“It’s hard to prioritize this, and if you want it to work, it’s like everything else — you have to put in the time and energy,” he says. “I’d love to really convey my gratitude to the parish for their generosity. It’s another way of them showing how much they value their faith and the parish that they were so willing to contribute.” Cari Ann DeLamielleure-Scott