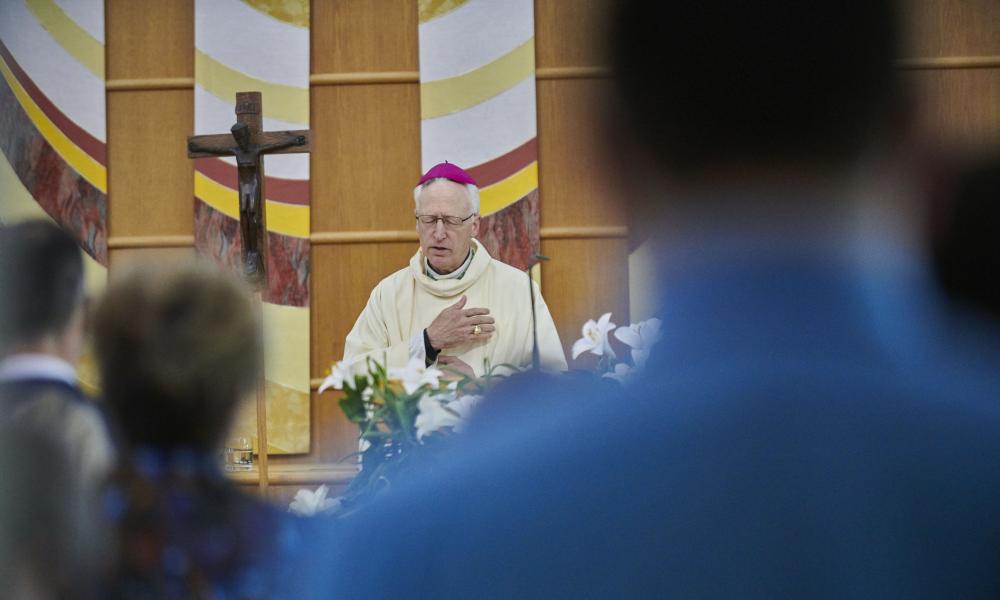 As I write this column, we are in the midst of another unjustified death of a black man at the hands of a law enforcement officer. This sad and demoralizing action has again raised before our eyes the specter of racism, an attitude that denies or ignores the fact that we are all brothers and sisters, made in the image of Almighty God. When this moves beyond unconscious attitudes to deliberate actions, then we have committed serious sin, as St. John tells us: “Everyone who hates his brother is a murderer, and you know that no murderer has eternal life remaining in him.” (1 Jn 3:15)

Back in 2018, we bishops noted: “We read the headlines that report the killing of unarmed African Americans by law enforcement officials.” (Open Wide Our Hearts, a pastoral letter against racism) As long as human beings exist, we know that such sin will continue. But we do not need to be part of it. The bishops’ letter urged three actions: do justice, love goodness and walk humbly with God. (see Mi 6:8)

To do justice requires that we recognize the rights belonging to every human life because these rights flow from God. We bishops have hammered away at the right to life of the unborn, and justifiably so. But those rights do not end when a human being is born.  We must be pro-life from conception to natural death for everyone. Justice requires that we be in a right relationship with God, with all our neighbors and with creation itself.  One major factor which often prevents maintaining such a right relationship with others is our lack of dialogue, of listening to each other’s stories and often the pain contained in those stories. This lack has led through our history to mistreatment of Native Americans, Hispanics, other ethnic groups and religious groups – and we Catholics were often on the receiving end of such behavior.

But our historical treatment of African Americans has been much more complicated than these other behaviors as it was tied to slavery, to Jim Crow laws, to separate but equal statutes and other racist structures. Many of these actions have endured into our own lifetimes. It takes a more intentional, concerted effort on all our parts to act against certain ingrained instincts in ourselves and in our society.

To love goodness is to carry out this intentional and concerted effort every day.  This means we daily practice loving our neighbor as ourselves. Love is at the core of what needs to take hold of our hearts. Father Augustus Tolton, an African-American priest whom we are praying will soon be named a saint, showed deep love in service of others. We can do no less.

Finally, to walk humbly with God, we know that any change in us is a work of grace for which we must pray and to which we must be open. We need to recognize our own sinfulness, repent of it and seek God’s forgiveness and healing, which is most generously offered us. Such walking is both with God and with others. We need to encounter those who are often out of our sight-lines and value them. All this entails conversion, a change of heart. So, let each of us do our best to open wide our hearts.

Bishop Boyea declared six Fridays in June and the beginning of July as days of prayer and fasting in order to seek peace, justice and reconciliation for all the people of the United States. These six days lead up to the anniversary of the death of Venerable Augustus Tolton, on July 9. Venerable Augustus Tolton was a former slave who became the first black priest in the United States in 1886.