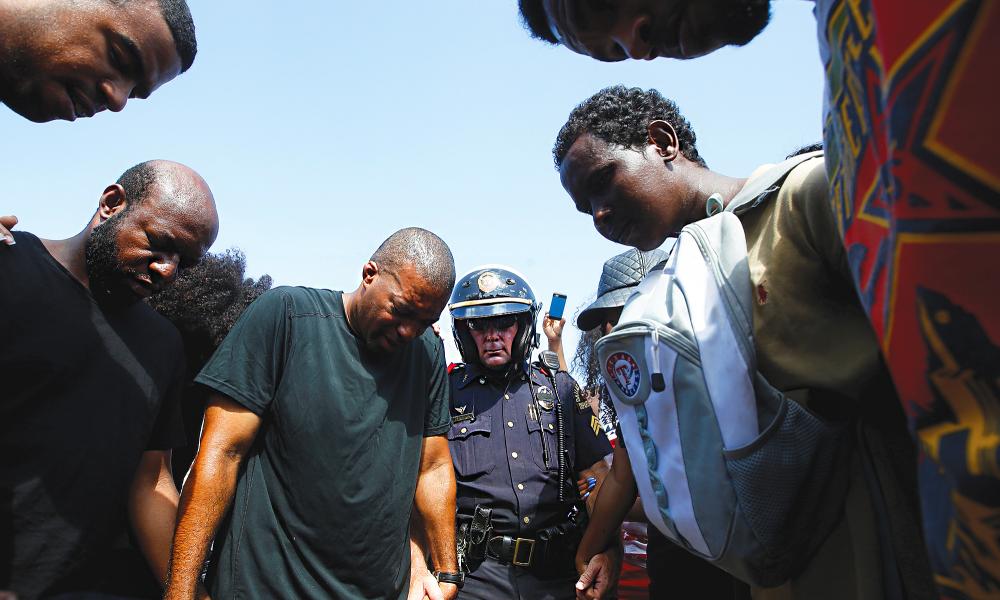 ‘Only love can break the cycle of violence’ Bishops respond to violence in the U.S.

Over the course of the past few months, the news has been filled with stories about violence – from the mass shooting at an Orlando nightclub, to the killing of two men by police in Louisiana and Minnesota, and the subsequent murder of police officers in the line of duty.

Racial tension has escalated, and protestors have taken to the streets with the Black Lives Matter movement.

In response, Catholic bishops throughout the country have issued statements condemning the latest gun violence plaguing our nation and calling for its end, as well as the elimination of racial intolerance and bigotry, while expressing gratitude for the bravery and support of law enforcement.

“Only love can break the cycle of violence,” Bishop Mark Seitz of El Paso said, and Bishop John E. Stowe of Lexington, Kentucky, prayed, “May God grant us true peace rooted in justice.”

The bishops have consistently decried division among racial and cultural groups. Archbishop Joseph E. Kurtz of Louisville, Kentucky, President of the U.S. Conference of Catholic Bishops (USCCB), delivered a statement on race relations in St. Louis on June 10, 2015, less than a year after the unrest in Ferguson, Missouri. At that time, Archbishop Kurtz said, in part:

“In every instance, our prayer for every community is that of our Lord in Saint John’s Gospel, ‘that they all may be one.’

…Here we are in St. Louis where, in 1947, Cardinal Joseph Ritter, who died 48 years ago today, integrated Catholic schools well before the 1954 Supreme Court decision in Brown v. Board of Education. It shows that the Catholic Church can be at the forefront of promoting justice in racial tensions. It is time for us to do it again. I suggest five concrete ways in which the Catholic community can commit to ending racism and promoting peace, justice and respect for all persons:

“The death of two black men at the hands of police in Baton Rouge and Minnesota this week is a grave source of concern and a tragedy compounding a long and bitter pattern of similar racially-related tragedies. These incomprehensible incidents aggravate racial resentments and make a tense national situation worse. To the credit of the Philadelphia community, protests here have been peaceful and marked by cooperation between police and crowds expressing their frustration. We should all pray that this kind of mature common sense continues.

At the same time, attacks on police under any circumstances are an outrage and an act of violence against the entire multiracial community. The police officers killed in Dallas had no connection to the situations in Baton Rouge and Minnesota. They were on duty to secure the safety of the innocent public – the whole public – and their murder can only discredit the legitimate anger of many of the protesters. Violence is not an answer, and the killings in Baton Rouge, Minnesota and Dallas have proven that by deepening the divides in our national life. Black lives matter because all lives matter – beginning with the poor and marginalized, but including the men and women of all races who put their lives on the line to protect the whole community.”

“We have been swept up in the escalating cycle of violence that has now touched us intimately as it has others throughout our country and the world. All lives matter: black, white, Muslim, Christian, Hindu. We are all children of God, and all human life is precious.

We cannot lose respect for each other, and we call upon all of our civic leaders to speak to one another and work together to come to a sensible resolution to this escalating violence. Let us implore God our heavenly father to touch the minds and hearts of all people to work together for peace and understanding.

We pray for consolation and healing for both the families and those killed and wounded. We are reminded of the ever-present danger to those who are dedicated to protecting us.”

“The assassination of Dallas police officers last night was an act of unjustifiable evil. To all people of good will, let us beg for the strength to resist the hatred that blinds us to our common humanity. To my brothers and sisters in Christ, let us gather at the Cross of Jesus. Our Savior suffered at the hands of humanity’s worst impulses, but He did not lose hope in us or in His heavenly father. Love overcomes evil.

The police are not a faceless enemy. They are sons and daughters offering their lives to protect their brothers and sisters. Jesus reminds us, “no one has greater love than this, to lay down one’s life for one’s friends” (Jn 15:13). So too, the suspects in crimes or routine traffic stops are not just a faceless threat. They are members of our family in need of assistance, protection and fairness. When compassion does not drive our response to the suffering of either, we have failed one another.

The need to place ever greater value on the life and dignity of all persons, regardless of their station in life, calls us to a moment of national reflection. In the days ahead, we will look toward additional ways of nurturing an open, honest and civil dialogue on issues of race relations, restorative justice, mental health, economic opportunity, and addressing the question of pervasive gun violence.

Let us pray for the comfort of everyone affected and that our national conversation will bear the good fruit of healing and peace.”

“This week in our community, as in our nation, and as in our world, we find ourselves facing the many emotions that accompany acts of violence. We experience sadness, anger, frustration, and fear. To all these, our Lord invites us to renew our trust in his promise of fidelity, to increase our prayer, and to renew our commitment to peace and mercy toward one another.

Truly, we are all called to be ministers of healing to a hurting world. May fear not lead us into despair. May anger not move us to inflict pain upon others. Rather, moved by the grace of Christ’s suffering for us, may we in turn impart that grace to one another.”

“As people of faith, we turn to the Lord in challenging times, seeking not only his consolation and healing but also his wisdom and guidance. In the midst of anger, fear and frustration, we need to come together as God’s family to pray that God’s grace might unite all people of good will and bring light into the darkness of this difficult time.”

“In the face of violence we turn to the Prince of Peace. Implore his mercy for healing of our wounds and the triumph of peace #PrayForDallas.”

“We live in a culture permeated by violence. Unite your prayers and suffering to Christ in reparation for sin.”

“Gun violence is not a problem for someone in another state, or another town. It affects EVERYONE - even right here in #Dallas.”