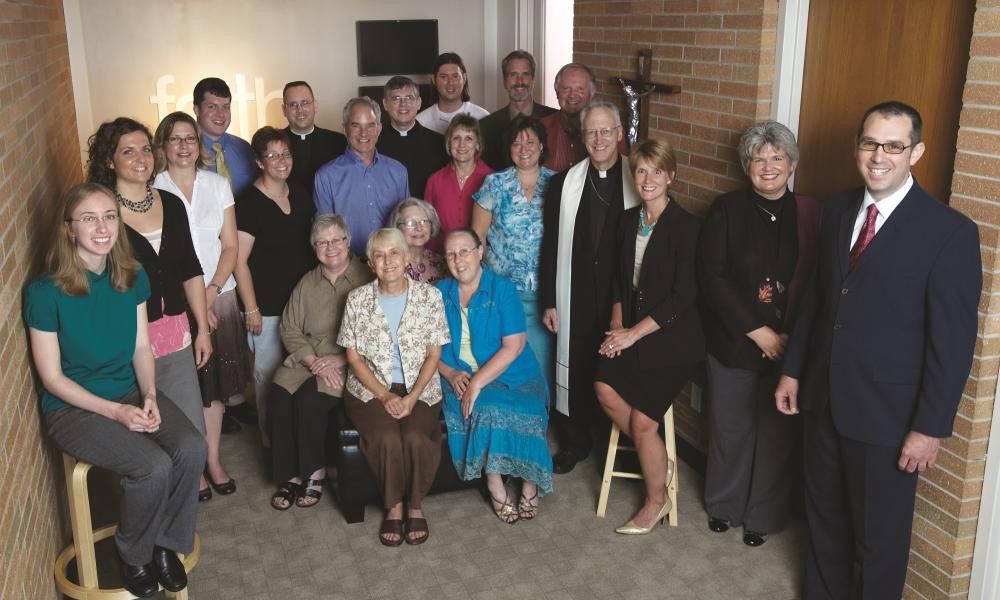 From one magazine to America’s fastest-growing Catholic publisher

The story of FAITH Catholic

My first day of work at FAITH Magazine sticks in my mind. The receptionist directed me to an empty office – well, not quite empty. On the floor in the corner sat a phone on a phone book and in the center was a lonely steel desk with a bent leg. This was day one for FAITH’s first employee. I have to admit, a moment of fear set in. Yet, it was also exciting. In a few minutes, my boss, Father Charlie Irvin, would arrive. In a few weeks, more staff would be hired. In six months, the first issue would launch. Now, 10 years later, you have in your hands issue 100.

What a 10 years it has been. I hope we’ve made FAITH enjoyable for you. It’s difficult to reach people with a magazine in the age of the Internet. Yet, we were on to something. Bishops from across the country took note and FAITH grew. In July 2009, Bishop Boyea merged FAITH Magazine, diocesan communications and Liturgical Commission Publishings into FAITH Catholic. Together, we are one of America’s largest and fastest-growing Catholic publishers.

Back then, FAITH was one magazine, 10 issues a year. Now, FAITH Catholic publishes 18 magazines, 139 issues a year. Back then, we went to 80,000 homes. Now we reach nearly 1 million. Our commentaries and homilies are used by roughly one third of the nation’s 19,000 parishes. Plus, FAITH Catholic is venturing into TV production, books, marketing and the new era of digital magazines, databases and interactive Web products.

It is said that success has many fathers and failure is an orphan. Well, the fathers of FAITH are many. Father J. Munley first suggested that there be a magazine for the diocese and I went to work on a concept. Father Dwight Ezop, a seminarian at the time, gave input. Father Charlie Irvin was named editor and made the pitch to wary priests. Deacon David Rosenberg created a Web site. Msgr. Michael Murphy found a way to fund the first year. Bishop Carl Mengeling had the courage and vision to make it all a reality.

A new generation makes FAITH possible today. Elizabeth Solsburg is not only the driving force behind the Lansing edition, but works with our client editors across the country. Patrick Dally not only designs the magazine for Lansing, but works with three other designers to produce 139 issues a year for Catholic dioceses and organizations.

The passing on of faith falls to each generation. This is our time. Ironically, despite all the many means of communication, it seems harder than ever for the message of Christ to cut through. For print media, times are very tough. Will FAITH continue to grow? Looking to the future, it would be easy for a moment of fear to set in. I suppose we would all do well to remember our roots. Two thousand years ago, the Twelve Apostles could not see what would become of the church, yet look what happened. Closer to home, Father Charlie and Bishop Mengeling could not see what their new magazine would become, yet look what happened.

I guess what they all had in common was a little faith.