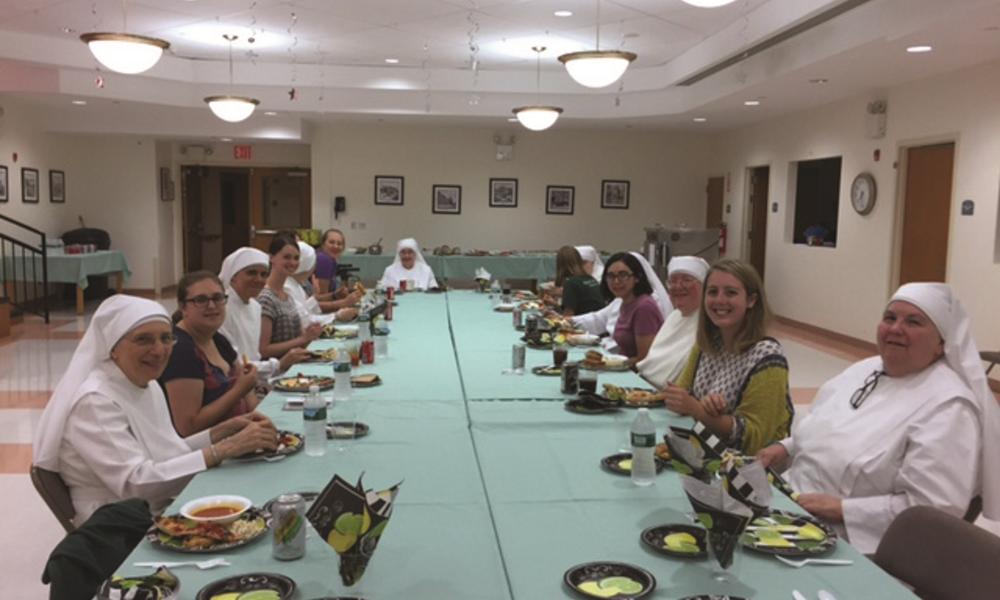 In August, seven women from the Diocese of Lansing accompanied Dawn Hausmann, director of consecrated vocations, on a Nun Run to New York City. As part of their discernment process, the women visited six religious communities, served in soup kitchens and listened to talks about the orders. Below is Mandy Pohl’s reflection of her experience.

Approaching and during the Nun Run, I have had an open heart. While dialoging with the Lord, many times I told him, “I feel called to the vocation of consecrated virginity, but if you call me to a religious order, then I will join.” For several years, I felt such a strong spousal relationship with the Lord. I was immensely excited to visit the Servants of the Lord and the Virgin of Matara because I felt drawn to their order when I was with them for World Youth Day in Rio de Janiero. I felt at home with them. Therefore, I was curious what would happen if I saw them again. I repeatedly conversed with the Lord asking, “Lord, are you going to call me to join them?” He never replied. Further, he never gave me consolation about visiting them until the Nun Run. I was looking forward to seeing what he had planned.

On Thursday, we visited the Capuchin Sisters of Nazareth. Their order was beautiful, and I was attracted to the Franciscan way of life. But I felt so desolate at the thought of joining the order. When conversing with them, they mentioned their interaction with the youth was occasional. I instantly knew I could not thrive in an order that did not interact with children on a daily basis. While leaving their order to drive to NYC, a couple of the woman expressed their desire to visit the order again. Jennie, God willing, plans to attend their Come and See Retreat in September.

As I knelt in the back of St. Rita’s Church, the church near the Missionaries of Charity’s Convent in the Bronx, I began dialoguing with the Lord about my experiences and the movements of the Spirit I was feeling from visiting the religious orders. Then I flat out asked, “Where are you calling me?” I heard, “Marriage.” I felt instant peace described best by Philippians 4:7 “Then the peace that surpasses all understanding will guard your heart and mind in Christ Jesus.” Even though I received extraordinary peace, the revelation was a curveball. I was blissfully in shock. I took a deep breath and said, “Lord, if this is your will, then let it be done unto me according to thy word.”

Then a MC sister handed me a candle.  Confused, I looked up at her, and she told me, “Light the candle on the altar before the Blessed Sacrament for a petition.” As I lit the candle, as if I needed clarity, I asked him to reveal my vocation. I was thinking, “Well, all the vocations involve a marriage of some kind. Consecrated life is a marriage to the Lord, and matrimony is marriage to a man as a sign of the ultimate reality in heaven.” Then I sat down near a statue that I was struck by when I first entered the church. Something just drew me to her, and I did not know why. As I prayed, I felt the Lord asking me to turn around. Finally, I did. The very first thing I saw was a stain glass window with the words, “Matrimony,” and I heard, “The two shall become one flesh.” I felt the peace from Philippians 4:7 rush over and consume me. I did not anticipate this revelation on the Nun Run.

Saturday, we visited the Franciscan Sisters of the Renewal and the cloistered branch of the Servants of the Lord and the Virgin of Matara. While visiting the Franciscan Sisters of the Renewal, we worked alongside the sisters in the soup kitchen. Dawn and the rest of the woman on the Nun Run were glowing throughout our visit, especially while serving in the soup kitchen. For me, the highlight of the visit was assisting Mother Guadalupe bring water and food to the homeless men on the block. I felt complete going out of my comforted zone, setting my shyness aside, and serving people in need. Karoline was especially struck by the Franciscan Sisters of the Renewal. During our drive across the city, Karoline admitted she wants to visit them again. She felt drawn to way the sisters felt like a family and their apostolate, which focused on serving the poor.

Our drive home from NYC on Sunday provided a wonderful opportunity for us to reflect on the movements of the Spirit. I was inspired by Laura’s openness to joining a cloistered convent. She admitted the thought freaks her out because she would never return home to her family. However, she is keeping her heart open to the vocation because she knows God ultimately knows where she will have the fullest life, and at this point in her discernment, he has not closed the door to a cloistered convent. Though, to her surprise, she feels compelled to discern and hopefully visit the Missionaries of Charity in Detroit. Before the Nun Run, Monica felt called to join the Franciscan Sisters of the Third Order Regular of Penance of the Sorrowful Mother, and the Lord used the Nun Run to reassure her that he is calling her to join their order. I am intrigued to see what the Lord does with each woman’s interest and openness to, not only the religious orders, but also the vocation of religious life.

Reflecting on all the religious orders we visited, I was struck by the beauty of each, and the need for more women joining their orders. Our nation has a significant poverty issue both financial and spiritual, and there is a need for more women answering a call to be Christ to the needy. I am clear evidence the Lord does not call every willing woman to join a religious order. But he does use the discernment process to draw you deeper into his heart and reveal the vocation he called you to from the beginning.