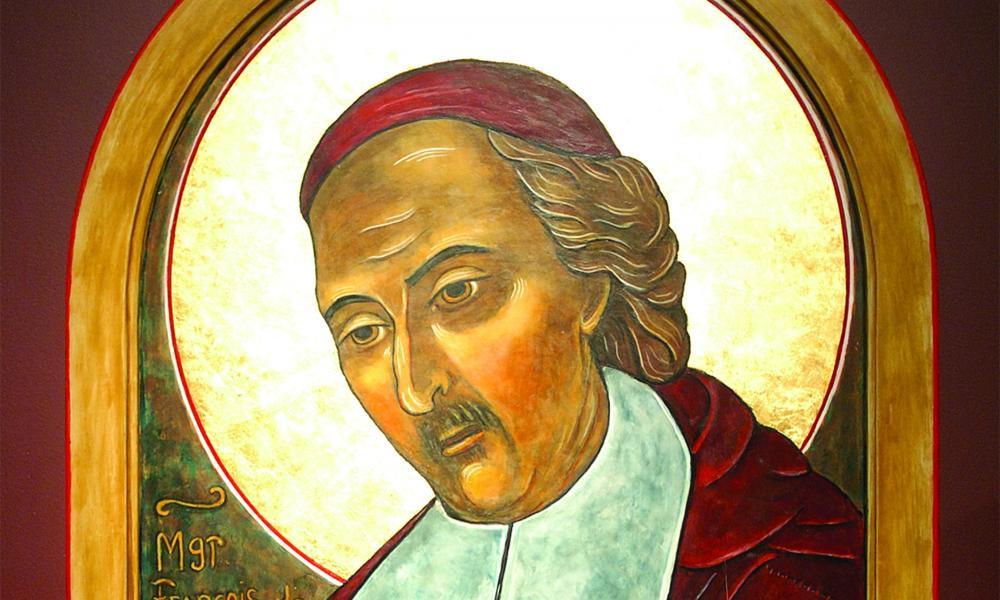 On April 3, 2014, Pope Francis signed the special decree proclaiming the canonization of two new North American saints: François de Laval de Montmorency and Marie Guyart, also known as Marie of the Incarnation. The two missionaries will be the first saints ever with direct ties to Québec City, which was their home base.

The Archdiocese of Québec was the first see in the New World north of Mexico. According to the Catholic Encyclopedia, the Diocese of Québec “comprised all North America, exclusive of New England, the Atlantic seaboard and the Spanish colonies to the West, a territory now divided into about a hundred dioceses.” That means that many of our dioceses have St. François as one of our bishops’ predecessors.

Born into an illustrious family, St. François de Laval (1623–1708) walked away from a life of wealth in order to dedicate his life to the service of the Lord. Eventually, he was ordained a bishop and appointed the apostolic vicar of New France in 1658. At the time of his arrival, Québec had barely 500 inhabitants and there were only about 2,200 French in all of Canada.

Fifteen years later, in 1674, he became the first bishop of Québec when it was made into a diocese, which, according to Most Reverend Paul-André Durocher, president of the Canadian Conference of Catholic Bishops, consisted of most of what is now Canada, much of upper New England and all the Mississippi Valley, extending even to the Rocky Mountains.

Despite the sheer size of his diocese, St. François established a parochial system and visited each parish, often either on foot, sometimes wearing snowshoes, or by canoe, in and out of season. He never missed a Mass or a day of fasting, even as his health began to decline. He is most noted for his work in defending the native population from exploitation, for his work with the poor and for his commitment to education (he founded both a major and minor seminary). Ultimately, he succumbed to an ulcer, which took his life on May 6, 1708.

St. François in his own words:

"Rest assured that, being sent to work for the conversion of the world, you have the most important task in the Church, which obliges you to be worthy instruments of God. The Spirit of God asks for a peaceful, collected heart, not a worried, drifting heart. We should have a joyful and modest face, avoid mockings and upsettings and as a general rule all that is contrary to a saintly and joyful modesty. But in the heart of all this turmoil, we must not be demoralized; if men have the power to destroy, Our Lord’s hand is infinitely more powerful to build. We need only be faithful to him and let him work. A nasty word, an impatient act or an unwelcoming face can often, in one moment, destroy all that we have built. We must be loved for our gentleness, patience and love. All that the hand of God does serves us wonderfully, though we do not immediately see the results. For many years Providence has led this Church, and therefore us, by tiresome and crucifying paths for both the spiritual and the temporal."

St. Marie of the Incarnation (1599–1672) was an Ursuline nun, theologian, spiritual adviser, mystic and businesswoman. She founded a convent and school that educated the daughters of the French settlers and the aboriginal peoples together. She spent 33 years of her life teaching, catechizing, leading the other nuns and working to find the funds to keep the community functioning in New France.

St. Marie is also remembered for her mastery of several of the native languages in the New World, which she made use of in teaching native children, in compiling catechisms and prayers in Huron and Algonquin and in assembling dictionaries in Algonquin and Iroquois. In addition, she composed more than 10,000 letters that serve as an important source for Canadian history. In 1672, she died at the monastery she had built. She was beatified on June 22, 1980, by Pope St. John Paul II.

St. Marie Guyart was married, gave birth to a son and was widowed, all by age 19. When she entered the Ursuline monastery in Tours, France, her distraught son (12 at the time) tried to storm the place with a group of his classmates. Later, this same son became the Benedictine monk Dom Claude.

The special decree used by Pope Francis was established in the 18th century by Pope Benedict XIV. According to L’Osservatore Romano, an “equivalent canonization” takes place “when the pope enjoins the Church as a whole to observe the veneration of a Servant of God not yet canonized by the insertion of his feast into the liturgical calendar of the universal Church, with Mass and the Divine Office.” It usually occurs when the saint has a long, well-established history of being venerated, but, for whatever reason, the formal canonization process has not been completed.