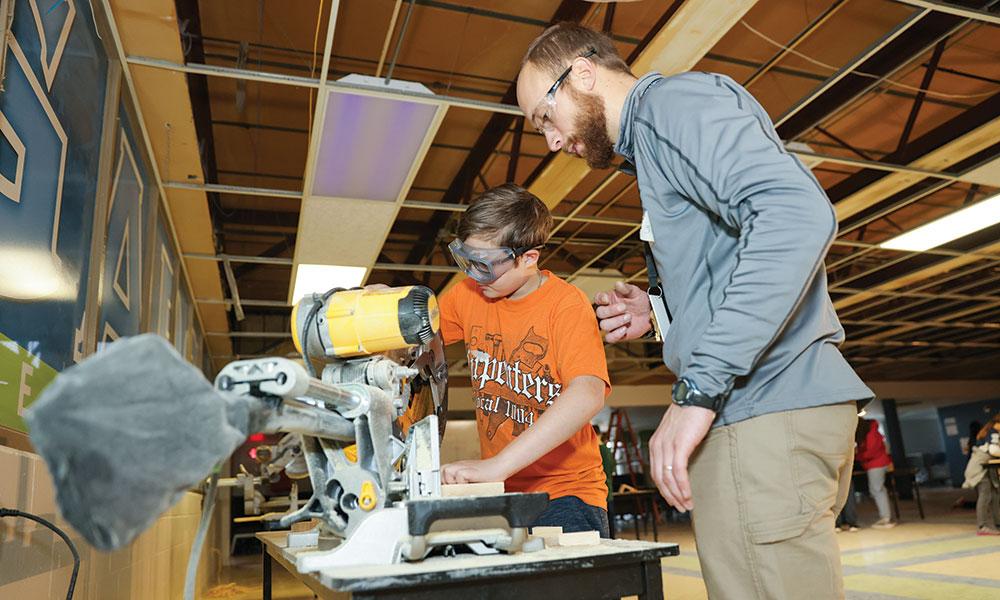 Teaching Kids to Create and ‘Do a Task Well’

It’s 9:30 on a Saturday morning, a time when most pre-teens and teens have barely budged from their rooms. At Lansing Catholic High School, though, the cafeteria is alive with the sound of power tools, hammers and students hustling to cut or measure boards.

Welcome to the Craftsmanship Club, a new, monthly venture meant to introduce middle school and high school students to the industrial arts and teach them the skills to take on their own projects.

It’s the result of club leader and civil engineer Greg Ingle’s prayerful discernment and own passion for craftsmanship, brought to fruition during the Year of St. Joseph in 2020-21 as he and his wife, Heather, prayed about how Greg could serve the Church with his gifts.

Married in 2020, the couple began a consecration to Jesus through St. Joseph. “My wife kept inspiring me to dream – ‘You’ve got to dream about where God is calling you to be,’” Greg says. “Then the idea came up – I always wanted to be a shop teacher. Shop class was always my favorite in school.”

Having attended Mason public schools, Greg noticed the lack of similar classes for diocesan students. He talked to friends and his pastor, Father Steve Mattson at Resurrection Parish in Lansing. “The next thing I knew, I was in a meeting with several different school administrators,” he says. “It turned out a lot of them had the same idea at the same time. So God brought it together.”

Craftsmanship, Greg believes, is more than training students to become future carpenters, plumbers or electricians – it’s an approach to life. “It’s the ability and mastery to do a task well,” he explains. “It requires a lot of attention, because you’re striving to be the best that you can be, to make something you can take joy and accomplishment in.”

Getting kids to become skilled tradesmen “could be a side effect” of the club, Greg says, “because you’re opening that door for children to get these experiences [and realize] this is something they enjoy doing.”

But Greg says the ultimate goal “is to equip students with the skills, confidence and critical-thinking ability to approach a task and say, ‘I can do that. I can fix what needs to be fixed or build something to serve a need.’ To help out their neighbor.”

The club, begun in the fall of 2021, meets monthly at Lansing Catholic and is open to middle and high school students in the diocese, including homeschoolers. Attendance gives Greg and the school administration a gauge as to whether there would be interest in a shop class offered as an elective.

So far, that interest has exceeded Greg’s expectations, with 60 students attending the first meeting.

He begins the meetings with prayer, then an introduction to the day’s goals: the project they will be working on, or a concept – such as measuring in 1/16ths of an inch – that will help them going forward. Greg and his adult volunteers offer safety demonstrations of the tools they will be using before the students begin their work.

“I think we underestimate the ability of kids,” Greg says. “If you instruct them how to use a tool safely and what the consequences are of misusing it, they do really well. I see it all the time – they’re really cautious, they don’t want to touch it. But we’re showing them, you don’t need to be afraid. You can use this tool for good, and what it was intended to be used for, and you can do great things with it.”

Stella Gates, a sixth-grader at Resurrection School, was one of those cautious kids.

“I was definitely nervous I’d snap my finger off or something crazy like that,” Stella says, “but the table saw was really cool to learn.”

There was about an equal number of boys and girls at the December 2021 meeting, and Greg says he’s been “thrilled to see the number of girls who’ve come out.

“It’d be great to see more women in the trades,” he says. “It’s not strictly a male occupation.”

Thirteen-year-old Dominic Bloomfield is homeschooled and says he’s used “some of these tools” while working with his grandfather. This was his first time attending, and he thinks it would be cool to learn how to build furniture.

Greg would love to get students to a place where they can pick their own projects – such as furniture – or even provide an open space for families to come work with tools they don’t own themselves. Carpentry skills are a necessary foundation, he says, but he dreams of expanding to basic mechanics, simple electrical circuits or metalworking.

For now, though, the students use tools that Greg hustles up from friends each month, and they need a dedicated space to work. He’s on the lookout for donated tools or financial donations to buy them, even as he’s encouraged by what he sees as a shared desire among the community to bring this opportunity to its students.

“Jesus was a carpenter,” he points out. It’s a type of work that “aims at self-perfection, service of others and the glorification of God.”

Teaching that work and awakening those values in students have been a privilege.

“Just as God formed the world, we get to create,” Greg says. “And that’s a great gift to participate in.”

For more information on the craftsmanship club, contact greg.ingle@lansingcatholic.org